A sunny, euphoric weekend in New York was briefly interrupted on Sunday by a severe wind storm, which sent heavy debris raining down from high-rises and left multiple people with serious injuries.

A spokesperson for the FDNY says three people were hospitalized on Sunday afternoon, after unsecured scaffolding belonging to a boutique condo in Park Slope crashed down into the patio of Mission Dolores. Kathleen Keating, 33, was critically injured, while two others were said to have suffered serious but not life-threatening injuries.

Keating's father told the Post that his daughter was hit in the back of the head, and is now on a breathing tube at Brooklyn Methodist Hospital.

JUST IN: At least three people were hurt when scaffolding collapsed in Brooklyn on Sunday afternoon. https://t.co/v8X0qNNg26

currently in NYC and there is a storm with strong winds and the rain is literally going upside down. it is falling and then going back up and then falling again

"I thought it was an earthquake," one witness told CBS News. "I heard some commotion outside and people were screaming."

On Instagram, Mission Dolores announced that it is closed today.

The source of the falling metal poles appears to be a new 12-story development on Fourth Avenue and Carroll Street, known as Parlour Condominiums. Sales for the building's 19 units—which start at $1.6 million, and are billed as "the memory of a brownstone"—launched this past March, though construction is ongoing.

The project, developed by Brodmore Management, has received dozens of Department of Buildings violations in recent months, including one this past May for failing to certify the correction of an "immediately hazardous" condition. A stop-work order was issued on Sunday related to the scaffolding collapse (Representatives of the building did not respond to Gothamist's inquiries). 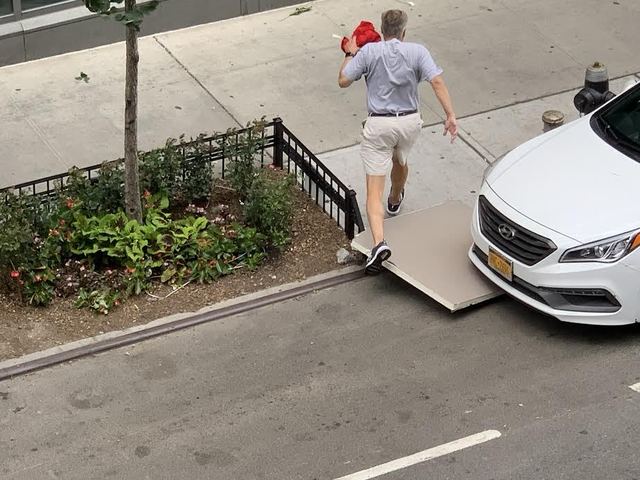 A person seeking shelter from the wind near Hudson Yards on Sunday. (Courtesy Nic Garcia)

Over in Manhattan, the powerful squall also hit Hudson Yards, which is quickly earning a reputation as a howling wind funnel.

Photographer Nic Garcia tells us that when the powerful squall passed through at around 3 p.m. on Sunday, "big 3-4 foot pieces of cardboard were blowing off a very tall residential building" near West 33rd Street and 11th Avenue. Check out video of the harrowing situation:

A few people were nearly "hit badly," according to Garcia, and one person reported finding themselves stuck in a "cyclone of litter."

I visited Hudson Yards, a very expensive wind tunnel, for the first time and got caught in a cyclone of litter, which seems about right.

#cyclone of litter
#hudson yards
#park slope
#weather
#wind
Do you know the scoop? Comment below or Send us a Tip