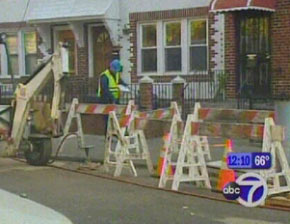 The 69-year-old woman who was burned over 90% of her body in a gas explosion in her Sunnyside home died yesterday. City Councilman Eric Gioia said, "It is with great regret and sadness that I announce the passing of Kunta Oza. My deepest condolences go out to her entire family, and I ask that all New Yorkers keep them in their Thanksgiving prayers."

On Wednesday afternoon, calls were made to 911 about a gas smell on 41st Street near 48th Avenue around 3:30PM. While Con Ed and the Fire Department responded, Con Ed decided it didn't need the FDNY and could not find the leak. No one was evacuated. An hour later, an explosion occurred inside the house where Kunta Oza was watching over her grandchildren. With a two-alarm fire raging and the gas leak still present, 200 people on the block were evacuated.

Gioia had been questioning Con Ed's response to the gas leak, wondering why, "if the smell of gas is so thick that people on the entire block were calling Con Ed, why did they dismiss the Fire Department? Why didn’t they evacuate the block? Why didn’t they shut off the gas and electricity?" Con Ed has said that the leak was detected in a manhole under a car and that a home different than the Oza's had complained of the gas smell.

Gioia wants an independent investigation of the matter and City Councilman Michael Gianaris added, "When Con Ed is potentially to blame for something, they won't do anything to accept responsibility. They will point fingers and they'll pass the buck and if we allow them to tell us what happened here we make a huge mistake."

A neighbor who was walking on the street with his sons told the Daily News, "Think twice every time you walk past someone's house and smell gas. Run."