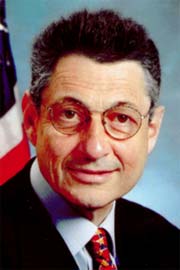 Assembly Leader Sheldon Silver is up for re-election this fall, and while he's likely to win it, one woman is making sure one of his challengers has her help: The Daily News reports former Assembly staffer is helping challenger Paul Newell with his campaign because Silver "ignored her accusations of rape against one of his top aides" back in 2001.

Elizabeth Crothers told the News, "I see it as the only opportunity to bring real reform to New York and to unseat one of the worst leaders in the state and quite possibly in the nation." Crothers, now 32, was working for an upstate Republican when she claimed Silver's counsel J. Michael Boxley "forced her to engage in a sexual act" in his Albany apartment in January 2001. Silver defended Boxley and by March 2001, after an inconclusive internal investigation, Crothers (who never filed criminal charges) and Boxley agreed not to sue each other.

Then two years later, Boxley was accused of raping a 22-year-old aide. He was arrested at Silver's office, admitted to sexual misconduct and temporarily lost his law license. In 2004, after another Albany legislator sex scandal, Crothers told the Times, "There is very little respect for employees [in Albany]. Legislators and senior staff have somewhat of a superiority complex that staff is there to serve.''

I was wrong about Michael Boxley, and as a father and a grandfather, I have tremendous anguish about what Elizabeth Crothers went through.

I am deeply dedicated to ensuring that every woman in this state feels safe, and have devoted much of my career to protecting the rights of victims of sexual abuse, strengthening laws against rape and sexual violence, and providing resources for the treatment of survivors.

But Crothers, who believes Silver belittled her complaint to protect himself, isn't satisfied, "It would have made an enormous difference in my life if he had said [that] seven years ago."

#Albany
#Elizabeth Crothers
#J. Michael Boxley
#Paul Newell
#sexual assault
#sheldon silver
#state legislature
Do you know the scoop? Comment below or Send us a Tip
A new Gothamist is coming! We’ve moved comments over to our beta site. Click here to join the conversation and get a preview of our new website.