A 29-year-old Williamsburg resident says she was sexually assaulted by a man on a Manhattan-bound L train Thursday, and she spotted him on the train platform on Friday morning. 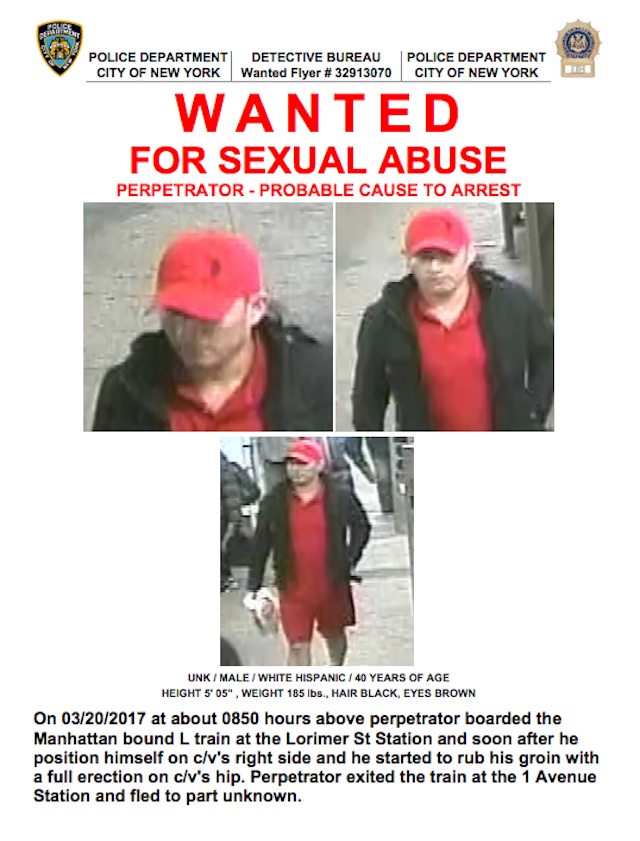 The victim, who spoke to Gothamist on the condition of anonymity, says she was attacked onboard the L train between the Grand and Graham stops at around 8:20 a.m. Thursday. "I don't notice anybody because I have headphones on, I'm listening to my podcast. He got on at Grand and the train is so packed at this point I was already getting elbowed," she told us. "I wasn't paying attention to my space being invaded." Then, she felt something touch her bottom. "I just kind of ignored it at first. I was already getting elbowed and thought maybe it was someone's backpack."

She quickly noticed that something wasn't right. "I turn around and see this man. I'm like 5'7 and his head is at my shoulder," she said. "He had this bag he perfectly held where I couldn't see." The victim says though she wasn't sure what was touching her initially, she realized he was touching her with his erect penis. "I felt his body temperature as he became erect," she said. "He took it out of his shorts, put it between my legs, and rubbed against my body." She says the suspect got off at Graham Avenue.

The victim told Gothamist she reported the incident to police when she got to work, and has been working with the Special Victims Unit's transit department to hunt down her attacker. But when she went down to her L station Friday morning, she spotted the suspect across the platform. "I knew it was him. He was letting trains go by, not getting on the train." Though she did not immediately contact police ("I easily could have called the cops but I was too afraid to make a move," she said) she did manage to capture cell phone video of him:

She quickly contacted the detective with whom she was working and IDed the suspect via a WANTED poster dating back to March 20th, that described him committing a similar assault, also on the L train. "This man is clearly a routine offender. he preys on women on packed trains during their work commute," she told us. "While I saw him this morning, he allowed many trains to go by as they weren't packed enough since its a holiday, he did not board any trains."

Though the victim is still shaken by the incident, she says she hopes speaking out about it will protect other women from being attacked. "As a woman, I've thought, if any guy ever did that to me, I'll be strong as I want to be," she said. "But when it actually happened, I was frozen." She suggests women who find themselves in similar positions report the incident as quickly as possible. "I'm hopeful we can still catch him," she said, noting that the NYPD "seems to be really on top of it."

The NYPD confirmed to Gothamist the incident is under investigation by the Special Victims Unit. Last night, the police released details about the incident, describing the suspect as being about 30 years old, 5-3"-5'6" tall and 150 pounds with a mustache. He was last seen wearing a red baseball cap, green shirt, black jacket, dark blue jeans and black sneakers.

#assault
#brooklyn
#l train
#subway
#subway pervert
#williamsburg
#original
Do you know the scoop? Comment below or Send us a Tip
A new Gothamist is coming! We’ve moved comments over to our beta site. Click here to join the conversation and get a preview of our new website.