Over 4,000 people were evacuated from Liberty Island on Wednesday afternoon after an anti-Trump protester scaled the base of the Statue of Liberty to protest the administration's zero tolerance immigration policy, then reportedly refused to come down until "All the children have been released."

In pink sneakers and waving a shirt that read "Trump Care Makes Us Sick," the determined climber remained at the edge of the statue's copper robes for about three hours, as police pleaded with her to come down. At around 6 p.m., police joined the woman at the statue's base—around 25 feet above the observation area—and took her into custody.

The woman has since been identified as Therese Patricia Okoumou, a Staten Island-based immigrant activist and member of the group Rise and Resist. Earlier in the day, Okoumou and dozens of other group members unfurled an "Abolish ICE" banner at the statue's pedestal. While members of Rise and Resist initially said that Okoumou was not affiliated with them, the group later noted that she was part of the banner action, but stressed that her choice to scale the statue was her own.

"The person who climbed the Statue of Liberty was one of forty participants in our planned banner action, but her decision to climb the statue was made independently of the group, without consulting any other member of the group," the statement reads. "We understand and share her desire to see the immediate release of children from detention and reunion with their parents." 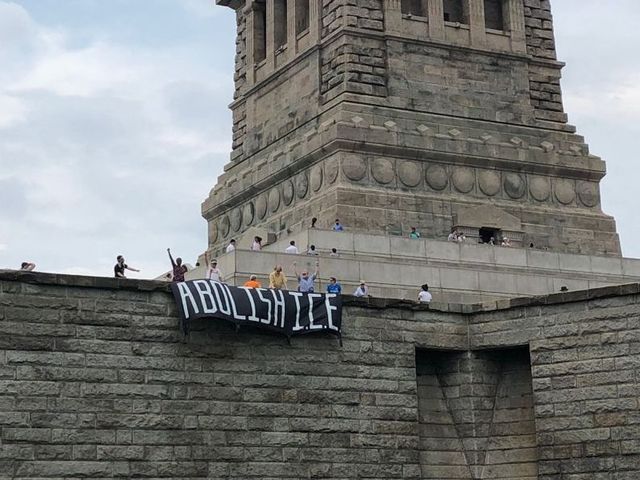 (via Rise and Resist NYC)

During a press conference on Thursday morning, NYPD personnel explained how they "rescued" the protester. "She basically threatened to push us off, push the ladder off. But we were persistent, stayed up there," Emergency Service Unit Detective Brian Glacken told reporters on Thursday morning. After a few hours, the cops and the climber built up a "good rapport," Glacken added, noting that "She apologized to [Detective Chris Williams] and I for having to go up to get her."

Other officials, meanwhile, were simultaneously impressed by Okoumou's dexterity, and angered by her method of protest. "The facade of the monument there is a granite rock-like surface that the average person wouldn't be able to scale," said National Park Service spokesman Jerry Willis. “I'm really sad for people who had to leave the island or who weren’t able to get over here at all."