Cindy Klumb spends her days running the drawing center at Pratt Institute, the arts and engineering school in Clinton Hill, Brooklyn. Among other duties, she manages payroll for the center's nude models. On weekends, she likes to paint. Or she did.

"I can do a little bit of watercolor, a little bit of drawing, but unless physical therapy fixes my arm, my painting days are over," she said on Thursday afternoon. She showed that she has trouble lifting her right arm above her belly-button, putting the easel out of reach.

Klumb is still recovering from being hit by a driver while trying to cross Myrtle Avenue back in January. She was leaving work around 5:45 p.m. on January 11th and had stopped at the Key Food on Myrtle at Ryerson Street to pick up a few things before heading home to Gravesend. Ryerson ends at Myrtle, forming a T at the Key Food, and the intersection is pocked with potholes and exposed layers of street strata. It lacks a stop sign or traffic light. 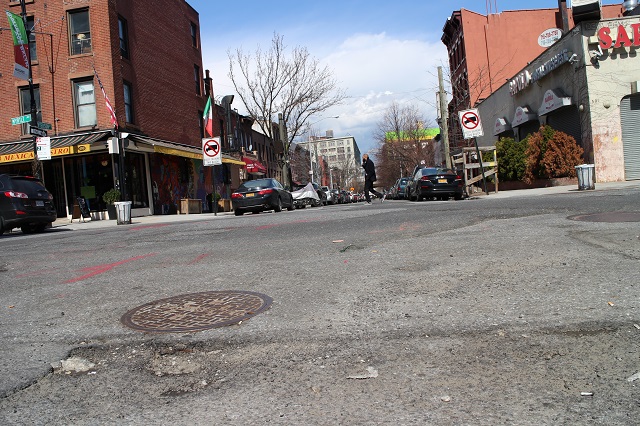 Looking across Myrtle in the direction Cindy Klumb was crossing when a driver hit her. (Nathan Tempey/Gothamist)

Klumb said the two nearest stoplights, one and three blocks away in either direction, were red when she stepped out into the road, but that she tripped on an edge in the distressed street and went down hard, losing her glasses on the way.

"I'm 63 years old, so I don't bounce straight to my feet," she remembered.

As she tried to get back up, she heard a woman scream, "There's a car coming!"

She says she had risen to a crouch when she felt the bumper hit her in the back.

"I went down face first on the pavement," she said. "The next thing I remember is the shadow of the car going over me." 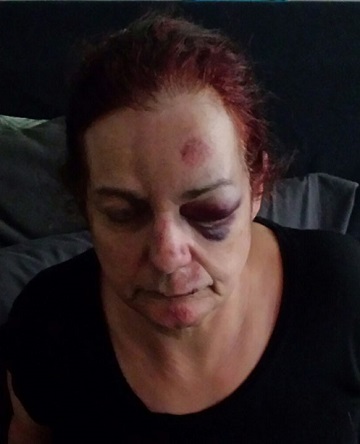 Cindy Klumb the day after the crash (Cindy Klumb)

None of the wheels hit her. People ran to her from all directions. A group of people stopped traffic, picked her and her things up, and carried them out of the street. And that's when things started to get weird.

Pratt student John Cisneros was also leaving Key Food that evening and says he saw the driver of a light-colored minivan hit Klumb. The driver stopped about 50 feet up the road and was one of those who rushed to help Klumb, Cisneros recalled. A female good Samaritan with medical training tended to Klumb as Cisneros called 911, then Cisneros relayed instructions from the FDNY as paramedics headed to the scene.

The ambulance arrived, and shortly after, a patrol car. One of the responding officers, Officer Orlando Vargas, had begun interviewing the woman helping Klumb when Klumb says the woman spotted the driver hovering around the periphery of the crowd and pointed at him, yelling, "That's him! That's the one that hit her! That's the car parked down there!"

"She said, 'I tried to stop you! I looked you right in the eye! You're the one that hit her!'" Klumb said. "The whole time the officer's just standing there."

The driver objected, telling Klumb and the good Samaritan that it wasn't him, that a car in front of him hit Klumb. It took a lot of insistence on the unnamed woman's part to convince Officer Vargas to go talk to the guy, Klumb said. But as EMTs were loading her into the ambulance on a backboard she says that though her glasses were broken and she could only make out outlines, "I saw their body language. [The driver] relaxed when Vargas got there. It was almost like they had seen each other before." Then Officer Vargas let the driver go.

All through the ambulance ride, Klumb says, "I kept thinking, why isn't he detaining him? If this is the person that hit me, why did he let him go?"

Cisneros has a bit of useful information on this end: he says he saw the driver flash a badge to Vargas, and from then until he and Vargas left, wear the badge on a chain around his neck.

At Woodhull Medical Center in Bedford-Stuyvesant, Klumb learned she had two broken ribs, a concussion, and trauma to her neck and rotator cuff, but before she had completed the full battery of tests, Officer Vargas showed up at her bedside.

"I'm still bleeding, I've still got blood dripping off of my mouth and nose," she remembered. "He has no way of knowing if I'm going to make it." 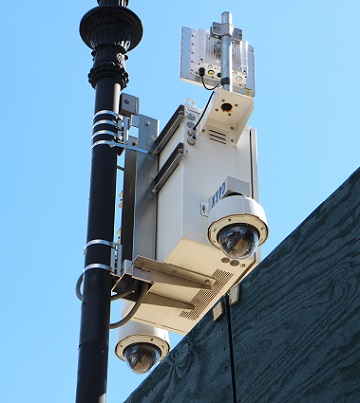 Cindy Klumb and her lawyer have yet to get the NYPD to turn over its footage from these nearby cameras. (Nathan Tempey/Gothamist)

Klumb says that at that point she stopped saying much to Vargas, because "something didn't feel right."

An emergency room doctor later told her that her rib was inches from severing her spine, and that the way she landed on her face could easily have led to permanent brain damage or worse.

"The doctor said it's a miracle I'm alive," she said.

Klumb's son took her home in a cab late that night and she spent eight days out of work, the first few of them unable to lift herself out of bed without an aid. Vargas's crash report, meanwhile, lists the crash as a hit-and-run, with no description of the vehicle or driver, and no record of him having talked to the female witness. Cisneros is listed as a witness, but he says the detective assigned to the case didn't call him until seven weeks after the crash, the same time that Klumb first heard from him.

By that point, Klumb had retained a lawyer, Dmitry Levitsky, and he was pressuring the detective, Charles Sperco, to move on the investigation. Levitsky says that during one phone conversation, Sperco actually acknowledged knowing the identity of the driver, telling him that he is an auxiliary cop. He does not have a recording of the conversation, he said, and Sperco did not pick up at a number provided for him.

Levitsky says police claim that footage of the evening from a traffic camera overlooking the crash area doesn't show anything useful, but adds that they have yet to turn over the video despite numerous requests. A video from the Key Food has also been slow in coming. Levitsky thinks it's pretty clear at this point that there has been a cover-up, or at the very least, a severe breach of protocol by Vargas.

"Any contacts I've ever had with police were nothing but pleasant," he said. "That’s the reason why I’m so outraged, not just as a legal professional but as a citizen, and as a resident of Brooklyn. In my opinion, it is despicable what this officer did."

Noting that he spent time working at the Nassau County District Attorney's Office, Levitsky said, "This whole notion of blue wall of silence is not alien to me."

The NYPD said an internal investigation into the handling of the incident is underway, but reps would not answer further questions about it. Levitsky plans to file a notice of his intention to sue in the next three weeks. While the legal processes play out, Klumb is still in physical therapy, and because the other party in the crash is missing, she fears tens of thousands in medical bills that her insurance has provisionally covered will be dumped back onto her. More than anything, though, she's angry at the cowardice of the driver.

"Ultimately, I want to find out what happened, who hit me, and why that person didn’t stand up and take responsibility for it," she said. "I want to know why his first reaction was to pull out a badge and not an insurance card."