A 20-year-old bicyclist was seriously injured after being struck by a driver in Park Slope last night. The force of the collision shattered the car's windshield, and a witness said that the cyclist's scalp was "left in the glass."

The collision occurred on the block between 9th and 10th Streets. Toby Cecchini, who had been walking by 6th Avenue and 9th Street said the driver "just exploded a cyclist literally right behind me on the intersection; so grisly, the cyclist ended up going through the windshield, his scalp left in the glass. He's still barely alive, he's not going to be for long." 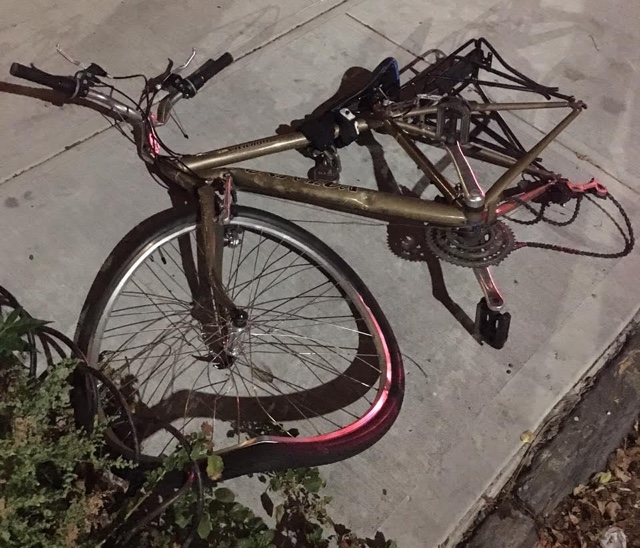 The cyclist's bike (Courtesy of a tipster)

The driver stayed at the scene; the witness added that the driver claimed "the cyclist came out of nowhere and veered into his path."

The driver has not been charged. The investigation is ongoing, and we'll update as more information becomes available.

Update: Cecchini sent us a long account how what he witnessed last night; he recalled a car "flying past" him and heard an "explosion" behind him after he crossed 6th Avenue and 9th Street. He said, "There had been no sound of brakes beforehand or any kind of engine noise... I thought the enormous noise must have been it striking its bottom struts or whatnot on a raised spot in the intersection. There was some bits of detritus I noticed in the middle of the intersection, and initially I wondered, did that guy just just tear his axle out? He must have been doing 50 down 6th Ave?"

Then he walked over to 6th Avenue between 9th and 10th Streets and saw a crowd of people who also stopped—then they realized a cyclist had been struck.

The cyclist had gone through the windshield head first, his scalp had been sheared off as though surgically and was stuck on the broken glass like a toupé. He was canted into the front passenger seat, his legs sticking out through the windshield still, or at least one it seemed to me, when I first looked in.

One of the young men who had been in the group behind me got in the car to help him, and I wonder if he pulled the cyclist's legs out of the windshield, because shortly after, when I was in the car, the cyclists legs were sticking out the passenger side door and his head was on the console.

He was still breathing, though oddly, his chest heaving in a staccato manner. He was not conscious, but in the off-chance he could hear or perceive in some manner, I began quietly telling him help was coming and he would be alright, anything soothing I could say, while crying and knowing this kid was very nearly dead.

I could still hear the driver outside shouting loudly that the cyclist swerved into him from nowhere and repeating it loudly over and over to different groups of people, which was making me angrier by the moment, coupled with the fact that he never looked into the vehicle to try to help, or even witness the carnage his insanely irresponsible driving had wrought.

Cecchini said the driver had yelled, "Oh my fucking god, where the fuck did he come from?!" as if to "exonerate himself at the scene."

Cecchini made himself available to four police officers to give his account of what he witnessed; apparently a sergeant detective, after hearing his description, said, "So...this [driver] was COOKIN'!"

"I said yes, exactly, and that the driver over there should be in handcuffs right now. He then walked me back to show him where I'd been when I heard the impact just behind me, what I'd done following, etc., before drifting off," Cecchini told us. The sergeant detective "didn't tell me anything that I recall about them needing me as a witness or any such, or how I might reach them. He just strolled off, perhaps he had other people to corral. As of noon today, I haven't been contacted by anyone connected to the police."

Aaron Naparstek, founder of Streetsblog, said, "It would be completely abnormal if anything were to come of this for the driver. If you can ever get ahold of the police report there's a chance that the only documented witness report will be from the driver. And good luck getting the report. The NYPD holds these like state secrets. Most likely the driver will be able to repair his car and get right back on the road. He could do the same thing again tomorrow."

He added, "How is it possible that in a city that is supposedly pursuing a Vision Zero agenda we don't have technology on the street, in cars and in cops' tool kits simply to determine the speed that vehicles were traveling after incidents like this? And the 78th is one of the City's best and most caring precincts too."

Cecchini walked to the YMCA on 9th Street to wash his hands, "The ladies were saying at the desk that they had heard the impact from there, and thought a bomb had gone off."

#bicyclist
#cis
#collision
#cyclists
#park slope
#original
Do you know the scoop? Comment below or Send us a Tip