Witness Claims Kimani Gray Was NOT Holding A Gun When Police Shot Him, Contradicting NYPD Account

As protesters continue to condemn the fatal police shooting of a Brooklyn teen, one witness has come forward to say that cops did not seem justified in killing 16-year-old Kimani Gray. Tishana King told the Daily News that she witnessed the confrontation from her third-story window in a neighboring building, and she tells the tabloid, "I’m certain he didn’t have anything in his hands."

Police said that on Saturday night, at around 11:30 p.m., two Brooklyn South Anti Crime plainclothes officers had been on patrol when they noticed young males near 473 East 52nd Street. According to the NYPD's statement, the cops noticed one "break away from the group upon noticing the police. The male... adjusted his waistband and continued to act in a suspicious manner. The officers exited their unmarked auto and attempted to engage the suspect, who turned on them, and pointed a .38 caliber revolver at the officers. Both officers fired at the suspect, striking him about the body."

Yesterday, Police Commissioner Ray Kelly had emphasized, "We have three [civilian] witnesses, two of which said that one of the officers shouted 'Don't move' and 'Freeze.' Two witnesses also said they heard officers say, 'What do you have in your hands?'" However, King, a medical records clerk at Kings County Hospital, said that after the shooting, one of the cops put his hands on his head and said, "Oh, God!" She told the News, "His partner went over to him and put his hand on his shoulder and said, 'Are you okay, buddy?'" 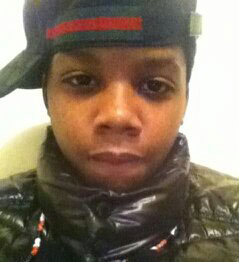 During her interview with the police hours after the shooting, the News reports that she "never said a word about whether Gray was carrying a gun." The News listened to the NYPD's taped interview with King and reports that "detectives and Internal Affairs Bureau investigators never asked directly if King saw Gray with a gun, and a police source said NYPD policy precludes asking such leading questions." Their source explained, "They’re just asked to say what happened in as much detail as they can remember."

Now King tells the News that when she saw the cops get out of their car, "Kimani started backing up. The cop took out his gun and started firing at Kimani." She noted that she was able to see clearly because of the streetlamp (see photo of her perspective), "His (Gray’s) hands were down. I couldn’t believe he let off (fired) his gun. There was no reason. No false move." However, the News' police source says King never said anything about the teen backing up with his hands.

The NYPD hasn't identified the police officers involved in the shooting—the Post reports, "It emerged that the two cops who fired at Gray, who was black, are both minorities. One, a sergeant is a dark-skinned Egyptian who identifies himself as black. He fired four times. The other, a Hispanic officer, fired seven times." (It's unclear how many times the teen was hit.)

A Monday night vigil to remember Kimani turned violent when a "splinter group" separated and trashed stores and beat up people. A vigil last night was largely peaceful, though perhaps that was because there were many police officers in riot gear as well as mounted cops.

A source tells the Post that a "Bloods offshoot, the Outlaws, ordered a hit on any city cop in retaliation for Gray’s death." It's believed that Kimani, who had an arrest history, was a member of the Bloods. The source said, "They [police] have intelligence that they [the gang members] put a hit out on a cop. They want a life for a life."