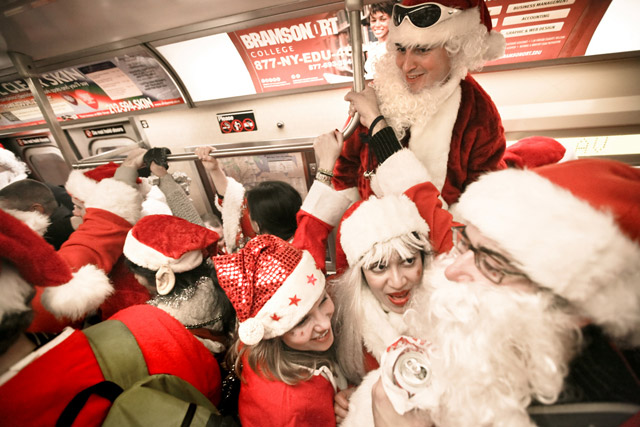 Photograph of Santacon Santas on the subway by sgoralnick on Flickr

There's nothing like "nightmare scenarios" to make the MTA's financial crisis seem even more grave. The Daily News explains,"Riders at some 150 subway stations will see service cuts," like fewer staffers, if the MTA does not get a bailout. The Straphangers Campaign worries, "In many cases, the cuts would force riders to enter through scary, unstaffed stations entrances." Plus some stations, like those along the N line, will be shut down over night.

The MTA is expected to adopt the so-called "doomsday budget on Wednesday; cuts and fare hikes (which would be preceded by hearings) won't go into effect until next year. The only way to lessen the severity of cuts and fare hikes would be if the state approves bailout suggestions (as in the ones the Ravitch Commission offered).

With fares rising one way or another, it's interesting to know how one thrifty Brooklyn resident saves $10/week on her subway commute: Georgette DiFini takes discarded Metrocards and sees if there's money left! She explained to the Post, "People just see 'insufficient fare' and drop it. But two out of five cards always has something on it."

And some more food for thought: Between 2003 and 2007, NYC jobs and population grew while bus and subway ridership went up... and vehicular traffic went down. The Department of Transportation told the NY Times, "What you see is that for the first time since at least World War II, all of the growth in travel in the city has been absorbed by non-auto modes, primarily by mass transit."

#fare hike
#metrocard
#MTA
#MTA budget crisis
#Ravitch Commission
Do you know the scoop? Comment below or Send us a Tip