With 'Tenant Assured,' Landlords Have An EZ Way To Sift Through Your Entire Online Profile

As if finding an affordable roof and four walls weren't already nearly impossible, a new British startup has developed software that makes a fickle landlord's job even easier—Tenant Assured combs and crunches a potential renter's Facebook, Twitter, Instagram and LinkedIn, calculating everything from your "credit" (how often do you post about, say, shopping or expensive travel?), to your "financial stress level" (maybe you tweet about your student debt), to how "agreeable" you are.

Assessing the startup this week, a Washington Post reporter submitted herself as a guinea pig, and was fed a list of her closest friends, a breakdown of her personality traits, and a rundown of every time she's tweeted the word "pregnant" or "loan."

The service also spits out a profile picture, raising concerns about race-based discrimination (a thing Airbnb has recently tried to defend itself against). 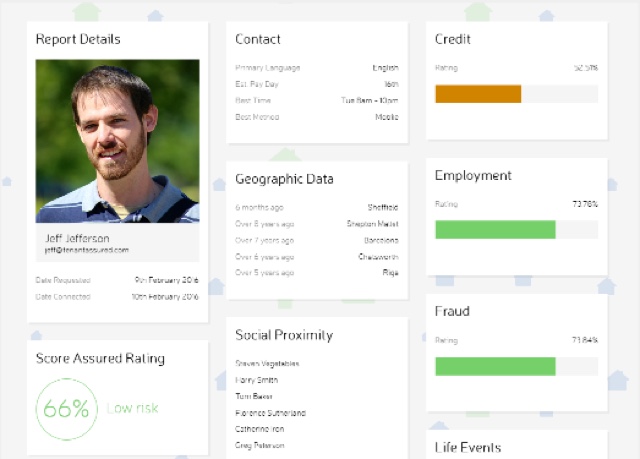 A sample tenant report (via).

Here's how the living nightmare of the privacy-conscious plays out: a landlord sends an e-mail request via Tenant Assured, prompting the potential tenant to grant permission for a search. With permission, the software combs public and private posts—not just your tweets, but your DMs and Facebook messages, too.

The final report goes straight to the landlord, skipping over the possible tenant, who's given no option to look over, much less challenge, the analysis. Plenty of the aggregated information is protected under the Fair Housing Act of 1968—a fact co-founder Steve Thornhill doesn't seem to be worried about.

"If you're living a normal life, then, frankly, you have nothing to worry about," Thornhill amazingly told the Washington Post. He also somehow said the following combination of words with a straight face: "All we can do is give them the information. It's up to landlords to do the right thing."

It turns out the "right thing" is based off of highly subjective character assessments. From the website's FAQ section: "If an applicant is using a lot of negative words and regularly argumentative online, then he/she will likely have a negative online reputation. And vice versa." Get ready for more Orwellian apartment-hunting Style section stories! Are You Just Too Negative To Have A Home?

As for laws that might protect against this sort of digital snooping, New York-based attorney and privacy advocate Abi Hassen says this example only reiterates our need for a stronger legal framework.

"Part of the problem is we don't have laws to protect our privacy," he told us. "We don't have a digital Bill of Rights.... [This app] isn't violating a particular law, but it helps skirt the intent of anti-discrimination laws."

Score Assured, which owns Tenant Assured and plans to launch versions of the service this summer for employers, Tindr users, and families seeking, say, a dog walker or a nanny, did not immediately respond to our request for comment. It's as-yet unclear if any NYC landlords are testing out the service. But tenant advocates and attorneys say the implications are alarming.

"Landlords try and spy on rent stabilized tenants as a means to kick them out of their stable homes. It happens all the time," said Cea Weaver of the Crown Heights Tenants Union. "This is just giving landlords another tool to frivolously take tenants to court or unlawfully evict them from their homes."

Robert Desir, a staff attorney for the Legal Aid Society who represents tenants, told us on Friday that while many landlords pore over credit scores and go to housing court for background on potential tenants, he's never heard of such an acute analysis tool.

"It makes me nervous when I think about the people we represent, who don't really have a voice," he said. "Right now we're seeing a lot of discrimination based on source of income, which is illegal, [and] there's always the race discrimination that goes on."

"With the behaviors we've seen from landlords," he added, "this gives them more ammunition."

Here's a promotional video for the service, set to the tune of the apocalypse:

UPDATE: This piece has been updated with a comment from attorney Abi Hassen.

UPDATE 6/17: An earlier version of this story incorrectly attributed reportage to the Wall Street Journal, rather than the Washington Post.

#affordable housing crisis
#landlords
#tenant sure
#tenants rights
#the future is now
Do you know the scoop? Comment below or Send us a Tip