With Puerto Rico Victory, Clinton Says "It's Not Over" 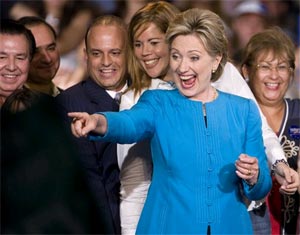 Senator Hillary Clinton won the Puerto Rico primary with about two-thirds of the votes over Senator Barack Obama. However, there was low voter turnout in what was considered an expected victory for Clinton, who campaigned vigorously on the island.

Clinton campaign chairman Terry McAuliffe used the win to point to Obama's problems connecting with Latinos, telling reporters, “It was a 100 percent Hispanic primary and it shows that he has a problem with the Latino community...He cannot close in this key core constituency." Some exit poll information: 31% of voters polled found race important (and 63% of them voted for Clinton) and 34% said they didn't know enough about Obama, while one 16% said that about Clinton.

Still, Obama will, according to the AP, pick up 17 of Puerto Rico's 55 delegates and got the support of two superdelegates. Though many Democrats (even Clinton supporters) wonder why she's still running, she continued to emphasize her larger percentage of the popular vote and said, “My political obituary has yet to be written. It’s not over til it’s over.”

One thing that will be over: The primary season, as the very last one are on Tuesday in South Dakota and Montana.