With NFC East Title in Hand, Giants Head To Dallas 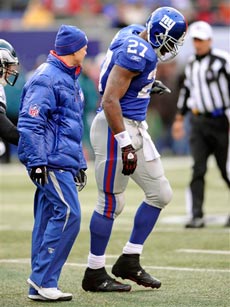 The Dallas Cowboys lead the league in distractions. The owner has ripped his star running back for being hurt. Terrell Owens is unhappy with the offense and blames Tony Romo for throwing too often to tight end Jason Witten. Owens even thinks that Romo and Witten meet secretly to create plays. Meanwhile, the defense supports Owens and feels that the coaches are too quick to blame the players. It's the NFL's best soap opera.

Enter the Giants, who are struggling with their own distraction and need to prove that they can win without Plaxico Burress. After last week’s uninspired play, New York needs to reestablish itself as a dominant team and they will have to do so without Brandon Jacobs. Dallas may be without its star running back as well because Marion Barber has an injured foot and will be a game-time decision.

The one thing New York has shown throughout their recent run of success is the ability to take a punch and respond. They took the punch last week and the bet here is they respond this week. It will not be easy, Texas Stadium is a tough place to win, but New York will find a way.

#brandon jacobs
#football
#giants
#plaxico burress
#sports
Do you know the scoop? Comment below or Send us a Tip