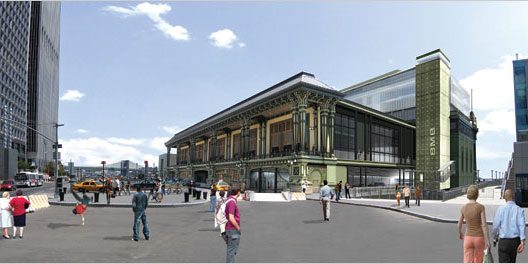 The NY Times has some new news on the Battery Maritime Building. They pose the question, "What if you had a majestic skylighted, columned hall in a Beaux-Arts ferry building at the tip of Manhattan and were required to use it as a public space? What would you do with it?"

This is something that Dermot along with Rogers Marvel architects have been slowly figuring out. Plans were set to include a 140-room boutique hotel, a restaurant, a lounge, and a specialty foods marketplace; but not even a month later at least one of those things has been nixed. Turns out the Great Hall in the building, which was going to hold a marketplace, isn't quite suitable. The 10,000 square-foot space is "radically inadequate in size," according to Dermot.

So what will inhabit the sparkly new Hall? "Dermot executives, who plan to spend $30 million on the Great Hall alone, have not ruled out other food-related uses for the Great Hall, including cooking demonstrations or food boutiques." Another idea on the table is to include an exhibition space. Tonight the developers will meet with locals at a public forum to discuss further options (if you'd like to attend, it will be held at 80 Greenwich Street, 6:30pm). Those on the community board want to ensure the Great Hall remains open to the public; under Dermot’s agreement it could also be used for private events.

The rehabilitation of the century-old Battery Maritime Building’s decayed interior will cost a pretty penny, and the city has already spent $60 million alone in stabilizing the ferry slips.