With 3 Golds In Hand, Phelps Has Two Races Tonight 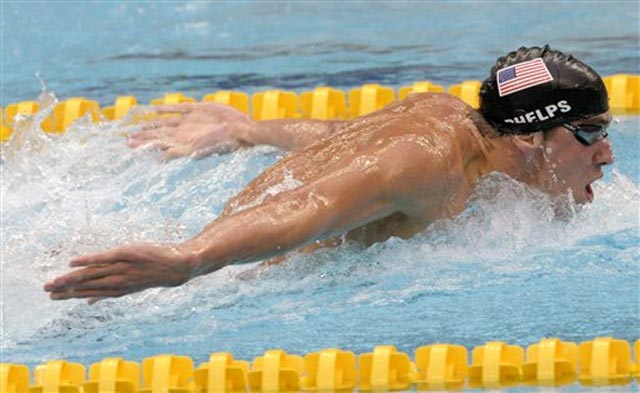 After setting yet another world record last night in the 200m freestyle, swimmer Michael Phelps racked up his third gold medal at these Beijing Olympics. And he has two finals, the 200m butterfly and 4x200m freestyle relay, which will air tonight in the United States--the 200m fly at 10:18 p.m., the 4x200m relay at 11:16 p.m.

While there's attention on whether Phelps can get a record eight gold medals at these games--NBC's Olympics website has a section on Phelps's "Quest for Olympic History"--yesterday he played down that talk, saying, "I'm not even halfway done yet. I've done everything I wanted to do so far."

With his six gold medals from Athens, his total of nine golds has now tied him with swimmer Mark Spitz, as well as sprinter Carl Lewis, middle distance runner Paavo Nurmi and gymnast Lariss Latynina, as having the most gold medals in the Summer Olympics. The 23-year-old marveled, "To be tied for the most Olympic golds of all time with these names in Olympic history, it’s a pretty amazing accomplishment.”

For some Olympics levity, try NBC's guess- which- male- swimmer's- abs- these- are game. The Observer noted, "It sounds like a game you might play on Queerty or something, but you can just do it on, you know, NBC's Olympics Web site."

#2008 olympics
#beijing olympics
#gold medal
#michael phelps
#olympics
#swimming
Do you know the scoop? Comment below or Send us a Tip