Starting today, you'll now be able to obsessively check your email, Twitter, and Facebook accounts in more subway stations than ever before. The MTA and Transit Wireless announced this morning that wireless voice and data service is now available at 30 new subterranean stations, including Times Square, Lincoln Center, and Columbus Circle. This brings the total number of connected stations to 36, as the first six got WiFi in Chelsea in September 2011.

For now, wireless access is only available for T. Mobile and AT&T users, but Verizon and Sprint customers shouldn't fret—their carriers are in final negotiations to participate, and service should be available later this year. The project's cost, estimated at up to $200 million, will be covered by Transit Wireless and the carriers. The end goal is to have all 277 underground subway stations online by 2018, though the team hopes to have it completed by 2017. 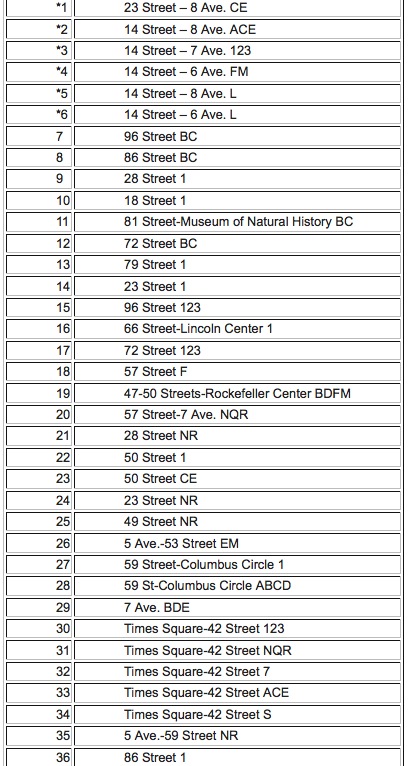 Now, instead of waiting by the turnstiles, frantically waving our phones around in a futile attempt to get a signal, you can answer emails in between subway transfers and never have an excuse for being offline! The equipped stations also enable commuters to make and receive phone calls, which the MTA believes will increase safety in the stations, as commuters can now call 911 more easily.

Officials at today's press conference in Times Square deflected questions about whether the newly equipped stations were more at risk for terrorism (something on everyone's minds given the recent attack in Boston, which officials believe were carried out by remote detonators), assuring reporters that they were working diligently with the city's counter-terrorism units.

Nobody in the newly WiFi-equipped Times Square seemed too worried, however. Melvin Tunstall, an Upper West Side resident, told us this morning that he hadn't considered the potential threat from underground wireless access. "There are certainly some risks," he said. "But there's always good that comes along with the bad." Tunstall added that he was looking forward to being able to access Google maps and other location-based services. "We're a smartphone society," he added. "I'm excited to see how it will progress."

Nobody knows, but at least now we'll be able to hail a cab from the subway station when the system fails us.

#subway
#technology
#wifi
#original
Do you know the scoop? Comment below or Send us a Tip