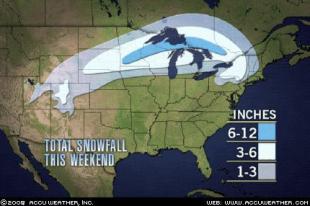 Weather and climate are different things. The former refers to day-to-day changes in the atmosphere, while the latter is a result of longer-term variations. The two can often be out-of-sync, which is why Gothamist gets violently agitated when people, on an unseasonably cold day, say "how can there be global warming, it's cold today," with the self-satisfied chuckle that goes with being a complete tool. Tomorrow, however, weather and climate will be walking hand-in-hand.

Climatological winter, the three coldest months of the year, begins tomorrow. To kick off the festivities the first incursion of really cold air this season will arrive in the city. The airmass, which has brought below zero temperatures to the Midwest, will cool us down to the 20s tonight and it will only warm up to the mid-30s tomorrow. It'll be breezy tomorrow as well, making it feel more like the mid-20s.

There's a slight chance of snow Saturday night as temperatures dip to the low-20s in the city and to the lower teens inland. Sunday afternoon we'll be on the extreme southeastern edge of the season's first big snowfall. Expect a good chance of a "wintry mix", consisting of snow and bouncy sleet that will eventually turn all to rain. Sunday afternoon's high will again be in the mid-30s. Monday may bring a brief respite from the cold, but another arctic air mass should arrive Tuesday to keep much of next week on the chilly side.

#cold
#global warming
#gothamist
#joe schumacher
#maps
#news
#people
#photos
#rain
#snow
#the city
#weather
#winter
Do you know the scoop? Comment below or Send us a Tip
A new Gothamist is coming! We’ve moved comments over to our beta site. Click here to join the conversation and get a preview of our new website.