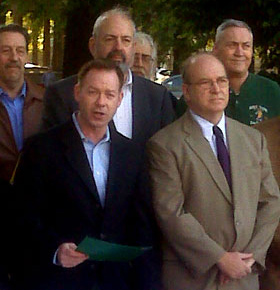 Windsor Terrace residents were joined by Park Slope Assemblyman Jim Brennan and local community board members at a rally to decry a proposal that would completely bar cars from Prospect Park for three months next summer to study the traffic impact. Last month Transportation Alternatives delivered a petition to Mayor Bloomberg signed by 10,000 people who want the park to be totally car-free.

At Thursday's rally, Community Board 14 Chairman Alvin Berk told the Brooklyn Paper, "During the morning rush hour, it already backs up. Closing the park would create additional backups and additional exhaust." And according to Streetsblog, Community Board 7 chair Randy Peers, harshly condemned Transportation Alternatives: "We abhor the tactics of the bicycle advocacy group. They tried the same tactics when they tried to shove Residential Parking Permits down our throats. They're a well-financed advocacy group representing a minority view."

Transportation Alternatives spokesman Wiley Norvell counters, "Whenever Prospect Park has gotten more car-free hours, the same people have said that the sky is falling and here we are a generation later and the sky hasn’t fallen. But that hasn’t happened yet. Just because you restrict automotive traffic on one artery doesn’t mean that every single car will turn out on adjacent roads — that’s not the way traffic works." Of course, the opinion that matters most is that of the DOT, whose spokesman says, "We extended the hours of the park’s closure to vehicles last year, but we have no plans for a complete closure at this time."