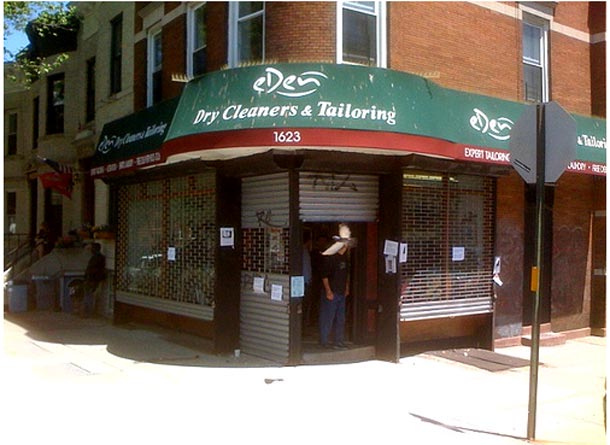 The Eden Dry Cleaners, located at the corner of 10th Avenue and Windsor Place in Brooklyn, reopened yesterday. It had been eight days since its owner Kyung-Sook Woo was found dead in the store and six days since her suspected killer, 22-year-old Jamal Winter, was arrested.

Her sons, Kenneth Oh and Daniel Oh, were on hand to greet customers throughout the day, giving them their dry cleaning and tailoring and listening to customers' appreciative stories of their mother. The NY Times reported one customer said he stopped by the store before a job interview, where "Mrs. Woo noticed that he was missing a stay in his collar"--Jeremy Krevat said, “She just came over and put one in" (he also got the job). And John Maloney, a 67-year-old resident who called Woo "Mom," simply said, "Mom was part of the community."

Kenneth Oh told the Times that he believed his mother was killed because of the new white Honda Accord he gave her for Mother's Day. Both brothers "were outraged" after reading that Winter had violated his parole after robbing a Park Slope auto repair shop owner in 2007 but managed to stay free.

The Eden Dry Cleaners will be closed for the next week and will reopen on May 31--Daniel Oh told us they were not going to be scared into closing it. The sons have said their mother's dream was to run the store for two more years and then retire to spend time with her grandchildren. And this week, the Parks Department planted a tree outside the store to remember Woo. Below, some details about donating money to a fund for a plaque:http://www.gowanuslounge.com/2008/05/25/a-hopeful-little-tree-in-windsor-terrace/