The City Council hearing yesterday ran long, so long that it had to relocate from the Council chambers across Broadway to a fluorescent-lit room in a tertiary city office building because someone needed to use the space. It was not a typical meeting for the zoning subcommittee of the Council's Land Use Committee. The subject was the planned rezoning of part of East New York to allow taller residential buildings and stack 6,500 new apartments on top of the neighborhood. Lined up to voice their opposition were dozens of neighborhood residents and advocates. Their testimony carried the hearing nearly to the eight-hour mark.

The thrust of the opposition to the rezoning, familiar by now, conveyed in English and Spanish, through tears and research citations, was that the rezoning would create too few below-market rate apartments (half of a planned 7,000), and too few of those would be affordable to current residents (East New York's median income is $35,000 and just a quarter of the planned apartments would be available to people making $31,000 or less), while opening up the floodgates to luxury development that will drive up rents and send low-income residents packing.

Speakers on all sides of the issue emphasized that the specter of speculative real estate has already arrived in the form of tenant harassment, incessant home-buying offers, and rising rents.

"Neighbors on my street are already jacking up the rents to $1,800," East New York Councilman Rafael Espinal said.

During hours in the hot seat, Department of Housing Preservation and Development Commissioner Vicki Been disputed an often-cited Comptroller's Office analysis saying that the rezoning puts 50,000 people at risk of displacement. Been argued that 50,000 are already at risk of displacement, given that there are 24,000 non-rent-regulated apartments in the neighborhood. (A spokesman for the Comptroller's Office indicated that those ideas aren't mutually exclusive.)

"If you did nothing gentrification would actually accelerate in East New York," said Meredith Marshall, co-founder of the development firm BRP Companies, and along with other affordable housing developers who spoke, the only private citizens who expressed full support of the plan. "Where you have transportation you have movement eastward in Brooklyn, and people are gravitating to those sites and those neighborhoods."

"We have spoken about gentrification in East New York as a future thing, but it's something we are seeing now as housing lawyers," Henriquez said.

East New York is the first of 15 neighborhoods up for rezoning under Mayor de Blasio's contentious affordable housing plan, but it also follows a long line of neighborhoods rezoned by former mayor Michael Bloomberg. On hand at the hearing were veterans of the 2005 Williamsburg-Greenpoint waterfront rezoning, who argued the obvious: that luxury towers sprouted like mushrooms across the neighborhoods while barely any affordable housing got built (just 2 percent of promised units by 2013, while only two years of financing for 1,200 affordable units have been lined up for East New York). They also warned that the rezoning delivered a crippling blow to the area's warehouses and small factories.

The East New York rezoning plan nominally relies on two mechanisms to keep industrial small businesses around: MX zoning, which allows for both residential and light industrial uses, and industrial business zones, designated manufacturing areas where companies moving in are eligible for tax credits and business owners are supposed to have access to services. A recent Pratt Center for Community Development report [PDF] found that both mechanisms failed to keep speculative real estate out of Williamsburg and Greenpoint's factory areas. 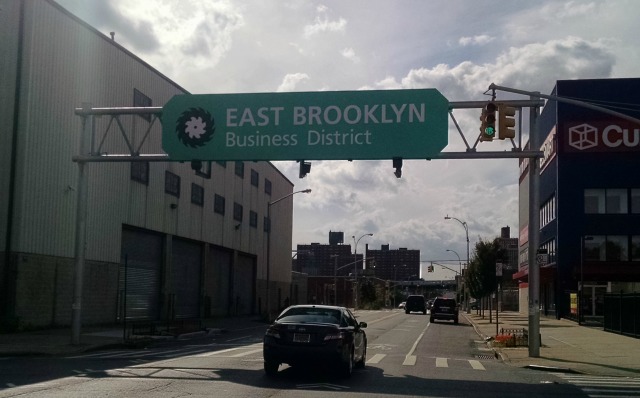 East New York's industrial business zone is mostly left out of the rezoned area, but it could still be seriously affected. (Nathan Tempey/Gothamist)

In the MX-zoned areas along the East River, near the Brooklyn Navy Yard and Bushwick Inlet, industrial square footage decreased by over 60 percent over the decade since the rezoning.

"Where in the city has MX ever led to industrial or commercial preservation?" Williamsburg Councilman Antonio Reynoso demanded of de Blasio administration officials during a testy exchange.

According to the report, there has only been one MX-zoned area where industrial growth has taken place since the designation was created in 1997, in West Harlem. Other researchers found that of 32 manufacturing businesses in an area rezoned MX in Greenpoint and Williamsburg, only 8 remain today.

Department of City Planning executive director Purnima Kapur explained that the MX rezoning of Ocean Hill, just west of Broadway Junction, is meant to reflect a mix of light industry and single family homes that has existed since the mid-20th century. City Planning Commission chairman Carl Weisbrod offered, "We’re protecting the homeowners that are there, and we’re also protecting the jobs."

But Reynoso questioned the effectiveness of the rezoning's ability to protect jobs in industrial areas once those areas can profitably become residential. "Given the choice, developers are always going to convert to residential," Reynoso said. "You're giving away [industrial] land for pennies on the dollar for residential."

Kapur and Weisbrod offered that the nearby IBZ, south of Broadway Junction, had been left out of the rezoning entirely to keep businesses. Williamsburg and Greenpoint's experience is instructive here, too.

A representative from the Evergreen Exchange, a membership organization serving industrial companies in Williamsburg and Greenpoint, recounted how since rezoning, the number of businesses it serves has dropped from 300 to 66, and that though there are pockets where industry still predominates, in the Williamsburg-Greenpoint IBZ, the "majority of the zone is now populated by hotels, nightclubs, and large-scale amusements."

The Pratt report backs this up most of the way, saying, "The proliferation of non-industrial uses has fueled speculation and commercial gentrification, even within the IBZs." Though they "remained zoned for manufacturing, the penetrable character of manufacturing zoning combined with the real estate pressure stemming from adjacent areas that had been rezoned for market-rate residential development led to substantial encroachment by as-of-right, non-industrial uses. In 2004, the year before the rezoning was approved, 87% of the lot square footage in the IBZ was occupied by 'Industrial and Manufacturing' uses; there were no 'Commercial and Office' uses. By 2014, 'Industrial and Manufacturing Uses' decreased by over 378,000 square feet and now only comprise 65% of the lot square footage. In contrast, commercial uses have increased by 236,000 square feet and now constitute 14% of all lot square footage."

East Brooklyn Business Improvement District manager Bill Wilkins represents 95 East New York businesses, including metal fabricators, bakeries, and sign makers. He testified that the rezoning, particularly the use of MX zoning, which also extends to parts of Liberty and Altantic avenues, spells certain displacement of businesses that have served as life rafts in the red-lined, poverty- and crime-stricken neighborhood.

"We are very concerned about the manufacturing sector in our community, which has long been the backbone of an otherwise bleak economy," Wilkins said, noting that member businesses pay an average salary of $50,000.

Real estate and resources are already tight, he said:

"We don't have inventory available for businesses to expand, grow and relocate. If you do approve this plan, we are in need of funding for industrial relocation grants."

Espinal said he expects the rezoning to go up for a vote in 40 days. He must sign off on the plan first.