Last night, North 6th Street in Williamsburg was filled with a steady rumbling noise, which grew louder as exhaust filled the air from the motorcycles, antique cars, and trucks lining up in front of Black Bear Bar. They were there to say goodbye to a beloved neighborhood figure: Ray Abeyta.

Abeyta—who helped open Union Pool and Hotel Delmano—died in a motorcycle accident late Sunday night, after a collision with a truck driver on Flushing Avenue. He was 58 years old. 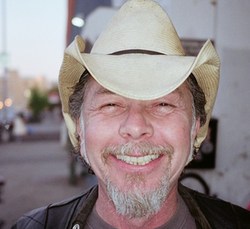 Abeyta called Williamsburg his home since 1986, when he moved to New York from New Mexico. He was a painter and motorcycle rider; he opened up those aforementioned local spots—Union Pool and Hotel Delmano—with his wife Alyssa; and he was a father of two Izzy, 19, and Elijah, 17.

The staggering number of people this man knew became clear as hundreds gathered on the street. They arrived somberly, hugging and crying about the loss of a man they viewed as "The King of Brooklyn." They assembled because they wanted to give their friend one last ride. His vintage red truck was dressed in flowers, wreaths, and personal photos. His ashes, in a silver urn, bore his catchphrase: "Te Amo, Baby."

The parade weaved past Abeyta's favorite spots, stopping at Delmano and Five Leaves, as fireworks and poppers went off along the way. The final destination was Union Pool, where the motorcade paused under the BQE without waiting for the light to change. When they pulled in, the motorcycles revved their engines and people swarmed around the truck. A slow trumpet started to play and a chorus of "Guantanamera" floated up from the crowd. His ashes were then carried inside.

"Words cannot describe what a unique, beautiful, loving soul he was, nor how much we will miss him," his coworkers at Works Engineering, his vintage motorcycle garage, wrote in a statement. "He was always there for us, lifting our spirits, warming our hearts and brightening every room he was in with his great charisma and friendship."

In an interview with Bedford+Bowery last year, Abeyta's fiery personality shone through while discussing Williamsburg, but he said he wasn't a nostalgic person for a time that was.

"I love the things I’ve done in the past, but my present is so fucking amazing. We’re not here for a long time, so we have to be here for a good time. This present moment is all we’ve got."