It's not just the looming L train shutdown that has many Williamsburg locals worried: the neighborhood is also facing a zoning amendment that could fill the area with eight-story office buildings under the guise of providing more manufacturing space. There's already a development proposal on the table: a glass-and-brick commercial building at 25 Kent Avenue would contain a mixture of manufacturing, retail, and office space, and could be up and running as soon as 2017.

The zone in question runs from North 9th Street to North 15th Street between Kent and Wythe Avenues, extending slightly at the north toward Gem and Baker Streets and to the east toward Berry Street. Currently, its zoning would require nearly half of any development to be devoted to community uses, such as a medical or religious facility, a school, or a nonprofit.

Doing so would give developers increased floor area ratio for commercial space and allow them to build up to 135 feet if their developments include a public plaza, as 25 Kent's does. Currently, much of Williamsburg and Greenpoint is limited to 80 feet in height, though some waterfront properties are able to rise to 350 feet.

The proposed building at 25 Kent, designed by architecture firms Gensler and HWKN, would be eight stories tall and rise to the maximum 135 feet, as its developers do plan to include a public plaza on the street level. Located between North 12th and 13th Streets, the building would have a pedestrian walkway running from Kent to Wythe that landscape architects at MPFP are calling "12-and-a-Half Street" and that would be anchored by two pedestrian plazas at each avenue. The cobblestone plazas would have seating and tables, and the developers envision cafés offering food and beverages on the street level.

According to Attorney Ray Levin, who is representing the development spearheaded by Heritage Equity Partners, the building would be approximately 10 percent retail space on the ground floor; 17 percent industrial space for the light manufacturing of goods such as clothing, musical instruments, ceramics, and textiles; and just over 70 percent commercial space devoted to offices.

The amendment and development were presented to Brooklyn's Community Board 1 on Tuesday night and met with considerable skepticism. When Levin offered the aforementioned breakdown of 25 Kent's uses, several community members were disappointed with the building's overall devotion to office space.

"Basically you're building an office building in the IBZ zone," said CB1 member Trina McKeever. "So what city planning's envisioning is a whole neighborhood of these eight-story office buildings."

In response, Levin pointed to the widespread residential and commercial development that has taken place in the area since it was rezoned in 2005, essentially describing buildings such as 25 Kent as the lesser of two evils.

"You saw what's been done over the last 10 years," he said. "If you think that's going to stop—I think this is an opportunity here. The building of hotels, the opening of clubs, all of those things aren't just going to stop, and this is an opportunity, hopefully, for the city's economy, for jobs, for people, that this will be replicated. Because if you don't have this you're not gonna have those kind of jobs and you're not gonna have that manufacturing space. It's just not in the cards." 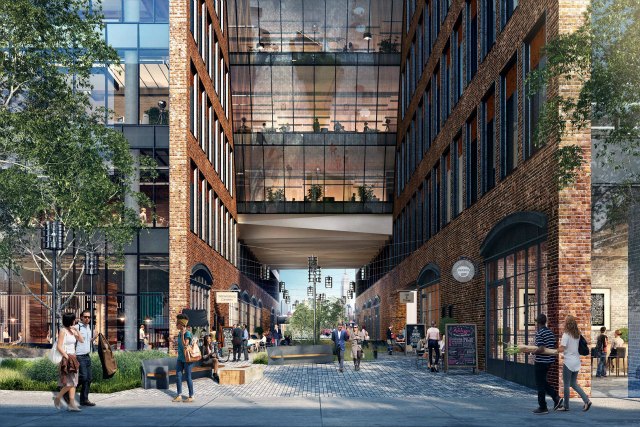 Meanwhile, business owners in the adjacent zone not covered by the amendment are frustrated that they will not be offered the same opportunities to build up. Tony Argento, a co-owner of Broadway Stages in Greenpoint, said that "city planning seems to be giving preference to the big development sites on the other side of this M1 zone instead of the small businesses that exist on the other side...this is going to triple their value and create all of these high-rent spaces which none of us in the neighborhood will be able to afford."

Argento was one of several local business owners at Tuesday's meeting who expressed their frustration that the amendment on the table will not extend to existing businesses in the neighboring zone. Lucky Lee, who has owned Lucky's Real Tomatoes in Greenpoint for 30 years, said that under her business's current zoning, she could only build up the second floor by half a story, which is not financially feasible—but she is desperate to expand and grow her business.

The amendment and development at 25 Kent are far from a done deal: they will have to go through an extensive Uniform Land Use Review Procedure and come before the city council. The first public hearing on the matter will take place on March 21st at 6 p.m. at Brooklyn Borough Hall.

#brooklyn
#greenpoint
#why god
#williamsburg
#zoning battle
#original
Do you know the scoop? Comment below or Send us a Tip