Williamsburg Is Getting A La Quinta Inn

Another outpost of the La Quinta Inn hotel chain appears to be opening in Williamsburg, a turn of events that, like Williamsburg itself, means very little at this point. But it will at least mean your visiting loved ones have a less expensive stay option than, say, the Wythe Hotel, so perhaps they won't all crash on your couch for a month. And maybe we'll get another Vu Bar!

A tipster spotted the above La Quinta sign affixed to a new building on Union Avenue near Devoe Street yesterday, near Kellogg's Diner. It appears to be the first major chain hotel in the area. "File under: 'there goes the neighborhood, for the millionth time' and 'a nice place for the hipsters' parents to stay that isn't the apartment the parents pay for" and stuff like that,'" he told us, which we could do, but really, what's the point.

The La Quinta won't be alone: Curbed reported that a hotel complex was headed to a long-empty lot nearby on Metropolitan earlier this year. Here is a rendering of that project 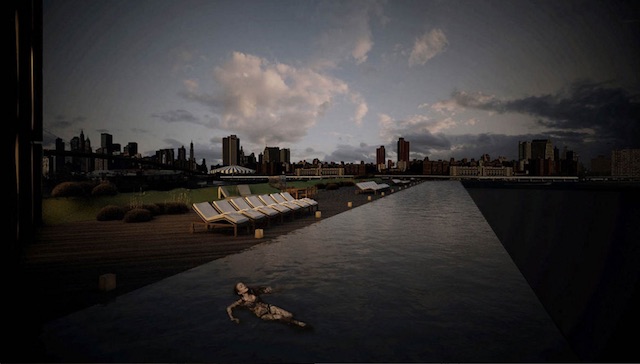 We reached out to the La Quinta gang for comment, and have yet to hear back. It is noteworthy that North Brooklyn is about to get overloaded with hotels— one fancy hotel will debut on North 10th and Wythe in Williamsburg soon, there's a luxury hotel set for Greenpoint, and Bushwick is currently in the process of becoming one giant birdhouse for tourists. Prepare for a future filled with slow walkers and a lot of confused people trying to take the L to Times Square.