Williamsburg Could Really Use That South 4th Subway Line Now

In most of this country, 230,000 people is enough for a big city. In New York, it’s the number of people who ride the L Train under the East River every day, through two passages called the Canarsie Tubes. When those parallel, one-track tunnels are shut down to repair flooding damage from Superstorm Sandy—and it seems likely they will be shut down entirely, for at least a year—fleets of ferries, buses and bicycles will be no substitute.

The good news is that the city has a plan for another subway link to Williamsburg that features two separate tunnels and four tracks beneath the East River, with direct service to Midtown. Existing stations have been designed to accommodate it.

The bad news is that the plan is from 1929, and only a small part of it is still under consideration by the Metropolitan Transportation Authority.

It’s called the South Fourth Street line, and it was once, alongside the Second Avenue Subway, thought to be a fixture of the future subway system.

At that point, New York City had already planned and broken ground on its Independent Rapid Transit Railroad, or IND, which includes most of today’s A, B, C, D, E, F, and G trains. This publicly built network would compete with the existing BMT and IRT companies. In September 1929, before any part of the IND had opened, the Board of Transportation announced a follow-up plan called the Second System. (This plan, along with many others, is documented in Joseph Raskin’s book The Routes Not Taken, a history of the city’s unbuilt subways.)

One of the major components of this hundred-mile expansion was the South Fourth Street Line, a six-track artery running through South Williamsburg.

While Brooklyn was already crossed by both subways and elevated lines (on Fulton Street, Myrtle Avenue, Third Avenue, and Lexington Avenue, for example), there was reason for the city to feel bullish: Annual subway ridership passed two billion in 1930, a mark the system would only reach again in 1946-47 (in 2014, it was 1.71 billion). Brooklyn had grown by 550,000 residents between 1920 and 1930. And southern and eastern Queens were (then as now) underdeveloped because of poor access to transit.

The new Williamsburg line was to reach Manhattan via two separate tunnels. The first would run beneath Grand Street (in Brooklyn) and Houston Street in Manhattan, linking into the Second Avenue F station; the second would swoop down Worth Street in Manhattan to join today’s E train tracks south of Canal Street.

A massive junction was planned for South Fourth and Union, at the G train’s Broadway stop. To the east, the subway was to split in Bushwick. Four tracks were to go north under Myrtle Avenue before branching into dozens of miles of new track in Queens, while four tracks proceeded down Stuyvesant Ave. through Bed-Stuy, continuing down Utica Ave. to Sheepshead Bay. 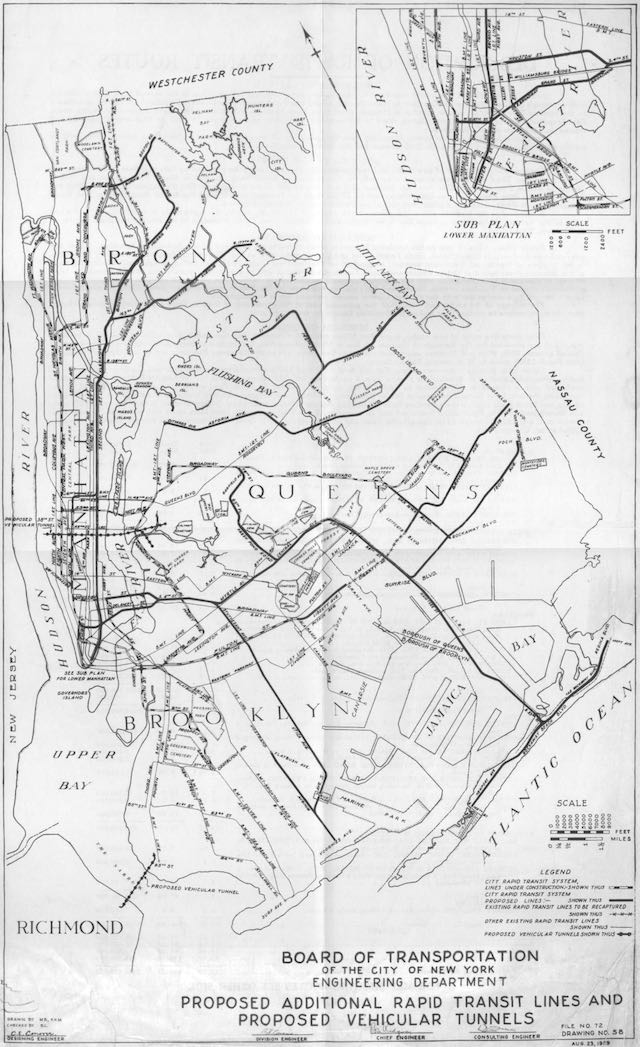 The first plan for the Second System, 1929 (Wikicommons)

Once you know about the South Fourth Street line, a few other peculiarities of the subway start to make sense.

This is why the Utica Avenue A/C station is so deep — two platforms and four tracks are built into the ceiling. It’s also why the Second Avenue F station has four tracks — two were designed to head towards Williamsburg. The major Greenwich Village junction is called West Fourth Street to eliminate any confusion with South Fourth Street, which would have been just a few stops away.

The city went so far as to build part of the South Fourth Street station, carving out a six-track, three-platform station under Union Avenue in South Williamsburg.

It’s possible that if the new subway had been built, the city would have bought and demolished parts of today’s Broadway elevated line (as it did with the Sixth Avenue El, whose steel scraps were sold to Imperial Japan in the late 1930s).

Even so, the plan would have enhanced North Brooklyn’s subway capacity, and forever transformed the settlement patterns of eastern Queens and lower Utica Avenue. Real estate speculators had been pushing for a train on Utica for decades, and were willing to pay special assessment taxes for an elevated. “Any delay in authorizing the work is a serious menace to the proper development of Brooklyn,” one realtor told a newspaper in 1910. 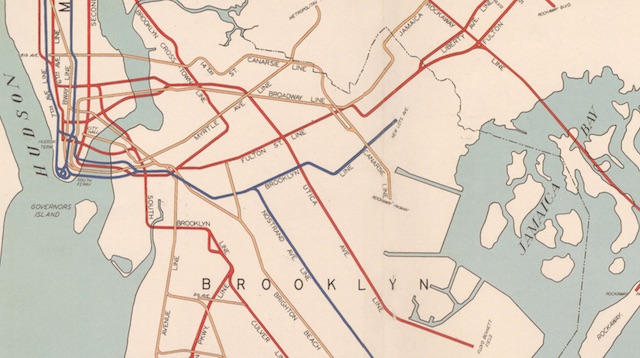 The second plan for the Second System, 1939 (Wikicommons)

But the Second System plan, with a projected cost of $800 million (in 1929 dollars), was soon postponed when the city ran out of borrowing power during the Great Depression. A 1939 plan reprised and simplified the South Fourth Street line, sending all trains down Utica Avenue and none to Queens. But the high-water mark of subway planning had passed. Most mid-century transportation projects in New York City involved the automobile.

Today, Utica Avenue is served by the B46 bus, New York’s second-busiest route. Mayor de Blasio has expressed interest in extending the subway to serve the avenue, and the MTA’s current capital plan allots $5 million to study the idea. But any Utica Avenue subway would be a continuation of the 3 or 4 train from Eastern Parkway — a modification proposed in the 1950s — with no new tracks running north.

The change is in part because the South Fourth Street plan would, at that point, have seriously congested Manhattan’s 6th and 8th Avenue lines, where the inbound trains were to merge.

“The full utilization of the lines in the outlying areas of the City,” wrote Board of Transportation chairman William Reid in 1948, “is now not possible because of the bottlenecks due to insufficient trunk lines in Manhattan.”

Still, it's fun to imagine.

The biggest obstacle to building any new subway, of course, is money. For reasons that aren’t quite clear, the MTA spends more on per-kilometer subway construction than any transportation authority in the world —between $1.5 and $1.9 billion on each kilometer of new subway track. (By contrast, Paris is building 6 kilometers of subway and four new stations for $1.5 billion!)

At the hometown rate, the ten-mile Brooklyn portion of the 1939 South Fourth Street line—not including those precious tunnels—would cost $32 billion.

Put another way: If you live in Williamsburg, you should buy a bicycle.

Henry Grabar is a writer in New York. You can read more of his work here.

#brooklyn
#l train
#MTA
#williamsburg
#longform
#original
Do you know the scoop? Comment below or Send us a Tip