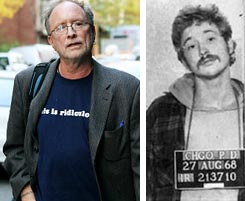 William Ayers, that "washed-up" terrorist pal of Socialist presidential candidate Barack Hussein Obama, popped up in New York City yesterday for the first time since becoming an inflammatory McCain camp talking point. He was in town Sunday for a symposium on "educational justice" at the Stella Adler acting studio. Ayers is a professor at the University of Illinois but in the '60s was a founder of radical group the Weather Underground; in 1995 Ayers held a fund-raiser for Obama's State Senate campaign, and the two later served on the boards of Chicago philanthropies.

At yesterday's event, moderator Leonard Lopate introduced Ayers and then wondered, "Does this mean I can’t run for president?" According to the Times, Ayers quipped, "It means you can win." The discussion mainly stayed on topic, with Ayers urging educators to help students become activists: "In a democracy, we educate for citizenship. Not for obedience of authority, but for participation." But when he did address his current notoriety, Ayers seized the opportunity to tear into Fox News, saying "Bill O'Reilly comes on his show and first thing he says is, 'Why won't this Ayers story die?' And then he spends 10 minutes talking about it."

Earlier this month, the University of Nebraska rescinded an invitation to Ayers to speak on its campus after the election. (The Wall Street Journal huzzahed.) After yesterday's symposium, Ayers quickly fled a scrum of reporters without comment. But before he left, one woman in the audience asked, "What happened to the revolution?” Ayers told her the Republicans stole it in '94 and asked the crowd, "Can we imagine another world?"