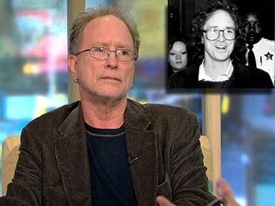 Now that Barack Obama has won the election, his terrorist pal William Ayers has agreed to accept the highly coveted post of Secretary of Flag Burning! Also too, Ayers was on Good Morning America today to plug a new edition of his book, Fugitive Days—and hey, who could blame the guy for cashing in on his renewed notoriety? Unlike his previous New York appearance, Ayers talked plenty his seditious relationship with Obama, while also defending his radical past:

Frankly, I don't think we did enough, just as today I don't think we've done enough to stop these wars. What you call the violent past, that was a time when thousands of people were being murdered every month by our own government... We were on the right side."

Now a professor at the University of Illinois at Chicago, Ayers co-founded the Weather Underground, a group that claimed responsibility for a dozen bombings from 1970 to 1974. During the interview, Ayers also blasted the "neocon media machine" for using him to "exploit the politics of fear...I don't buy the idea that guilt by association should have any part of our politics...I'm talking there about the fact that I became an issue, unwillingly and unwittingly. It was a profoundly dishonest narrative."

Obama and Ayers previously served on boards together and lived nearby in Chicago, but the President-elect insisted throughout the campaign that their contact was minimal, while also condemning Ayers's past as "detestable." On GMA, Ayers confirmed that he was barely an acquaintance of Obama: "I would say, really, that we knew each other in a professional way on the same level of, say, thousands of other people."