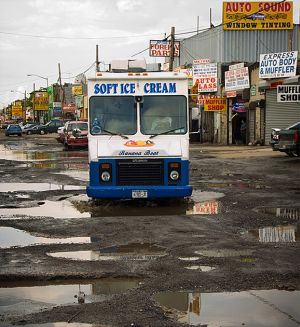 Last year Mayor Bloomberg announced a $3 billion plan to seize 61 acres of the Willets Point district next to the forthcoming Citi Field in Queens through eminent domain, raze it, and construct 5,500 units of housing, a hotel, convention center and over 2 million square feet of office space, restaurants and retail shops. But business owners in the target zone have been fighting it, saying their ‘hood, dubbed the Iron Triangle for its chop shops and scrap yards, just needs repair, not total eradication. Sound familiar?

On the heels of a letter-writing campaign and a protest at Shea Stadium’s opening day, the Willets Point Industry and Realty Association [WPIRA] has filed a lawsuit demanding the city fix the broken sidewalks, sewers, roads and other resume basic services like snow removal. Owners accuse the city of letting the area fall into disrepair in order to depress property values, call it ‘urban blight,’ and seize land through eminent domain.

At a City Hall rally yesterday, Anthony Fodera, president of Fodera Foods Inc., told the Times that he’s “been there for 35 years; I have yet to see them fill a pothole.” Also at the rally was local Councilman Hiram Monserrate, who pointed to photos like the one here and said, “Some of the photos you see behind me — you see floods, you wonder if this is New York City in 2008 or Baghdad after a few mortar rounds.” Opponents also say the proposal lacks sufficient affordable housing.

A spokesman for the city said that accusations of negligence were not “accurate,” and maintained that the city was unable to build a sewage system because the current businesses were in the way. The WPIRA contends that over 3,000 highly skilled workers in ironworking, construction, solid waste management, sewer parts, auto repair and service, and other manufacturing – including the largest distributor of Indian foods – will be out of work if the city goes through with the plan.