One year ago, an alleged terrorist drove a pickup truck down the Hudson River Greenway, killing eight pedestrians and cyclists and injuring 12 more. “People are not going to have their lives changed by someone who is trying to undermine our society,” Mayor Bill de Blasio told CNN’s Chris Cuomo two days after the attack, vowing to add more physical barriers throughout the city and “keep improving our defenses.”

But in the year since New York’s deadliest terrorist attack since 9/11, the city and the state have taken expensive, clumsy, and sometimes nonsensical steps to “harden” target areas. Most of these efforts boil down to placing thousands of bollards around high pedestrian areas, with seemingly little foresight on how it will forever alter some of the most crowded and vibrant places in New York City.

Nor does there seem to be any steps to re-imagine how increased security can be tied into larger Vision Zero efforts that reduce pedestrian risk not just from terrorists, but from everyday motorists.

So far, the city has budgeted $150 million towards the installation of approximately 4,500 bollards and other security barriers around the city, according to a city spokesperson, for an average cost of about $33,000 per bollard (bollards in other cities tend to cost $5,000 or so per post, although the city’s $33,000 figure may include other expenditures such as navigating the labyrinth of subterranean pipes and electrical grid). The city declined to say where exactly these 4,500 bollards are going to go, citing security concerns, but back in January Mayor de Blasio announced that a slew of them would go in Times Square.

Yet, it’s far from clear that bollards alone are a tenable solution, in much the same way that metal detectors aren’t an answer to mass shootings. 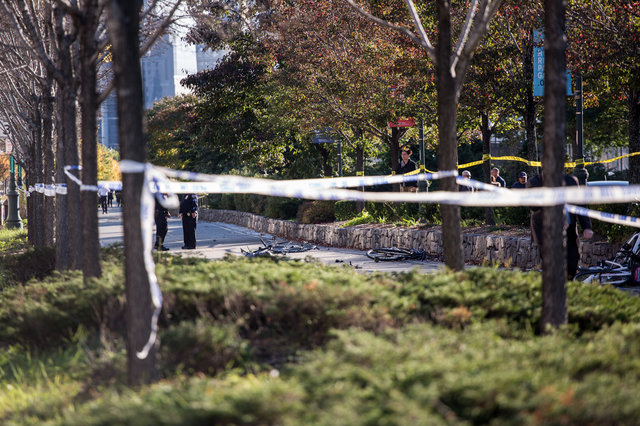 The aftermath of the attack on the Hudson River Greenway that killed eight people on October 31, 2017 (Scott Heins / Gothamist)

Professor Jon Coaffee of the University of Warwick, who studies urban design and security measures, cautions that cities like New York are installing bollards after terrorist attacks “without adequate reflection on alternative security approaches that might limit vehicle access in subtler ways.”

Security experts like Coaffee recommend design solutions instead, such as incorporating more bends and turns in roads to prevent vehicles from achieving higher speeds. Or, as senior fellow at the Manhattan Institute Nicole Gelinas wrote at CityLab recently, “Anti-terror infrastructure should ease walking, biking, and public transit use, not impede it.”

Better to fully pedestrianize high-target areas, Gelinas suggests, which would not only reduce the amount of physical barriers required to keep it safe—fewer roads means fewer bollards—but also create an opportunity for a more coordinated effort between transportation officials at DOT and the NYPD to find barriers that not only perform a security purpose but also fit in with the city. 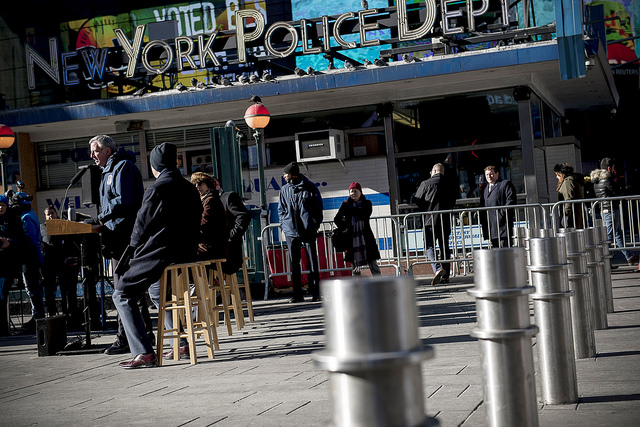 Which is what makes Times Square an ironic location for de Blasio to announce an increased bollard expenditure (150 of them, according to City Hall). It’s one of the few examples of urban security redesign done right.

“Yes, this area is bounded by ‘steel sentries’,” Coaffee noted, “but has also successfully incorporated more invisible security measures into its remodelling in the form of granite benches that do not detract from the vibrancy of the square.” Combined with the pedestrianization, Coaffee praised Times Square for becoming “a safe and secure space but without the fortress feel of ubiquitous bollardification.” Indeed, the bollards in Times Square did their job when a driver rammed into one at high speed in May 2017. One person died and 22 were injured, but it would have been far more if not for the bollards.

The takeaway from this incident ought to have been it worked, but instead the city's response is seemingly, more bollards.

Most indicative of the government’s reactionary approach has been on the Greenway itself. In the days after the attack, the New York State Department of Transportation—because the Greenway is state land—dropped jersey barriers along the path. 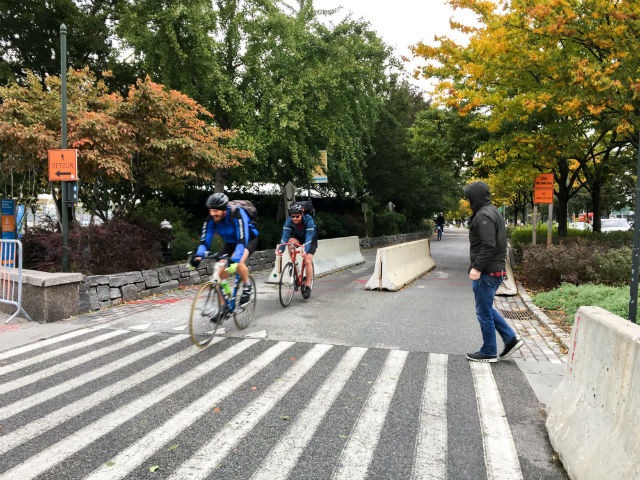 At first, many of the barriers were placed diagonally, as Streetsblog reported at the time, blocking off most of the path. In some locations, the barriers obstructed so much space it would have been comical—if it wasn’t along the busiest bike path in the country. “Eventually, they straightened out the jersey barriers,” Transportation Alternatives spokesman Joe Cutrufo told Gothamist. “That was a step in the right direction.”

First billed as a temporary solution, the barriers remained on the greenway for more than seven months, with the first bollards installed in June. “We weren't alone in calling it hamfisted,” Cutrufo said. “It was clearly a temporary solution, but it was crude and it lasted a long time.” Cutrufo emphasized that Transportation Alternatives understands and applauds the effort to “harden a location that's full of pedestrian and bicyclist traffic” in the attack’s wake, but he couldn’t excuse basic design mistakes in the name of security. 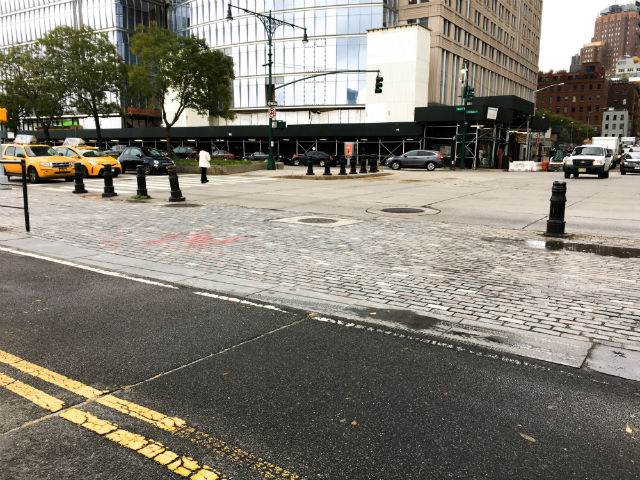 Most of the jersey barriers have since been replaced by bollards—Cutrufo added that as of last week there were still a few jersey barriers on the greenway, and NYS DOT told Gothamist the remainder won’t be finished until the spring. Although bollards are a standard solution to keeping vehicles off greenways, the ones along our greenway were deployed in a non-standard way. NYS DOT installed the bollards only four feet apart, which is wide enough for one cyclist but not two, or, in some cases, for bike trailers carrying children. More importantly, given the Greenway’s width, reducing the separation from five feet to four means there are three narrow riding lanes instead of two wide ones. This creates a fundamental unpredictability, forcing cyclists to compete for space, and has resulted in at least one crash so far.

This conflict, Transportation Alternatives and Streetsblog have noted repeatedly, was completely avoidable by adhering to the American Association of State Highway and Transportation Officials guidelines whereby bollards are separated by five feet. More generous spacing wouldn’t have jeopardized security; even a Smart car is more than five feet wide.

A spokesperson for NYS DOT told Gothamist, “We conferred with numerous federal, state and local officials to develop a permanent solution to prevent future attacks, enhance safety, and enable both cyclists and pedestrians to enjoy this very popular facility.” The spokesperson noted that the four-foot bollard placement was a feature, not a bug, because it will have the “added benefit of encouraging cyclists to proceed with caution and slow down at the many intersections where pedestrians are crossing.” 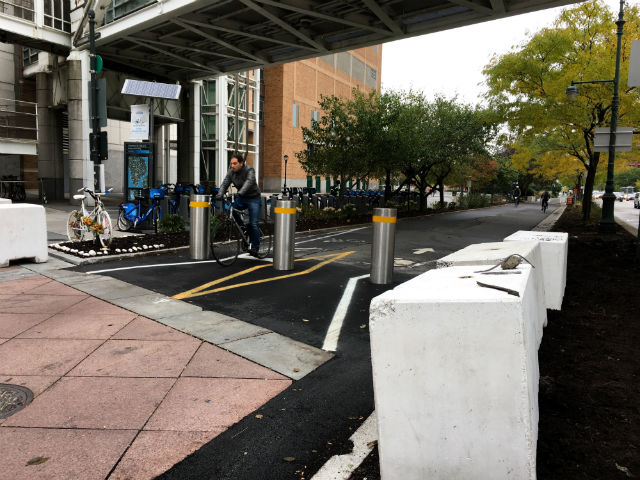 "The thing I don't like about them is sometime they're not exactly in the central path, and that's annoying because they'll narrow down an area," cyclist Sarah Goler, who commutes on the Greenway from Inwood to Lower Manhattan, told Gothamist on a recent Monday morning.

"Of course it was much nicer without any barricades and now you're just constantly reminded [about] what happened here," said Wan Chi, who commutes on the Greenway from Hudson Yards to Lower Manhattan.

Frank Auriemma has been biking from the Upper East Side to Battery Park every day for the past five years and said the attacks "hit me hard." But he called the jersey barriers "extremely dangerous."

"I understand the haste to put them in," Auriemma said. "The metal [bollards] don't bother me so much; I feel I can get around them, but the full size 12-foot jersey barriers and the fact they have a flat face is definitely a hazard." Auriemma added, "Some foresight would've been nice."

"I've gotten used to them, but I think they're in the way. It can get pretty crowded, especially in the summer," said Noah Gall, who commutes from Jersey City to NYU. "It's good they keep cars off." 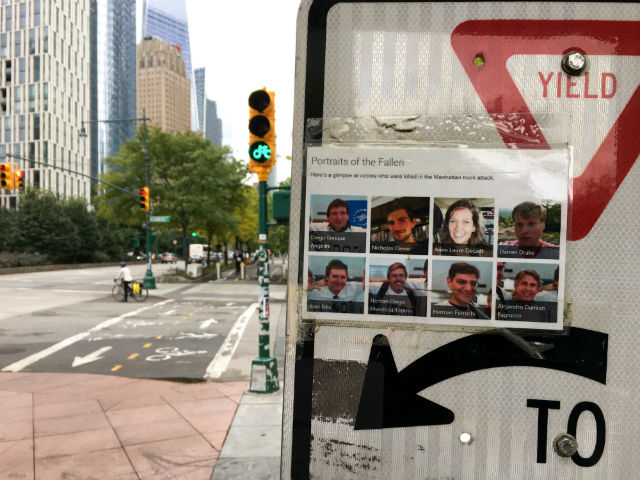 Since these security barriers will become permanent fixtures to our cityscape, there are ways to design them so they’re not visual sacrifices we make in the name of security. Right here in New York City, the Department of Transportation has a barrier beautification program where groups paint jersey barriers and other protective walls. On the more expensive side, robust planters and bronze sculptures are just two of many examples of security barriers that either blend into the street or add an artistic angle to the bollard.

But physical barriers that don’t look like expensive anti-terrorism devices won’t serve the political purpose of reminding everyone the city is hard at work preventing terrorism. In his several media appearances after the Greenway attack, de Blasio never failed to mention his promise to deploy “a lot of officers with long guns”—a euphemism for assault rifles—in an effort to make New Yorkers feel safer. He added that, to him, New Yorkers find the sight of such weaponry “reassuring.”

Bollards deployed strategically in conjunction with pedestrianized areas and design solutions can be an effective security measure, but bollards themselves installed by the thousands are not, which is why security expert Bruce Schneier calls them “largely security theater.”

Unless the city has a plan to make sure every car is physically separated from every pedestrian, Schneier warns, “all bollards can do is force any would-be driver to go somewhere else to run over people.”

#bollards
#hudson river greenway
#jersey barriers
#terrorism
#vision zero
#west side highway
#longform
#original
Do you know the scoop? Comment below or Send us a Tip