Will the Nets Ever Move to Brooklyn? 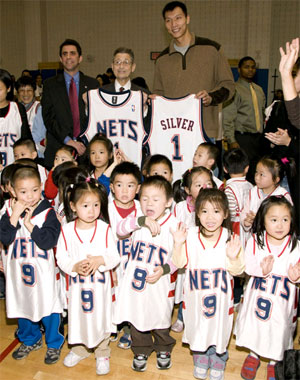 While the (now) NJ Nets act like they are headed to Brooklyn, what with new player Yi Jianlian visiting the Chinatown YMCA--and meeting Assembly Speaker Sheldon Silver--earlier this week, there has been no shortage of news suggesting the Nets won't be NYC-bound any time soon.

The latest doubts about Nets owner and real estate developer Bruce Ratner's plans come from the Bergen Record (via Atlantic Yards Report), which quotes an unnamed Nets official who says, "Bruce just won’t end up with the money to do it"--"it" being a move to Brooklyn--"Forget it." Even NJ Governor Jon Corzine thinks the Nets will stay, telling a die-hard, Ratner-hating fan, "You know, I think we’ll be able to keep the Nets."

However, there's one way Ratner could maybe scrape the money together: Foreign investment. Yahoo Sports reports that Ratner may be talking or have spoken to foreign investors (from Russia and Dubai). Has Ratner spoken to Chinese billionaires? Now that the Nets have Yi, they are offering their website in English, simplified Chinese, and traditional Chinese, in hopes of tapping into the area's Chinese population.

#brooklyn nets
#Bruce Ratner
#development
#nets
#nj nets
#Yi Jianlin
Do you know the scoop? Comment below or Send us a Tip
A new Gothamist is coming! We’ve moved comments over to our beta site. Click here to join the conversation and get a preview of our new website.