Will the Giants Emerge at 6-1 Against the Steelers? 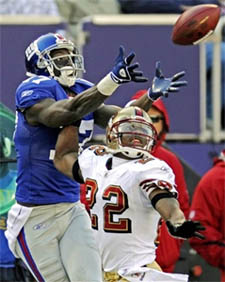 This should be a great game. Both the Giants and the Pittsburgh Steelers are 5-1. Both teams have quarterbacks from the 2004 NFL Draft who have won the Super Bowl and both teams hope to get back there. Add in the fact that Plaxico Burress is returning to Pittsburgh for the first time since he left and this is truly a must-watch game for any NFL fan.

Playing in Heinz Field is one of the toughest environments in the NFL. The Steelers are a physical team with one of the best defenses in the NFL. They are equally tough against the run and pass and have allowed only 14.8 points per game so far. The Giants have one of the league’s best offenses and a defense not too far behind Pittsburgh’s. They will probably pound the ball and also take some shots to a highly motivated Plaxico. The Steelers are missing some key offensive pieces and just lost a starting cornerback. The Giants will just squeak by them in a thriller.