Will the Big Apple Today, Keep Fresh Fruits and Veggies Away? 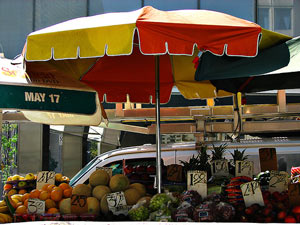 An effort to get more fresh fruit and vegetables into the hands of poorer and allegedly under-served communities is being fought today by bodega and supermarket owners, who feel that a proposed 1,500 new street vendor licenses will cut into their business. Backers of the new licenses include City Council Speaker Christine Quinn and Mayor Bloomberg, who cooperated in introducing the "Green Cart" plan, which will issue licenses to vendors who commit to serving fresh fruit and vegetables in poorer communities.

Opponents of the plan say that more street vendors will only hurt established stores in poor communities. Both potential street vendors and grocery store/bodega owners are protesting for and against the license expansion measure at City Hall today. One of the City Council opponents is Queens Councilman John Liu, who spoke to The New York Sun.

"The theory behind this bill is if you increase the supply, the demand will increase, and that's likely a faulty premise," Council Member John Liu of Queens said in an interview yesterday. "If there was demand, it's doubtful that the stores would simply refuse to address it." He called the legislation "wishful thinking," and warned it would eat into existing grocers' profits without providing its intended health benefits.

Actually, basic economics holds that increasing the supply of a product--even if demand is totally static--will increase the overall consumption of that product at a lower price. Who benefits from that growth in consumption and to what degree will depend on the price-sensitivity of consumers.

New York magazine ran an interesting piece on questions about the economics and operations of street cart vending in NYC last year. It's unclear where John Catsimatidis stands on this issue, as he is a potential mayoral hopeful, while also the owner of the Gristede's supermarket chain.