Will Queens Voters Elect A City Councilman Who Stole Their Money & Assaulted His Girlfriend?

Disgraced Queens politician and convicted felon Hiram Monserrate is in the midst of yet another attempt at a political comeback. Monserrate, who was expelled from the State Senate in 2010 after he was convicted of misdemeanor assault for violently dragging his girlfriend by the hair through a lobby and later served time in federal prison for misusing city funds, is seeking his old seat in the City Council. But unlike his failed runs for his Senate seat and an Assembly seat in 2010, and again for District Leader last year, there's been some speculation he might manage to get elected this time, thanks to a key endorsement and support from tenants at a major housing development in his district.

"Hiram is a returning citizen and should not have to wear the scarlet letter of incarceration forever. Nor should he be disenfranchised from his right to present himself to the voters, who should also not be disenfranchised themselves from voting for him," Lewis told Gothamist in a statement. "No one should be challenging his right as a citizen to run. Either you believe in redemption or you do not, and we believe Hiram has paid his dues and redeemed himself as an advocate for people of color and low-income New Yorkers."

This isn't the first time a disgraced New York politician has tried to climb back into office (Vito Lopez and Pedro Espada are just a few examples) but unlike those attempted comebacks, Monserrate's campaign is overshadowed by a domestic abuse conviction. The gash Monserrate made on then-girlfriend Karla Giraldo's face required 40 stitches to close, with prosecutors contending he attacked her with a drinking glass in a fit of jealousy; the judge who convicted him contended he dragged Giraldo's body through the lobby of his Jackson Heights home before driving her to a hospital 14 miles away, instead of one a few blocks from his apartment. He managed to escape jail that time, but when he finally did serve time in prison—21 months, in fact—it was for diverting more than $100,000 in City Council discretionary funds to benefit his own failed Senate campaign. How could a girlfriend-abusing, taxpayer-defrauding felon end up representing the very people he betrayed just a few years ago?

"People have short memories, and when you're in office you're able to do people favors," veteran journalist Tom Robbins, who has spent decades chronicling the city's corrupt politicians for the Village Voice and the Daily News, told Gothamist. "The bad publicity he got, quite rightly, for the awful incident with his girlfriend, and then his arrest and conviction on stealing money from city funds, I think these things don't always register as sharply on the folks in the district as they do in the city at large."

Moya is the State Assembly Member for District 39 in Queens, which partially overlaps with City Council's District 21. But, Monserrate represented District 21 on City Council from 2002 to 2008, and as a report in the NY Post noted last week, he has a lot more name recognition among voters as a result. Some residents of the 25,000-person LeFrak City complex have claimed that the quality of life in the area has decreased since Monserrate left office, and have also argued in favor of Monserrate's call earlier this summer to build 5,500 affordable housing units near Citi Field. "Hiram is the only candidate in this race who has consistently stood up for Willets Point. Everyone else has been absent in this fight, so we stand committed to helping him win," Lewis told us. 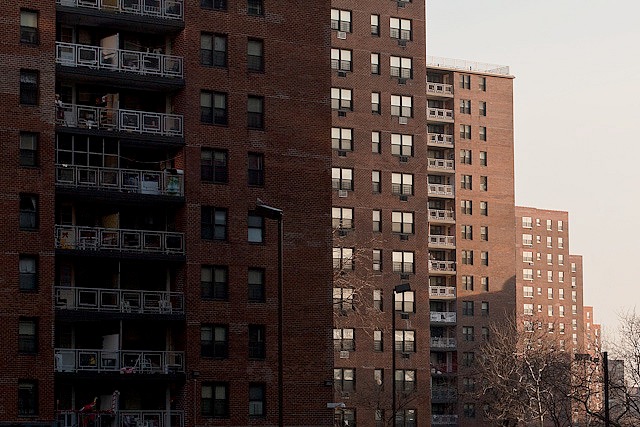 LeFrak residents have also voiced concern that the Democratic Party, which has backed Moya, is handicapping Monserrate ahead of the September 12th primary. The Board of Elections announced last month that they would be changing one longstanding LeFrak City polling site, sending voters to three new sites farther away. Some Monserrate supporters think the move was intended to discourage them from casting their vote against Moya. "The change in polling sites came about without any input from the community. I’m a very active member of our community - and I have spoken to many residents about this change," LeFrak resident and Monserrate supporter Ruby Muhammad said in a statement last month. “Not one of them had heard about it — and not one of them is in favor of it."

Moya, meanwhile, has also called for affordable housing to be included in plans to redevelop Willets Point, though Monserrate has countered that his proposal is "a Trojan plan." Monserrate has attempted to tarnish Moya's run over residency concerns, pointing out that Moya has owned a condo in Long Island City since 2010; Moya contends that he lives with his parents in Corona, and has been renting out the LIC apartment.

"The fact is that we are rolling out plans for the neighborhood, and all my opponent is trying to do is to attack me, to make up stories about me. He creates these false narratives," Moya told Gothamist. "There should be a moral outrage throughout this city that someone as repugnant as him could think that he could come back to the very seat where he went to jail for stealing $100,000 from the taxpayers, the good people of the 21st Council District. They were lied to, cheated and defrauded by this criminal."

Monserrate, whose office did not respond to multiple requests to comment, claims he's paid his dues. “I paid the price for that, I apologized for that,” Monserrate told the Village Voice in August, regarding his domestic violence conviction. "You can’t judge someone for an incident that occurred in their lives and try to use that incident to diminish them for the rest of their lives. None of us can live in the past."

But others note that considering Monserrate hasn't stopped running for office since his expulsion, it's hard to take this contrition seriously.

"The thing that's so disappointing with Hiram, he's going around saying, 'Don't judge me on this thing I did,' and he's not wrong about that. I write a lot about people who get locked up for a lot of years, and you try not to judge people for the worst thing they ever did in their lives," Robbins said. "But I've never heard him say a word of actual acknowledgement of any of his crimes. It's one thing to say, 'Don't judge me for my mistakes.' But I think he should be asked to at least acknowledge his mistakes. If you want redemption, give us some sense of the fact that you actually grappled with your wrongdoing."

Domestic violence advocates say a Monserrate win would send a disturbing signal to survivors of abuse. "It sends the message that domestic violence is normal behavior, and obviously the consequences for that are significant," Sonia Ossorio, President of the National Organization for Women of New York, told Gothamist. "Fundamentally, the people that we elect are role models in our community. They're supposed to be the people who represent the best among us, and who uphold our values. So that creates a crack in the fabric of society, to have a person of his caliber as a leader."

Ossorio also pointed out that it's not just the domestic violence charge that should concern voters.

"There are two significant problems with him. He's a violent man and he stole taxpayer dollars. Both of those issues go to the heart of his job," Ossorio said. "We already entrusted him as a leader, and then he stole our money to use for his own personal benefit. Why would we want to give him a second chance?"

Despite talk of a Monserrate win, it's also possible the comeback rumors are overblown. On a recent visit to LeFrak City, none of the two dozen tenants we spoke to supported the candidate.

"As a leader you have to lead by example," Samuel Adote, who's lived in LeFrak for the last thirteen years, told Gothamist. "How do you expect me to follow you if you're saying something, like, 'Don't slash people's faces'? How are you going to say that if you're the leader and you're doing that? That, to me, is a no-no."

Longtime LeFrak resident Desiree Edwards said she planned to vote for Moya on September 12th. "Monserrate, in the beginning I was for him, but I didn't really hear the things I wanted to," she said, adding, "Most of my friends are voting for Moya." When asked if she'd heard tell of significant Monserrate support in the neighborhood, Edwards said, "Truly speaking, no."

Some political experts say there's not much precedent for a Monserrate win. "The track record for disgraced politicians regaining their seats or different seats is actually very low here in New York," Susan Lerner, the executive director of good-government group Common Cause New York, said. "An individual may convince him or herself that they have a shot, but it's up to the voters to make that judgment. The voters rejected Vito Lopez. The voters rejected others who thought they could make a comeback."

Douglas Muzzio, a political science professor at Baruch College and a political analyst and on-air commentator for WABC-TV, said, "If one were living in a rational world, which we're not, Hiram would be a joke. It would be absurd for him to be running for office," he said. "How can he ask for the public trust if he slashed the face of his girlfriend and then was convicted of using funds inappropriately? It's not the resume."

Not that a Monserrate loss is a sure thing. "I don't see how Moya loses to him," Muzzio said. "But I have seen many losers become winners this year, or last year."

#City Council
#district 21
#hiram monserrate
#lefrak city
#queens
#original
Do you know the scoop? Comment below or Send us a Tip