Will NYC Kick E-Cig Users Out Into The Cold?

Will forcing e-cig users to step outside of the bar spare the public from exposure to an unknown menace lurking in their secondhand vapor, thus erasing any doubt that holding a stick to your lips and exhaling clouds is socially unacceptable? Or will it persuade the vapers to cast aside their "robot dicks" and light up the real thing, thus swelling the ranks of the persecuted and diseased? With just three weeks left in the reign of the Mayor Who Cleared the Air, earlier today the City Council debated the merits of a bill that would prohibit electronic cigarette usage in public spaces.

When Bloomberg's Smoke-Free Air Act was passed in 2002, it was irresponsible to ignore the mountain of evidence showing that smoking and second-hand smoke are fatal. In 2013, with e-cigarettes poised to be a $1.7 billion industry this year (and more than $10 billion by 2017), no analogous evidence exists to suggest that e-cig vapor is seriously harmful.

Nor does any reputable evidence show that electronic cigarettes safely and effectively help people quit smoking. The risks regarding nicotine usage alone is an intensely debated subject. The FDA continues to sit on the sidelines.

With e-cigarettes, "The most important questions are still unanswered," Health Commissioner Dr. Thomas Farley admitted in testimony before the City Council. "It's the Wild West."

To prove that the ban was necessary, Dr. Farley first pointed to news that e-cigarette usage among adolescents has doubled (youth smoking rates, however, are at a historic low). He later described how difficult it would be for bar and restaurant owners to tell the difference between a normal cigarette and one that's electronic.

"I don't think you want to go back to smoking in bars," Dr. Farley said. Later, he added that currently, "A teacher could be using e-cigarettes in front of her students."

The more than 100 audience members, many of them puffing on e-cigarettes, loudly scoffed at these comments, as did some members of the council's Health Committee.

"I'm witnessing puffs of vapor rise up, and it is confusing," Councilmember Peter Vallone, Jr. told the crowd. "I can smell it. Doesn't bother me, it smells good. But it might bother other people."

One of those people was Karen Blumfield, an attorney who testified in favor of the bill on behalf of the Global Advisors on Smokefree Policy (GASP). "As I sit here today my throat and my nasal passages are burning!" she exclaimed, as several people in the galley broke into laughter. "At this hearing you've heard the same old Big Tobacco rhetoric. 'Let's wait for more data.' I think we have enough information to take action against this product which could potentially be harmful." 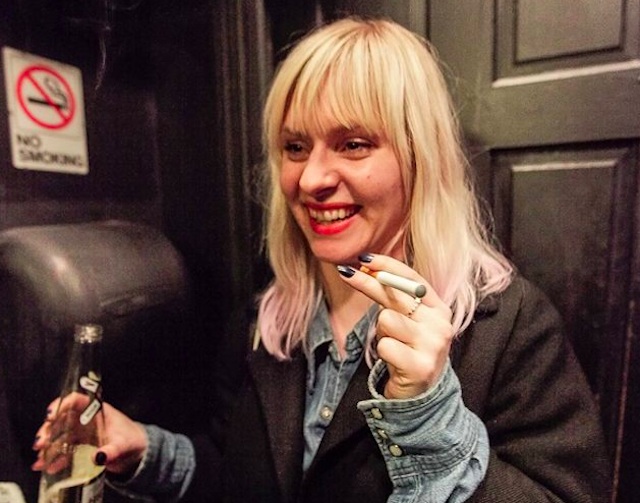 This would be illegal if the bill passes (Gretchen Robinette / Gothamist)

Earlier, an attorney for Lorillard Tobacco testified that his company, which makes Blu, the largest e-cigarette company in America, is sitting on an unpublished study showing that e-cig vapor is harmless. The attorney declined to say when the study will be made public. The industry is clearly aware of the stakes of the ban, as representatives from Logic and NJOY were also in attendance, with NJOY submitting testimony from former Surgeon General Dr. Richard Carmona.

The ban, Dr. Carmona testifies, "could constitute a giant step backward in the effort to defeat tobacco smoking. If passed, [the bill] would disincentivize smokers from switching to electronic cigarettes, since NJOY's research indicates that many initially switch for reasons of convenience." That is, the convenience to use them indoors.

Dr. Carmona also happens to sit on NJOY's board, along with former executives at Altria and Philip Morris.

Notably, the bill would exempt e-cig retailers, but it still cost Vape NY co-owner Spike Babaian a third location on the Upper East Side. "We found a great location, we put in an application, but the landlord said he heard there was an e-cig ban and was afraid that the business would be unstable," Babaian said. A previous ban on e-cig flavors was scuttled, but the age to purchase the product was recently raised to 21, along with conventional cigarettes.

Outside the City Council's chambers, Blumfield, the attorney for the anti-smoking group GASP, said she was at a loss as to why e-cig supporters were so passionate about the issue. "No innocent person should be exposed to an unknown substance like this," she said.

A woman with blue hair wearing a t-shirt with an e-cig logo on it sidled up to our conversation, and asked her, "Have you ever even smoked a cigarette?"

"No," Blumfield replied, and the two began arguing for a few moments, before the woman left.

"See? This is why you have to have legislation. Politeness doesn't work."