Will NY Democrats Actually Do Something About Albany's Broken Rent Laws?

Much of the attention on the elections next week has been lavished on the House and Senate, where Democrats are trying to seize enough power to meaningfully derail President Donald Trump’s agenda. The stakes are incredibly high, but for anyone living in New York City, this Election Day is particularly important—it may well determine the fate of housing as we know it.

The New York State Senate is up for grabs. Republicans hold a one seat majority and are playing defense in nearly a dozen seats. The Independent Democratic Conference, a group of breakaway Democrats who helped keep the Republicans in the majority, are no more. Republicans have defied forecasts to hold onto the Senate before—it’s important to remember their districts were gerrymandered to keep them in power—but this year appears to be different.

Most significant housing policy is set at the state level. New York’s affordability crisis, ultimately, is in part a function of Albany. Since 1997, when Republicans in the State Senate (following a City Council vote) voted to allow apartments to exit the rent-stabilization program when they reach a certain rent threshold, hundreds of thousands of units of affordable housing have been lost. New York’s affordable housing program, once far wider reaching, has been cut down considerably.

With one brief exception, Republicans have controlled the State Senate for the last half century, a startling fact few voters are aware of still. There are a variety reasons for the GOP’s long dominance of the upper chamber—gerrymandering, an electorate that used to be more conservative, a coherent state party, complicit Democrats—and its eventual end could mean the enactment of more progressive, ambitious housing policies in the five boroughs.

Why? A lot of it dates back to the 1970s, when New York City was on the verge of fiscal ruin. Land was cheap, crime was high, and people were fleeing the city. To both right the ship and increase their power, governors and state legislators enacted new controls to tame a city that had been such a dominant political force in New York State.

In 1971, the Urstadt Law was passed, barring the city from adopting rent limitations that are “more stringent or restrictive than those presently in effect.” The law, nearly a half century later, remains on the books: the city council and mayor cannot pass any housing law that is stronger than existing law. In essence, this means any new housing law to protect affordable housing, expand rent control, or even protect what exists must be approved by the state legislature and the governor.

The real estate and landlord lobby reviles New York’s rent stabilization and rent control programs, and would prefer to see them killed altogether. They have pumped millions into the coffers of the Senate Republicans, who have always been staunch allies of the Real Estate Board of New York, the industry’s powerful lobbying arm. Governor Andrew Cuomo has also formed a close alliance with REBNY, taking more than $12 million from real estate interests since his first election in 2010.

Now, the real estate lobby is actively panicking. In September, the New York Post—always a Republican-friendly tabloid—ran a story with the headline “Landlords are terrified Democrats could take control over New York.” 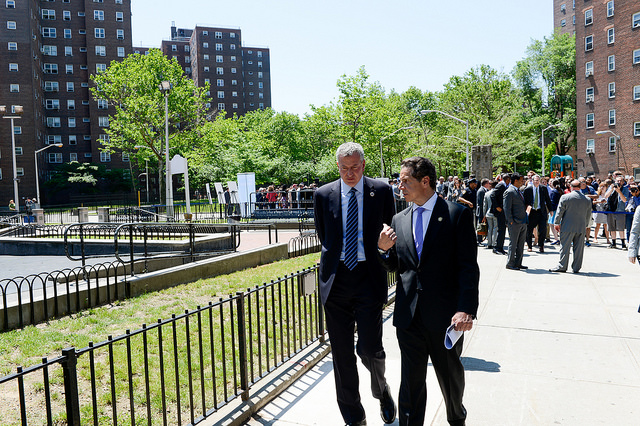 Next year, all of the laws governing the city’s rent-stabilized and rent-controlled housing stock are up for renewal in Albany, as well as other key tenant protections. In recent history, they have come up for renewal in four-year cycles—each time legislators have been in session to vote on these regulations, Republicans have sat in the majority.

For affordable housing advocates, repeal of the Urstadt Law has always been a dream, never even worth consideration for the GOP. Several of the State Senate Democrats who won primaries in September, including Zellnor Myrie, Jessica Ramos, and Julia Salazar, campaigned on scrapping the Urstadt Law and handing control of the city’s rent laws to the much more liberal city council.

If Democrats have the majority, an increasingly restive caucus with new, New York City members could force debate on Urstadt. Cuomo has never supported such a sweeping change to housing law and will be loath to give up state power. But he also has been tacking left and stoking speculation of a presidential run. On housing, he can prove whether he’s had a real change of heart.

There are other fixes Cuomo is more likely to support, or at least not actively scuttle if Democrats are running the Senate. Democrats have long sought to repeal vacancy decontrol, a favorite of landlords who always want the option of making rent-stabilized apartments market-rate, and an end to the ability of landlords to hike rent every time they make capital improvements to apartments or buildings. Democrats in the Senate are also expected to seek to repeal the “vacancy bonus,” the right of a landlord to raise the rent as much as 20 percent when a rent-stabilized apartment goes vacant, and end the preferential rent loophole.

All of these could greatly stem the loss of affordable housing, but the question a lot of advocates and progressives are asking is how New York can get housing back. Successful, progressive State Senate candidates in the city (along with Cynthia Nixon, who lost her race to Cuomo) campaigned on the idea of universal rent control, which was, at times, ill-defined on the stump.

Any movement toward universal rent control—expanding the kinds of protections enjoyed by tenants in rent-stabilized units, including regulated rent increases and an offer of lease renewal to every tenant in the city, and a push to re-regulate apartments that were lost to the market—would face vociferous resistance from the real estate lobby, who could appeal to Cuomo to kill the cause for good.

There are other wrinkles. Airbnb, the home-sharing giant, has fought a losing war with city regulators and the hotel industry, failing to win an argument with many Democratic elected officials that their profit model doesn’t create incentivizes for landlords to prioritize housing high-paying tourists over long-term tenants.

In Albany, they have hoped to amend state law to allow apartments to be rented out for less than 30 days if the homeowner is away. One of the Assembly Democrats who co-sponsored a bill to change the law, James Skoufis, is now running in a highly competitive, open State Senate race in Orange County. Airbnb’s PAC has spent several hundred thousand dollars on electing Skoufis to the Senate, where he could join a Democratic conference that features one of Airbnb’s fiercest critics, Manhattan State Senator Liz Krueger.

Real estate interests traditionally had Republicans in the suburbs and upstate to reply upon to halt progressives in the Assembly and Senate who backed tenant-friendly bills to cut into their bottom line. One of the key questions, if Democrats take the Senate, is if the real estate lobby (with Cuomo’s tacit approval) will seek to peel off suburban and rural Democrats, even if their districts have affordable housing to protect and struggles of their own.

As New York mutates into an ever more unequal city hostile to the working class, immigrants, and those who must fight for the bare necessities, Albany may offer a glimmer of salvation—or more false hope.

Ross Barkan is a political journalist who recently tried his hand at politics: last month he lost the Democratic primary for State Senate in Bay Ridge, Brooklyn. Read more about his run here.