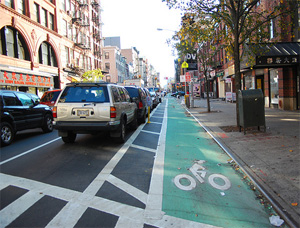 The new bike lane that extends along Grand Street between Varick and Chrystie Streets has been warmly received by many cyclists who like the way it's separated from traffic by a row of parked cars. Not so pleased are business owners through Soho, Little Italy and Chinatown, some of whom fear the bike lane will "hurt business and create a dangerous situation," according to The Villager.

Ernest Lepore, owner of Ferrara Little Italy, says, "Last week two fire trucks couldn’t make the turn," onto Mott Street. "There’s no provision for cabs, tour buses, fire trucks or ambulances." Lepore complains that he now has to schedule deliveries to Ferrara before 11 a.m. because of traffic congestion wrought by the bike lane. And his sister Adeline blames the bike lane for a dip in tourism: "There used to be 42 tour buses a day, now they’re down to 35. Little Italy is now ‘Little, Little Italy.’ The bike lane prevents people from getting here." Her brother concludes, "This could be the demise of Little Italy."

John Fratta, president of the Little Italy Restoration Association, tells the Villager, "It’s like Transportation Alternatives is running the New York City Department of Transportation. We’re not against the bike lane, but you can’t disrupt our whole traffic pattern for a bike lane. D.O.T.’s response was, the harder we make it for cars to drive in New York, the less cars will come to New York." Fratta says his group may join with others to file a lawsuit against the city to get the bike lane removed.

And at least one cyclist, a messenger named "Doug D.," is also displeased. Observed riding down the middle of Grand street instead of the bike lane, he paused to tell the Villager that he "hates it. The bike lane’s designed for people who ride their bikes slowly...I prefer dealing with cars."

Photo courtesy Rather Be Biking.