Will De Blasio Pass His "First Test" On Affordable Housing?

As the director of the Department of City Planning and chair of the City Planning Commission, Carl Weisbrod is the point man for de Blasio's vision of more equitable living spaces for New Yorkers. "In order to even have a shot at 200,000 units of housing, we have to become a denser city," the former head of Trinity Real Estate told the packed audience at New York Law School on Friday morning. "I understand that neighborhoods are wary of density. We all know that. Neighborhoods fear change...and are concerned about gentrification."

Weisbrod, who helped create Times Square as we know it today, is a living legend to many in the real estate industry, who made up the bulk of attendees at the breakfast. He was speaking exactly four months to the day Mayor de Blasio announced his ambitious affordable housing plan in heavily gentrified Fort Greene, pledging 200,000 affordable units to be built or preserved at a cost of $41 billion over the next ten years.

Real estate developers would no longer have the option of building affordable housing in exchange for a density bonus, Weisbrod said, which they could count on under the Inclusionary Zoning program. Since its implementation in 1987, that program has delivered less than 5,000 affordable units but gentrified much of Manhattan and Brooklyn.

Under the Bloomberg administration, developers received financial and other incentives to build projects that were 80% market rate and 20% affordable.

The de Blasio administration has commissioned studies to examine what percentage of affordable housing they can demand from developers, because as Weisbrod said, "it's gotta be very delicately calibrated."

"Unlike voluntary or incentivized zoning, where you have a lot of room if you get it wrong…with mandatory inclusionary, if we get it wrong, we won't get any housing. Because if it's too oppressive then the developer's not gonna build anything."

De Blasio himself has expressed support for a 50-30-20 model: 50% market-rate, 30% moderate-income, and 20% low-income. The Real Affordable For All Coalition is urging for 50/50, which is what is going to happen for the 1,000 units at Essex Crossing, a $1.1 billion development in the Lower East Side. 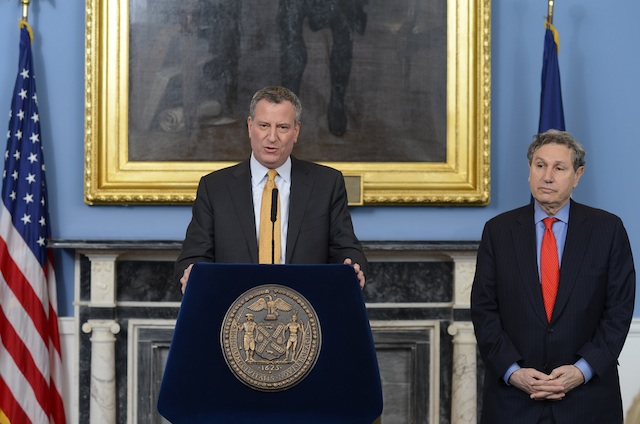 Weisbrod said that until the administration officially announces their proposal by the end of 2014, the City will implement an "interim mandatory approach," but declined to say exactly what the breakdown was.

"You can't build one unit unless you build your share of affordable housing," Weisbrod said, "There will be a minimum that the developer has to do without subsidy."

Weisbrod said the “first test” of de Blasio's approach is Astoria Cove, 1,700-unit project on the Astoria waterfront, with a mandatory affordable housing component that is already in its early stages.

But the Wall Street Journal recently reported that the plan, which he expects to go through changes on its ULURP rounds, is already running into problems with the local community, concerned that another Hipsterization is imminent.

During the Q&A session, a lawyer at a firm that specializes in real estate development issues told Weisbrod that his Twitter feed was filled with reporters asking the question, "Developers are you hearing what Carl Weisbrod is saying right now?"

"Is that a good thing or a bad thing?" Weisbrod asked.

"Carl, you're a friend and a mentor so I'm not gonna answer that question," the attorney joked.

Judy Richeimer, a tour guide, asked Weisbrod what the mayor's plan might do about imposing a cap on commercial rents, and wondered how the city is going to soften the blow of the jarring gentrification.

To the first part of her question, Weisbrod pledged that the administration was pursuing a legislative agenda in Albany to remedy the rent control issue, but he did not sound optimistic.

"We all have to remember that nowhere in the Constitution is the word 'city,' and cities are creatures of the state. All of us that have been in government have learned that sad lesson many times over."

Weisbrod then moved on to the next question.

Richeimer, who said she often hears complaints from visitors about a gentrifying city losing its spirit, was disappointed that the larger issue wasn't addressed.

"I put the question, but he did not answer my question."

Gerard Flynn is an investigative reporter living in New York. He previously wrote about the city's plan to develop affordable housing in East New York.