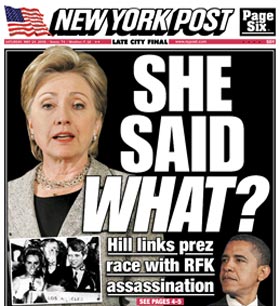 Presidential hopeful Hillary Clinton's remarks recalling Robert F. Kennedy's June 1968 assassination (as well as her husband's June 1992 California primary win), as why she was staying in the race, have caused an uproar. However, Robert F. Kennedy Jr., a Clinton supporter, said, "I've heard her make this reference before... I understand that the atmosphere is supercharged right now but I think it's a mistake for people to take offense."

Yes, Clinton did make the remark in a March interview with Time's Richard Stengel:

Time: One group that probably ultimately wouldn't want it to go on too long is the Democratic Party itself. Can you envision a point at which — if the race stays this close — and with the difficulties that everyone has analyzed in accumulating enough delegates to get any distance ahead where party elders would step in and say "Senators Clinton and Obama, this is now hurting the party and whoever will be the nominee in the fall. We need to figure this out."

Clinton: No I really can't. I think people have short memories. Primary contests used to last a lot longer. We all remember the great tragedy of Bobby Kennedy being assassinated in June in L.A. My husband didn't wrap up the nomination in 1992 until June, also in California. Having a primary contest go through June is nothing particularly unusual. We will see how it unfolds as we go forward over the next three to four months.

In one of his "Special Comment" segments last night, Keith Olbermann, though, said the media failed by not calling Clinton out when she made the remark in March, saying it was dry in print. But yesterday's mention occurred during a live webcast of Clinton's meeting with South Dakota newspaper Argus Leader's editorial board. The NY Post's reporters were watching the feed and quickly put up a story.

Obama's campaign tersely criticized the statement and Clinton's campaign first said the comments were just references, but then Clinton herself issued a statement apologizing for the statement. The Daily News told the Reverend Al Sharpton about her remarks and he said, "She said what?...The danger of her staying in is that she keeps making statements that do serious harm to the party and, increasingly, irreparable harm to her and her legacy."

Today, the Washington Post's Libby Copeland writes in an essay, "Smart candidates don't invoke the possibility of their opponents being killed. This seems so obvious it shouldn't need to be said, but apparently, it needs to be said."

#barack obama
#election 2008
#hillary clinton
#politics
#rfk
#RFK assassination
#rfk jr
Do you know the scoop? Comment below or Send us a Tip