Will Brooklyn Heights' Clark Street Station Be Closing For A Year?

Could the Clark Street station in Brooklyn Heights be facing a year-long closure for repairs? The rumor has made headlines, though the MTA has yet to confirm. And now the Brooklyn Heights Association, along with elected officials, have sent a letter to NYC Transit President Andy Byford requesting that they "consider all possible options for making these repairs before deciding to close the station completely for a year or more."

What's the problem? The station's elevators are, as Brooklyn Borough President Eric Adams declared last year, "a public safety threat." That's because the subway platform is only accessible via three rickety old elevators, which tend to break down. Since there are no stairs open to the public at this station, which serves the 2 and 3 line, this causes a problem. At best, the elevator ride is a short but terrifying experience as you hold your breath and hope your journey goes smoothly. Adams's comment came after 13 people were trapped in one of the elevators for over an hour in the fall of 2018. To make matters worse, the elevators are often overcrowded, and almost always stifling hot with very little air circulation—"What do we do here? No door. Can’t get out. It’s hot. Everyone is sweating," one of the trapped passengers tweeted last year.

After the 2018 incident, MTA spokesperson Andrei Berman said, "All of the elevators at Clark Street are set to be replaced under the current capital program. It’s a fully funded project and we are beginning replacement in the next several months."

Beyond that, the MTA declined to give more details about the design phase, the process or the timeline. Now it appears they will be issuing an RFP this July for the work. 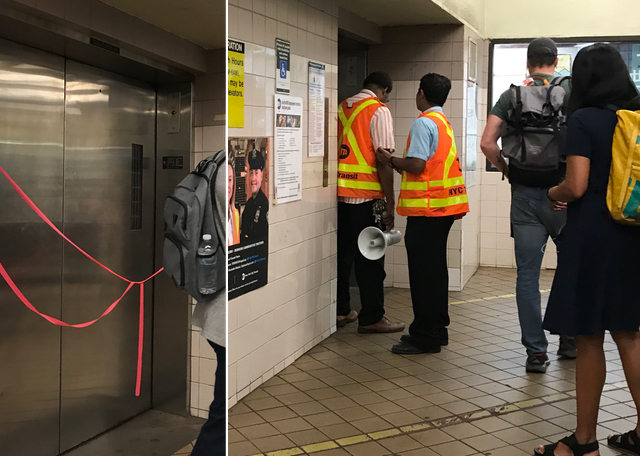 In 2018, following an elevator malfunction. (Gothamist)

The Brooklyn Eagle reported that concerned business owners within the street-level section of the station had first heard about the "potential long-term closure."

The station, served by the 2 and 3 train, is rumored to be on the list for closure to make repairs to three elevators that descend 10 stories underground. The agency hasn’t confirmed a plan, but if the information leaked by NYC Transit employees to business owners within the station are true, some of the shops might have to fold. Many of them have operated out of the arcade at the St. George Tower at the corner of Henry and Clark streets for decades.

While New York City Transit employees have been speculating out loud about the MTA’s plans for a year-long shutdown to repair the station’s three ailing elevators, the agency is not sharing this information with the businesses that depend on the station’s subway commuters to make a living.

BP Adams recently released another statement regarding the station, saying, "For whatever reason, proactive transparency continues to be a challenge for the MTA. Repairs to the unreliable elevators at the Clark Street subway station are a health and safety imperative that cannot be deferred any longer, and commuters and small businesses need to know how to plan for the construction to come as early as possible. Even publicizing a timeline to finalizing a construction timeline would be appreciated at this point." Adams was not the only elected official demanding clarity on the station's fate.

Upon inquiring about this plan, we were told that the MTA could not confirm or deny this information in advance of the release of the request for proposals. Given the impacts that a year-long closure would have on the surrounding community and the businesses located within the station, we are requesting clarity on this matter. In addition to the impact on its immediate businesses, a full station closure would also impact many small businesses along Clark and Henry Streets, as well as those residents whose mobility problems would make a walk to the Borough Hall or High Street stations difficult, if not impossible. We ask for a more transparent engagement process that includes elected officials and the local community.

According to the source of the rumor, an unnamed station clerk, the shutdown would be 24/7 and could happen in January 2020. We've reached out to the MTA for more insight, and will update if we hear back.

Should the closure occur, nearby stations will have to take on the displaced riders. The closest station is High Street (A/C), but riders hoping to take the 2/3 will have to walk to Borough Hall (which is around an 8 minute walk from the Clark Street station).