Will Bloomberg Third-Party On? 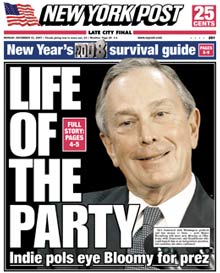 Yesterday, the Washington Post reported that Mayor Bloomberg would be meeting with other Republicans and Democrats to "consider the merits of a third-party bid for the White House." Which means that today, not only do we get a NY Post cover, we also get a NY Post Photoshop illustration of Bloomberg, Gary Hart and Christie Todd Whitman (two other meeting attendees) as Revolutionary musicians!

Former Democratic senators David Boren and Sam Nunn are organizing the January 7 meeting (the day before the NH primaries) at the University of Oklahoma; Boren explained the pow-wow would be like "shock therapy" to the traditional parties' candidates, "It is a message to the two parties: Please rise to the occasion. If you don't, there is always a possibility out there of an independent....We need statesmanship, not politics."

Boren also told the Daily News how much Mayor Bloomberg's presence is valued, "He's shown the ability to bring people together. He brings to the table a tremendous wealth of personal experience, and his commitment to bipartisanship is very strong." And Bloomberg also brings tremendous literal wealth to the table!

The NY Times reports Mayor Bloomberg is "growing increasingly enchanted with the idea of an independent presidential bid" and essentially confirms what we've suspected: His staffers are working "aggressively laying the groundwork for him to run." Boren said that Bloomberg-Hagel (as in Chuck, the Nebraska senator) and Bloomberg-Nunn tickets might be the strongest: “Normally I don’t think an independent candidacy would have a chance. I don’t think these are normal times.”

The Daily News has a graphic showing the meeting's attendees, who include Clinton-era Secretary of Defense William Cohen and Ike's granddaughter Susan Eisenhower.