Police released surveillance video of a person of interest in yesterday's fatal subway shoving in the Bronx. Wai Kuen Kwok, 61, had been waiting on the southbound 167th Street D train platform with his wife when a man, an apparent stranger, suddenly shoved him into an oncoming train. His 29-year-old son said, "Please tell the world he is a fine, regular family man."

Kwok and his wife had been on their way to have lunch and buy groceries in Chinatown.
According to the Daily News, "Kwok’s distraught wife told investigators the sickening 8:45 a.m. attack came out of the blue, saying there was no interaction between her husband and the man before the deadly push." (WABC 7 said, "Subway riders tell Eyewitness News it could have been over an attempted cell phone robbery, however police have not confirmed those details.")

The train's motorman said Kwok "suddenly flew in front of the train," but he wasn't able to stop the train in time. Kwok's wife wasn't injured but she was taken to the hospital for trauma. 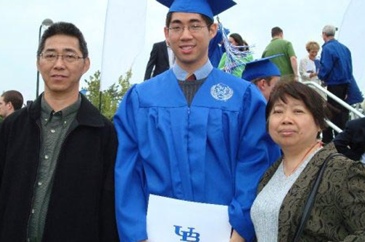 The Post reports that the video shows a "balding man dressed in a black leather jacket, black pants and white sneakers calmly sauntering outside the station after the crime. He then hopped onto a Bx35 bus at Grand Concourse and East 167th Street, where at least one straphanger also was waiting because train service was halted after Kwok’s death."

The “customer recognized him and thought he was the subway pusher,” a source said. “The person was too scared [to speak up] and feared for his life, so he waited until the end of the line [before alerting the bus driver].”

By that time, up to 30 minutes had passed since the man he suspected was the subway pusher had gotten off, sources said. The bus driver quickly called police, who tracked down surveillance video near where the suspect had exited the bus just a few blocks from the subway station.

The Post adds that Kwok worked six days a week at a factory in DUMBO that produces kitchen accessories; one of his two sons said, "He provided for his family. He wanted us to be successful. His plan was to work and get his sons through school."

Here's video of the person of interest:

Anyone with information in regards to this homicide is asked to call the NYPD's Crime Stoppers Hotline at 800-577-TIPS. The public can also submit their tips by logging onto the Crime Stoppers Website or texting their tips to 274637(CRIMES) then enter TIP577.