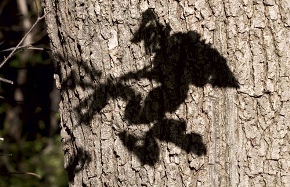 The Staten Island Advance has been following the turmoil brewing between a Wiccan family and their neighbors.

The South Shore home at the center of the controversy is a duplex, half belonging to the Wiccan devotees, Ivy Colmer Vanderborgh, her husband and mother (the husband isn't Wiccan). Not hiding their practices, their property is decorated with a "witchy weather vane and cauldron out front," along with a massive stained-glass pentacle.

Before the front yard cauldron tipped locals off however, they were "exposed" when they appeared on a Staten Island Community Television show about their religion two years ago. Since then, neighbors have allegedly been verbally harassing them and damaging their property (for which one neighbor was arrested). They also claim their dog Buffy, who died, was poisoned.

The allegations are going both ways, though. Neighbors say they receive letters (often in the form of fliers under their windshield) from the Wiccan duo threatening to cast a spell. There are also frequent noise complaints, and today the SI Advance reports that neighbors are not too happy about the family feeding stray cats by leaving open cans of food on the sidewalk; something they say is attracting rats.

The Wiccans claim their religion is being persecuted by their neighbors, and they're being unfairly treated by the police. The police just seem fed up, with one telling the Advance, "It's a situation whereby one neighbor's actions or behaviors are clearly aggravating other people on the block. However, it does not appear that these behaviors are in violation of the law, nor does it appear that the religious practices of the family have anything to do with the neighbors' frustrations with the family."

Photograph of a witch shadow by Atomische on Flickr