Why Working Class Women Are Better Off Injured Than Pregnant

On a recent Saturday morning, Yvette, a mother of three, took her two daughters, ages 7 and 23 months, to the cheerful playground next to Brooklyn's Bay Ridge High School.

As we walk to the playground, Yvette introduces me to her daughters.

"Are you excited for summer?" I ask her 7-year-old as she skips next to the hot-pink stroller her younger sister is riding in. "Yeah!" she cheerfully replies.

Yvette waits until we've reached the playground and she's released her youngest daughter from the stroller to start talking about the recent loss of her job at the high-end grocery chain she's been working at since 2002. "It makes them sad to hear about it," she explains.

Yvette, who asked that I only use her first name to avoid alienating future employers, was a manager in the store's bakery section when she became pregnant with her oldest daughter in 2005. She spent much of the pregnancy lifting trays and pushing and pulling heavy carts around the bakery, rarely stopping for breaks.

"The [manager's] attitude was, 'If you can't do this job, you go,' " says Yvette, shaking her head. Determined to collect her holiday bonus and make as much money as possible before her daughter arrived, she worked eight hour shifts, six days a week, until December 21st, 2005. Her older daughter was born eight days later.

But things had changed by the time Yvette found out about her most recent pregnancy in 2010—a series of miscarriages between the two pregnancies had led to the discovery of a clotting disorder. This time, when Yvette came back to work after her first prenatal appointment, it was with a list of restrictions from her doctor: no lifting over 5lbs. and no more dragging around heavy bakery carts.

The store manager took one look at Yvette's doctor's note and said, "There's no job here for you like that."

As upper-income professional women continue to debate the merits of opting out or leaning in, most working women in New York City can't march into their boss's office and demand a special pregnancy parking spot, as Sheryl Sandberg famously did during her own pregnancy.

"We have a situation where pregnant workers are being treated worse than other workers," explained Dina Bakst, the co-founder of A Better Balance, a New York nonprofit that advocates for low-income, working families.

"[This issue] disproportionately impacts low-wage women and women in physically demanding jobs," says Bakst. "Women don't have a clear legal right [to a reasonable accommodation], and yet disabled workers—you know, a man could come back from a ski accident and it's like, 'Let me get you an ergonomically designed chair.' "

Yvette claims that the store had accommodated employees with minor disabilities in the past. "One woman, she hurt her shoulder," she says, angry tears filling her eyes. "They gave her a job re-shelving lighter items." Yvette says she also offered to work at the cash register or in the office of a different branch, to no avail.

Eventually she was given meager disability payments for a portion of her pregnancy, and she spent the remainder on unpaid leave. Last month, Yvette left her job at the grocery chain.

For "B," who was working at a small, high-end restaurant in New York City when she became pregnant in December of 2011, the financial consequences of pregnancy were enormous. Before becoming pregnant, she was working six to eight hour shifts, with no breaks, and one 12+ hour double shift per week. Early in her pregnancy, faced with exhaustion and alarmingly swollen feet, B asked her longtime manager if she could drop the double shift.

"The owner said if I wanted to give up a shift it would have to be the evening shift, as restaurant policy was that all staff had to work a brunch," B wrote in an email. "The problem was that during a brunch shift, you would usually earn around $50, whereas a Saturday night would bring in $250. The difference in my monthly wage after giving up this, my highest earning shift, would be around $1000, or my rent."

Faced with a stark choice between her health and paying her bills, B gave up her Saturday evening shift, and, as she says, "got in a big old financial hole it took me around a year to get out of. All the medical and other bills added up." (B asked that I identify her by only her first initial to avoid causing problems for her former employer, whom she still hopes to use as a reference.) 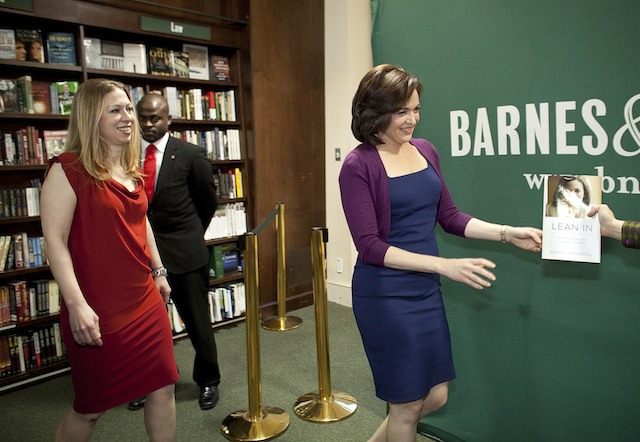 B chose not to file a charge with the New York Human Rights Commission, as she didn't want to cause problems for her bosses, people she'd known and liked for ten years. But their unwillingness to make a temporary accommodation still frustrates her.

"I am a VERY strong, responsible, reliable, hard working and well-presented server. I am extremely conscientious and was often asked to go beyond the call of duty and train new staff, attend tastings, etc.," she said. "Aside from having difficulty with the long hours engendered by a double, I was still an excellent (pregnant) employee. Also, I thought they were my friends and would look out for me, but as one manager (who I'd known for years) said, 'I have to put the restaurant first.' "

If Yvette or B hadn't been pregnant and had required temporary accommodations for an injury—a shoulder or a back injury, for example—their employers would most likely have been required to provide the women with a "reasonable accommodation" (unless doing so would impose an "undue hardship"), under the Americans With Disabilities Act.

But while the ADA provides protections for pregnant women suffering from more severe pregnancy-related "disabilities" like preeclampsia, it doesn't require employers to provide pregnant women with the kind of small modifications they may need to stay on the job, because pregnancy itself isn't considered a disability.

Technically, women like Yvette and B are supposed to be protected by either the federal Pregnancy Discrimination Act (PDA) or the sex and disability protections of the New York Human Rights law.

In practice, it doesn't work out like that for most low-income women. "There's a gap in protection under the law," explained Katharine Bodde, Policy Counsel at the NYCLU. "Courts have not interpreted the federal Pregnancy Discrimination Act to require employers to provide reasonable accommodations."

Pregnant women in New York also have the option of filing a charge with the New York State Division of Human Rights, but the process can take weeks or even months, by which time it's too late for most women.

"If you're pregnant and you want to find out if you can have a stool or an extra bathroom break, you don't have three months to get that decision," said Bakst.

In New York, all this may be about to change. This month, the New York State legislature will vote on Governor Andrew Cuomo's proposed Women's Equality Agenda. So far, the reproductive health provisions of the legislation have gotten the most attention, but the full package is targeted directly at improving equality for low-income, working women, including those who suffer from pregnancy discrimination.

"It's really about breaking down barriers that get in the way of equal opportunity—whether it's in the workplace or in society," said Bakst.

If the law passes, employers in New York would be required to provide "a reasonable accommodation for pregnancy-related conditions unless doing so would cause an undue hardship on the employer." As far as Dina Bakst and Katharine Bodde are concerned, it's a change that's good for women, employers, and an over-taxed state system.

The "reasonable accommodations"—which in practice are often small things like extra bathroom breaks, a stool to sit on, or the ability to carry a water bottle around—often cost employers very little. A similar law in California, passed in 1999, was estimated to have a de minimis cost for employers, and also ultimately served to reduce pregnancy discrimination cases in the state at the same time they were increasing nationwide. Keeping women on the job also reduces turnover and training costs for employers as well. 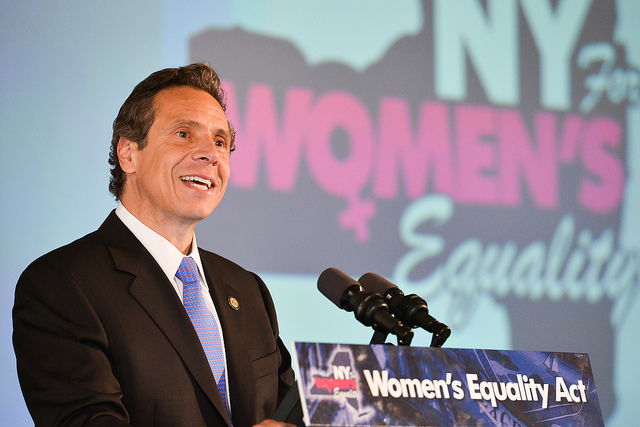 Governor Cuomo speaks about the Women's Equality Act at Vassar College on June 6, 2013 (via)

"What Legal Aid in California told us, is that women would go to their employer and say, 'You have to try to make a reasonable accommodation,' " explained Bakst, who helped draft the New York legislation. "If it's unreasonable, you don't have to do it, but it's an interactive process. And by doing that, most employers can find a way to make it work."

"It's so difficult to get women in these non-traditional jobs. They're higher-paying and they provide benefits, but they're traditionally structured for men and you know, once they get pushed out, they can't get back in."

Julie DeSantis-Mayer, for example, had worked as a driver at UPS for nine years, often averaging 60 hours of work per week, before she became pregnant in March of 2012. After her first prenatal appointment in April of 2012, DeSantis-Mayer requested a temporary light-duty position that didn't require heavy lifting or lowering, like the kind of secretarial work or window-washing tasks she'd been given after an on-the-job injury in January of 2012.

"I provided them with a very long list of things I was able and willing to do," DeSantis-Mayer said, adding that she also offered to transfer locations. The company, which has a history of accommodating non-pregnant workers with disabilities—including drivers with suspended licenses due to DUIs—claimed they couldn't find a job for her.

She spent the remainder of the pregnancy on unpaid leave and lost her medical benefits in September of 2012, while she was still pregnant. DeSantis-Mayer filed for unemployment and clipped coupons to make ends meet until she was able to return to work.

"It's corny, but between me and my friends, we started couponing," DeSantis told me. "I'd call it a mommy network."

DeSantis-Mayer and the NYCLU have filed an EEOC charge against UPS. A spokesperson for UPS emailed me the following statement in regards to DeSantis-Mayer's case:

In a case filed in Maryland, the 4th Circuit Court of Appeals found UPS's policy regarding pregnant employees was "pregnancy blind." The ruling held that UPS policies do not discriminate against pregnant workers, and UPS is not required to provide light duty work.

At UPS, temporary alternate work is provided to employees who suffer injury on the job.

A national version of the law, the Pregnant Workers Fairness Act, was recently re-introduced in Congress, although Bodde doesn't expect the bill to move anytime soon, as Republican lawmakers argue it will increase costs for employers. Both Dina Bakst and Katharine Bodde are optimistic about the legislation's chance of passing in New York and believe the state can serve as a model for the rest of the country.

For women like Yvette and Julie DeSantis-Mayer, the change can't come soon enough.

Back at the playground, a light drizzle had started to fall, and Yvette called her daughters back to her before reflecting on her situation. "I just got tired of fighting."

Dwyer Gunn is a freelance journalist and the co-editor of the Freakonomics blog.

#governor cuomo
#pregnancy discrimination
#UPS
#women's equality agenda
#longform
#original
Do you know the scoop? Comment below or Send us a Tip