Why The North Honored Confederates: 'These Are Not Just Innocuous Monuments'

While President Donald Trump mourns the removal of "our beautiful statues and monuments" this week, Mayor Bill de Blasio has pledged to conduct a three month review of "symbols of hate" throughout the city. Governor Andrew Cuomo Wednesday announced his decision to remove busts of Stonewall Jackson and Robert E. Lee on a public college campus in the Bronx, the same day St. John's Episcopal Church in Fort Hamilton removed a Lee plaque installed by the Daughters of the Confederacy. The Governor has also urged the federal government to rename a streets in Fort Hamilton that bear Lee and Jackson's names.

We spoke to Manisha Sinha, Draper Chair in American History at the University of Connecticut and author of The Slave's Cause: A History of Abolition, about the importance of removing reverent symbols of the Confederacy—regardless of the political motivation to do so—where those symbols belong now, and why this domino effect didn't tip sooner.

What we've seen in New York City this week is a sort of political mad dash to seek out these symbols and publicly condemn them. What about last weekend's White Supremacist rally in Charlottesville prompted this rush? Why now?

The whole debate over taking down Confederate statues did not involve such a show of force from neo-Nazis and their sympathizers until Charlottesville. I think that is why politicians are standing up against it now. It is too hot to ignore.

I think better late than never. Historians have been talking about this for some time. This notion that somehow Confederate monuments and the Confederate flag itself are innocuous symbols of southern history and heritage is simply not true. Whether politicians have finally woken up to this, or are doing this for sordid political reasons, I think it is better to have many of these monuments removed.

All responsible public officials have to reckon with this. Because these are not just innocuous monuments that are lying there. There are people are rallying around these monuments. 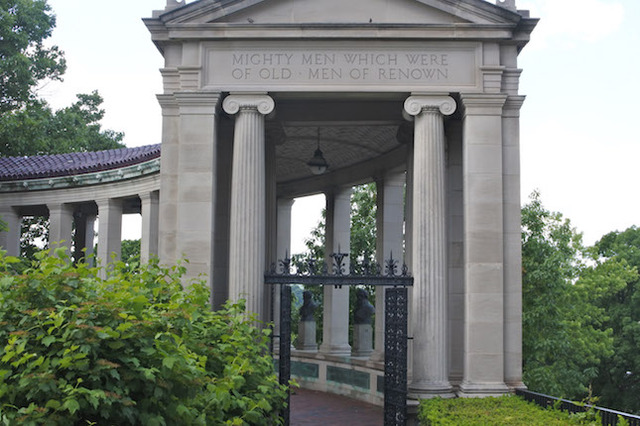 Where does President Trump fit in this racist Confederate legacy?

The fact is that many of these commemorations to the Confederacy have come in moments in history when you've got people defending either Jim Crow or White Supremacy. If you look at when most Confederate monuments were built, it was around the 1920s and 1930s, which was the height of Jim Crow: lynching, racial violence against black people, sharecropping, debt peonage. And the next time you have a flurry of monuments to the Confederacy, and the Confederate flag being added on to state flags, was during the white resistance in the South to desegregation and civil rights.

So if you look exactly at when these monuments have been built, it's quite obvious that these have been tainted right from the start. Right from the start they represented a commitment to white supremacy and racism. I mean, Hitler himself said the South should not have lost.

The tragedy of the Republican Party is that it has been reinventing itself as a party of white resentment since the Civil Rights movement. Trump, we normally see him as an aberration. But I think he's the culmination of this trend within the GOP.

It seems every period of "racial progress" generates a racist backlash. Like [President] Andrew Johnson after the Civil War, Trump legitimizes such forces by his words and actions. 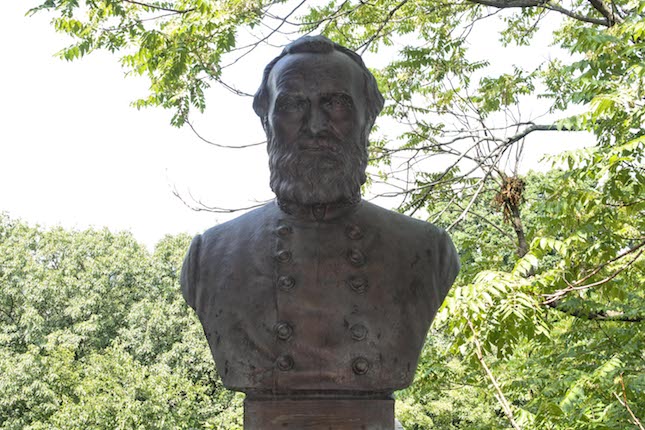 A bust of Stonewall Jackson in the Bronx's "Hall of Fame" (J.B. Nicholas / Gothamist)

How has the racist legacy of the Confederacy been sanitized across the country, and in Northern cities like New York in particular? Why does New York have these monuments?

What happens after the fall of Reconstruction, which was this brief moment when you had black rights and black citizenship being implemented in the South—after that the South is so-called "redeemed" by White Supremacists, by the KKK, by the Democratic party. It is at that moment that you have a national reconciliation between the North and South.

The North pretty much abandons the attempt to enforce the civil and political rights of black people. And they give home rule to the South. And what you have in the South is a mass program of terror that disenfranchises black people and completely goes against the Constitution. But you have this sort of white reconciliation between the North and the South and it comes at the expense of black rights.

It's not as if there weren't forces that rejected this. This is when you had the founding of the NAACP, but the dominant political scene is this reconciliation and the Civil War being portrayed as this fight of brother against brother. And the Civil War is portrayed simply as honorable Southerners like Lee fighting for state rights and home rule. [The Civil War] is seen as a sort of misguided bad event, and the country was finally reconciled. At the turn of the century, you see the appearance of Confederate general statues in the North in certain places.

What should US governments do with these monuments, once they're removed?

There have been instances in Germany and Eastern Europe where people have taken down statutes of dictators and tyrants, smashed them, and reconfigured them as new pieces of art. With their broken pieces. I think that may be a good way for us to deal with our own tyrants, our own symbols of people whose terrible views on slavery and black people have not received the same kind of airing.

I am completely against the multicultural and pluralistic idea: let the statue be here and then have the statue of Frederick Douglass next to him. In fact, Douglass would be rather uncomfortable with that because he was very much against commemorating Confederates who he saw as treasonous people. Douglass was very vocal in the end of his life of condemning this memorialization.

This notion that we should live and let live, that's not the way history works. When you include African American history in the narrative of American History, it's not simply adding something that was left out. It's also presenting a more complex, a more nuanced view of history. And I think that is what is really needed.

#confederacy
#Manisha Sinha
#symbolism
#symbols
#original
Do you know the scoop? Comment below or Send us a Tip