In 2014, New York City set an ambitious goal: to reduce greenhouse gas emissions by 80% by 2050. Making solar energy status quo in the city could dramatically reduce emissions from the city's buildings, which account for the majority of the city's emissions, but while NYC's been getting its share of solar-powered trash compactors and charging stations as of late, rooftop solar panels still aren't a very common sight.

According to a solar map put together by CUNY, some 66% of city rooftops are capable of harnessing solar power, and the number of solar companies in the city has skyrocketed over the past decade, from just five to over 50. Expanding solar hasn't been a total bust—indeed, the past two years have seen something of a boom, with the number of installations now adding up to about 75 megawatts—but much of that growth has been in the public sector, and there's still a long ways to go before the city can reach its goal of 350 megawatts of solar energy installed citywide.

The City Council convened a hearing today to tackle this very question: after all, we know that sea levels are rapidly rising and the days just keep getting hotter, so what's keeping us from quickly and easily ditching fossil fuels for solar energy?

"New York City has enough solar radiation resources to move away from its dependence on fossil fuels," said City Councilmember Costa Constantinides, who chairs the council's Environmental Protection Committee, and further argued that if the barriers of time and money could be rolled back, more people would be likely to install solar. "We need to take steps to facilitate solar energy adoption," he urged.

The real holdup, it appears, is that installing solar energy in NYC is a nightmarishly bureaucratic process that involves jumping through hoops with the Department of Buildings, the FDNY, and Con Edison, not to mention the legwork involved if one would like to simultaneously apply for a property tax abatement, which would reduce taxes on a solarized property and is one of the primary incentives for doing so.

Until recently, the application process with the DOB could take anywhere between four and eight weeks. It's now been reduced to two weeks, but if the roof of the building is flat—as most rooves in the city are—there's a whole separate process of getting the FDNY to grant an exception, which, bafflingly, won't be able to be done online until 2019.

Here's a flow chart showing how fun this process can be: 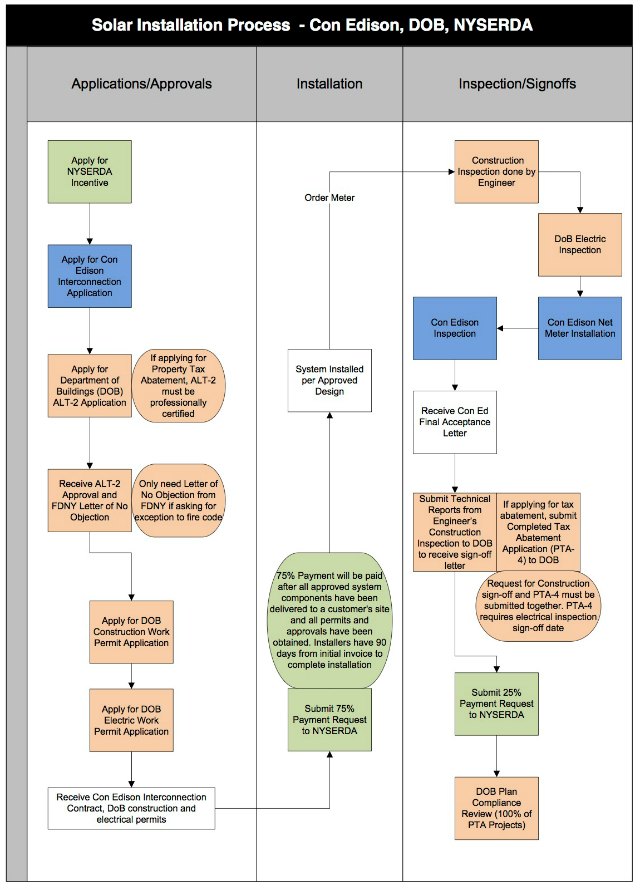 Does your head hurt yet? (Con Ed)

Then there's the loathsome task of getting the DOB to inspect the property—just one of numerous inspections that has to be done before work can begin—which can drag on because there's no way of specifying a convenient time for the inspection, solar energy installers complained. And that's not to mention the hassle that ensues if installing a solar panel would require doing work on more than one building rooftop at once, which isn't uncommon in many dense parts of the city.

"Most development has happened on roofs of suburban family homes...in short, in settings which contrast significantly in their social composition with much of our city," pointed out Chris Neidl, director of Here Comes Solar, in response to the city's assertion that solar development has increased over the past two years. Indeed, most of the solar installations on privately owned property have been on Staten Island, the most suburban of the five boroughs. "To be sure, many of the factors that limit solar potential in our city may never be overcome—that's just a fact of urban density," Neidl added. "However, we're a long way from reaching our potential."

But things may be looking up: in an effort to expand access to lower-cost solar energy in the city, Mayor de Blasio recently launched a program called Solarize NYC, which will allow communities that have historically had limited access to clean energy to receive financial support and technical assistance from the city. It's not yet clear how well the month-old program is working, but a pilot program conducted at Brooklyn's Community Board 6 led to over 400 site inspections and will ultimately lead to 150 kilowatts of installed solar energy, according to the Mayor's Office of Sustainability.

In order for solar energy to truly become widespread in the city, those testifying at the City Council's hearing argued, there would need to be some significant bureaucratic changes. Many representatives from the solar energy industry pointed out that the recent improvements at the DOB, bringing down the turnaround time on applications from as many as eight weeks to two, are a small change when considering the myriad steps involved in getting through the installation process. And at the rate climate change is progressing, they said, any unnecessary wait time is too long: Ruth Hardinger, representing Damascus Citizens for Sustainability, argued that "it's urgent that we get off fossil fuel and natural gas...this is about life."