Why Is The Next Phase Of The Queens Boulevard Bike Lane Still In Limbo?

Last July, for a little over 24 hours, “no parking” signs appeared on a stretch of Queens Boulevard in Forest Hills. The city’s Department of Transportation had placed the signs there in anticipation of a project workers within the department, as well as transit advocates, were long excited for: new bike lanes along an eastern portion of Queens Boulevard, traditionally the borough’s most dangerous thoroughfare.

A day after DOT workers put the signs up, officials with Mayor Bill de Blasio’s office told them to take the signs down, according to a DOT official familiar with the matter. The DOT was instructed not to paint bike lanes in Forest Hills, failing to complete what would have been the fourth phase of a bike lane expansion that has proved popular with cyclists and transit advocates while cutting down on pedestrian fatalities.

The move was strange, considering how central the bike lane rollout had been to de Blasio’s “Vision Zero” initiative, his ongoing push to make streets safer for pedestrians and cyclists. Queens Boulevard, once known as the “boulevard of death,” was long a de Blasio administration priority—on a hot summer day in 2015, de Blasio and DOT Commissioner Polly Trottenberg announced a $100 million effort to redesign the boulevard, add bike lanes, and transform the perilous stretch into a “boulevard of life.”

Since that day, there have been only three pedestrian fatalities on a boulevard that once saw as many as 18 deaths in a single year. 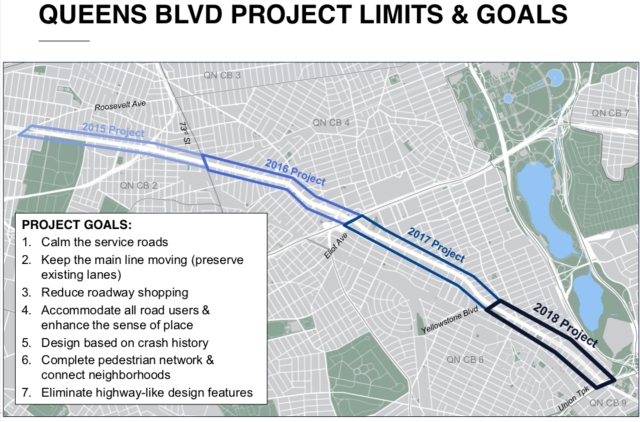 No official explanation was given for the indefinite delay of phase four of the Queens Boulevard bike lane, which would add lanes from Yellowstone Boulevard to Union Turnpike near Queens Borough Hall. Transportation advocates, the local community board, and even officials within the DOT have not been told when the project will resume. With the weather warming, late March is typically the time the DOT lays the groundwork for projects they hope to finish over the course of the summer.

Inside the DOT, a culprit quickly emerged for the stalled bike lane: a proposed jail in neighboring Kew Gardens, which, like Forest Hills, is represented by veteran Council Member Karen Koslowitz. The facility, a part of de Blasio’s borough-based jail system that would replace the isolated and violent Rikers Island, would be housed in the old Queens House of Detention.

City Hall rolled out plans for the controversial jail last August, shortly after the bike lanes—also a source of heated debate in the community—were indefinitely shelved.

“The timing is no coincidence,” a DOT official familiar with the matter argued, requesting anonymity to discuss a topic sensitive to City Hall. “They want Koslowitz’s support and know they can’t have her take two political hits for this.”

A mayoral spokesman, Seth Stein, did not answer questions about when construction on the bike lane would begin or if there was any link between City Hall’s push for a new jail and its decision to delay implementation of phase four. “We are moving forward with the redesign and working with the community,” Stein said. “We’ve completed four miles of redesign on Queens Boulevard, driving fatalities to a record low, and will continue working through this last, most challenging section.”

The proposed final leg of the Queens Boulevard bike lane has been far more contentious than the other three. All previous sections were generally, at least initially, supported by neighboring community boards. Community Board 6, encompassing Rego Park and Forest Hills, voted against phase four last June. The vote was advisory and DOT indicated at the time they would move ahead anyway.

Board members opposed to the bike lanes expressed fears about the loss of parking—approximately 200 spaces would be removed—and how this could hurt the bottom line of small businesses.

“Storekeepers around here are not thrilled with the bike lanes,” said Frank Gulluscio, the district manager of Community Board 6. 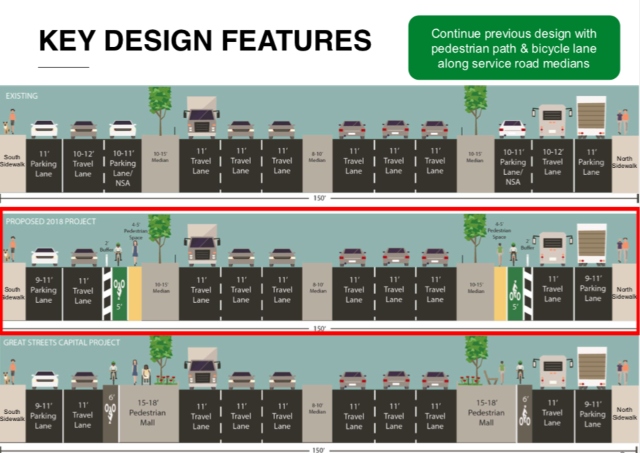 The completed third phase of the bike lane expansion reached into Rego Park, where residents are more likely to own cars. While no independent analysis has been conducted to measure the effects bike lanes on Queens Boulevard have on local businesses, the backlash has been real. Led by Ben’s Best Deli in Rego Park, which blamed the bike lanes rather than changing tastes for its demise (traditional diners and delis have shuttered across the city as rents rise and demographics shift) the opposition has successfully swayed Koslowitz, who no longer supports phase four of the project as currently proposed, according to her chief of staff, Michael Cohen.

At the moment anger over the bike lanes reached a crescendo, City Hall needed Koslowitz’s backing for a new jail. In order to site a jail in Kew Gardens, the city requires Koslowitz sign off in the uniform land use review process, or ULURP. Koslowitz is a tentative supporter of the jail. At a public meeting in February, community members reportedly heaped scorn on a Koslowitz representative for explaining why she wasn’t outright opposed to the jail.

The size of the proposed jail has unnerved some residents. At nearly 2 million square feet, it will be quadruple the size of the existing building and house 1,500 inmates when it is projected to open, like other borough-based jails, in 2027. The new jail will have a community space and ground-floor retail. Opponents have cited everything from increased fears of crime to congestion to oppose the jail. (In downtown Brooklyn, a long-standing local jail has not increased crime or been linked to further congestion.)

For City Hall, undertaking the controversial siting of a jail and the rollout of a bike lane opposed by the local council member and a majority of community board members may be too much to handle—or a case of not thinking political priorities through. Within the DOT, frustration has built as no new guidance has been offered about the final phase on Queens Boulevard. “The politics are starting to favor the jail,” the DOT official said, comparing the situation with the stalled bike lanes to no one “clicking reply” on an email. “There’s been radio silence from City Hall [with phase four].”

Transit advocates, seeking answers, are despairing as well. After months of trying to communicate with City Hall behind-the-scenes, some are considering becoming more confrontational as the clock ticks away on de Blasio’s last term and the lame duck executive sets his sights on the White House.

“It would be a crime if somebody dies in the next section of roadway while we wait for this promised bike lane,” said Peter Beadle, a Community Board 6 member and transportation activist. “We cannot be playing games with people’s lives. I sincerely hope we don’t go there.”

#bike lanes
#cyclists
#queens
#queens boulevard
#vision zero
#we the commuters
#original
Do you know the scoop? Comment below or Send us a Tip