Why Is The Cuban Government Suppressing Havana's Tattoo Artists?

This is the third of several dispatches from Cuba by Gothamist's Lauren Evans and photographer Tod Seelie.

The first knock came around three weeks ago. Che Alejandro was in his studio, which, like most of Cuba's tattoo studios, consists of a small, spartan room in his own home. The inspectors—a pair of women—didn't immediately identify themselves as government workers, opting instead to gain entry by pretending to be customers.

Che's assistant knew something was up the moment he answered the door. "They had tattoos, but they just didn't look like they were into tattoos," Che recalled when I met him in late May. "They kept changing their story about why they were there."

They were there to confiscate his tools, and tell him he was no longer permitted to do his work. Che had been waiting for the knock. He'd already heard from more than a dozen other tattooists who'd received the same visit.

Tattooing has long occupied a legal gray area in the Cuban economy. Since taking over for his brother in 2008, Raúl Castro has slowly softened the country's stance on entrepreneurship, but still maintains tight control over what, exactly, those enterprises are: A booklet of 201 permissible professions—called cuentapropistas— is printed and distributed, with approved jobs ranging from "waterboy" to "grinder" to "barber."

The list may seem expansive, until you consider what's not on it. "Tattoo artist" has never been granted explicit approval, which, until now, has worked out fine. In a world as aggressively regulated as Cuba, it sometimes behooves you to slip below the radar. Tattooists, for instance, are not required to go to school to practice their craft—as is the case with much of the country's workforce—and they are allowed to set their own prices, a boon in a Communist economy where a doctor earns roughly the same wages as a gardener. Nor are they required to pay the licensing fee—somewhere between 20 and 300 pesos a month—imposed on professions officially approved in the book.

Che is something of an icon in Havana's skate culture, and has been inking foreigners and locals alike in his trademark cartoonish style for the past 20 years. He seems to know everyone—to walk down the street with Che is to be stopped constantly by friends and fans looking to chat. After each exchange of pleasantries, Che explains he's been shut down, to the surprise and dismay of his acquaintances.

Nobody knows what spurred the tattoo crackdown. The internet is virtually nonexistent in Cuban homes, and even making phone calls is expensive. Granma, the party's official newspaper, is a hollow PR vessel far from resembling anything like a balanced news source.

Stanching the flow of information is a convenient tactic for keeping people from organizing, or moreover, digging deeper into the pesky questions of "why?"—a query you can pose in Cuba over and over and receive only a resigned shrug. This shrug, as I learned within a few days of my arrival, is most Cubans' blanket response to queries regarding the motives of the government.

“Nobody knows. Not even the inspectors know—if you ask them, they don’t know," Che told me. To ask "why" in Cuba is futile, but I did, anyway, repeatedly, with multiple people. "I don't know," was the refrain I heard each time. "Nobody knows." 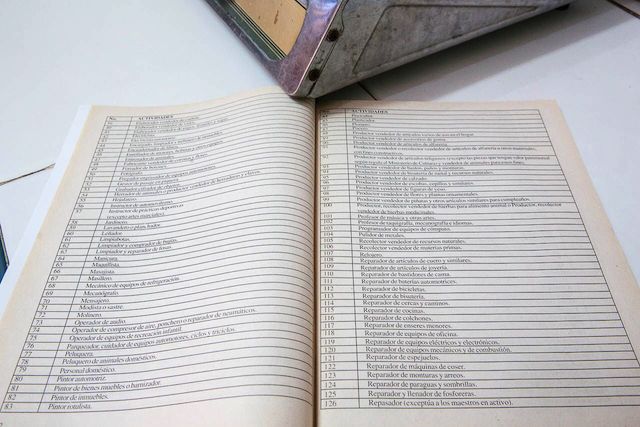 Creating a tattoo license would present quite the logistical challenge for the Cuban government. Che's lawyers tell him that in order to have a prayer, it will first have to be approved by three separate governmental branches: The Minister of the Economy, the Minister of Public Health and the Minister of Culture. How hard will it be to coordinate all three of those arms?

Che said he's all for becoming recognized as a legal cuentapropista. "You want to make a license, we’re not against that—actually, we’ve asked for the license many many times," he said. But he's angry at the haphazard way the government is going about the process. "They don’t tell you you’re doing something illegal, because in the moment, it wasn’t illegal," he said. "There is no specific law we are breaking."

It's hard to pin down the number of tattoo artists in Havana, considering their unofficial status.

Leo Canosa, 40, opened La Marca, the country's first designated tattoo shop, in a Habana Vieja storefront in January. He hasn't been shut down yet, but he's expecting the knock any day now. The ground floor serves as a sort of cultural space and meeting center, and tattooing takes place in a separate room upstairs.

Like Che, Leo has been tattooing for around 20 years. He's sunk all his money into opening the shop and buying professional equipment. Because tattooing is not regulated by the government, health standards are tied to the whims of individual tattoo artists. It's hard enough to get ink and needles, which must be brought in from abroad by those lucky enough to be allowed to travel or have foreign friends. Bulky autoclaves are even harder to procure, and are often lifted from hospitals or foregone altogether.

Leo has taken care to ensure that his space is clean and that his tools are sterile, not that he suspects cleanliness is actually the government's foremost concern.

"I don’t think they're interested in whether it’s sanitary," he said. "I think they’re interested because you have to pay for the license.” But there is no license, I protested.

“Yeah, yeah, it’s true. It’s crazy here," he said. "I think you will never understand it. We can’t understand it either.” 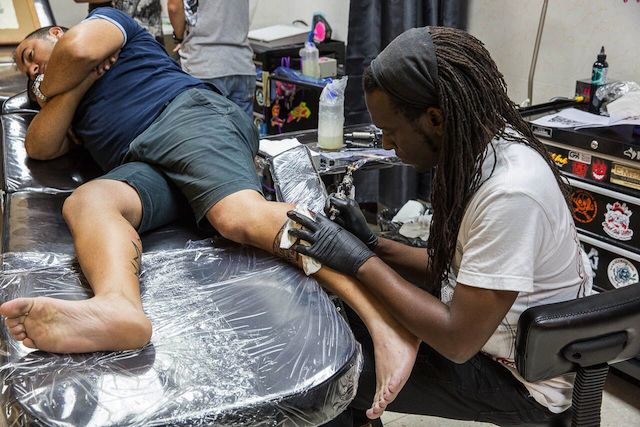 Another artist at work at La Marca. (Tod Seelie/Gothamist)

Che and Leo may not know the reason for the crackdown, but others have some ideas. Ruth Goldberg, a Cuba studies expert based at SUNY Empire State, asserts that the shut downs are simply the government's first, halting steps toward working out the logistics, like establishing baseline sanitation standards and determining which agency will enforce them.

Goldberg also dismisses the idea that the shutdowns are the work of some nefarious government conspiracy against tattoos. "It's such an obvious source of revenue and culturally something that a lot of people want," she said.

"I think it’s purely that Cuba is struggling with how to have tighter regulatory control over businesses in a way which will help to economy to grow," she added. "That things are happening in a totally haphazard and unorganized way just means you were in Cuba."

Ted Henken, who wrote the book Entrepreneurial Cuba: The Changing Policy Landscape, thinks the surprise drop-ins are not borne of concern for public health so much as a strategic flexing of muscle.

"The government periodically reminds Cubans that what they’re doing is not on the list, and they need to stop doing it," he said. "You could use the health issue as an explanation or a justification, but that, to me, is subterfuge. What’s really happening is, they want you to know that you can’t do it until we say you can do it." 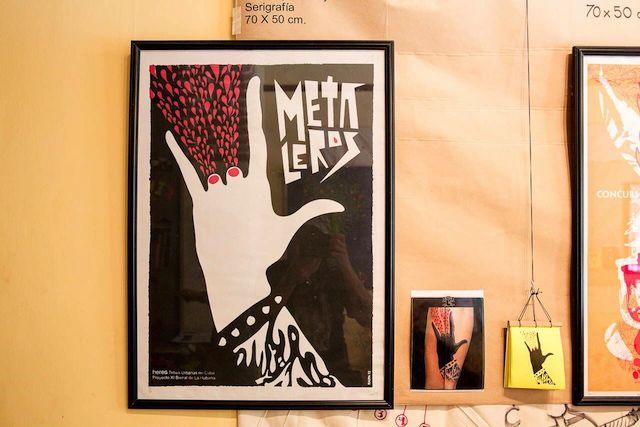 Just a few miles from Che's home, the 2015 Havana Biennial is in full swing. The pieces vary wildly in both form and message, but one by the prominent Mexican tattoo artist Dr. Lakra is of particular interest: A painting, currently housed in the Wilfredo Lam Center, features a shirtless man who wears both the halo of biblical deity, and the tattoo collection of a hardened punk. Such irony is the hallmark of Cuban life.

Che isn't exactly worried about going to jail. But the dull thrum of anxiety that buzzes constantly in the back of his mind has impacted his ability to focus fully on his work.

“I don’t want to be scared in my own studio, and not know when someone is going to knock on my door and take away my stuff," he said. "If you need me to pay something, of course I’ll pay something. In every other country, you have to pay taxes for what you do. They're just learning that here now."

Che hopes that someday he'll be able to tattoo again, but for now, he's given up. He hasn't worked since the inspectors came, making money instead doing odd jobs. He managed to hang on to his tools and could work illegally, but he won't.

"It’s been 20 years of living my dream and doing what I love," he said, resigned. "But I'm just too old for this shit."