Why Is The A.C. Broken In So Many Subway Cars This Summer?

Because the sun apparently isn't pounding hard enough and the air isn't quite moist enough this sultry August, the MTA has been treating its ridership to air conditioning-free subway cars—on a daily basis, according to a steady stream of complaints directed at the MTA's @NYCTSubway Twitter account.

This morning, @NYCTSubway has already responded to 16 tweets about subway cars without a/c.

According to the MTA's Twitter replies, the best way to report a subway car with no air conditioning is to tweet or call-in a complaint to 511, and provide the car number. But Twitter also allows us to trace complaints by train car, which seem to be eliciting more frustration than resolution. In the case below, it appears a particular car remained sweltering despite numerous complaints across multiple days this month.

Does anything happen when you report subways with broken ACs? Car 1879 seems to be having ongoing problems. pic.twitter.com/H71eguWbHd

Here's an example of a typical exchange between a rider, and the MTA.

@aLilLouda Regrets for any inconvenience or discomfort. If possible, please provide a train car # so we can notify supervision. ^BD

@aLilLouda Good Afternoon, regrets for any inconvenience, we’ve made supervision aware of this matter Ref# 160809-000329 ^TCB

WNYC reporter Jim O'Grady documented his attempts to follow up on a reference number like the one issued above. He recently tweeted that the MTA's response was several days coming, and was ultimately unsatisfactory.

5) Terrible answer! It took too long & says nothing about whether the car was fixed. The whole point of a Ref# is to make @MTA accountable.

These tweets give a sense of the levels of frustration.

@NYCTSubway This might be the hottest, most stifling subway car ever. No AC and no air circulation. Uptown 6. 2108 pic.twitter.com/mpctw1GfRu

Hey @mta @NYCTSubway when the 'feels like' temp is 102 degrees, can you maybe dispatch some subways with working AC during rush hour?

Citizen activism might be alive and well, but is it helping? The MTA press room hasn't responded to our multiple requests for comment over the course of several days (we even DM'd the MTA on Twitter; they sent us back to the press room), but New York City Transit Riders Council Chair Andrew Albert was able to provide some context and insight this week.

For starters, the complaints seem to be concentrated on the older train cars in the system, including the R32s, which date back to the 1960s. MTA spokesman Kevin Ortiz mentioned this fleet when we approached him with similar questions in the summer of 2011. "This car class is the oldest in the system," he said of the R32s at the time, adding, "needless to say, maintaining the air conditioning equipment on these older cars can be a challenge."

Albert was more blunt: "We've had a longer spate of intensely hot weather then we have in a long time, and that's murder on these older trains." Other train lines with high concentrations of old cars include the 1, 3 and 6, and J. (As for the hottest stations in the subway system, WNYC compiled this helpful map last summer.)

On the other end of the spectrum, riders on the Q, N, E, 4 and 5 trains benefit from newer cars with more durable air conditioning systems.

Last month, MTA spokesman Kevin Ortiz elucidated a key difference between older and newer subway cars for WNYC. The newer cars "have separate HVAC systems, where if one fails, you can use another within that car," he said. HVACs in the newer cars can also be removed for repair work, meaning that car can remain in operation during repairs.

Not so for the older cars. When it comes to fixing the A.C. on those older models, Albert said that the MTA is likely weighing pros and cons. In order to repair the air conditioning on a car, "That train has to go into the yard, a replacement car is put into place, and it takes the entire train out of commission, briefly," he explained. Because the car-switch can cause residual delays, "That might not be serving the public." For this reason, "they might wait until the train is scheduled for routine maintenance."

"The newer cars, as they come into the system, these kinds of problems should be eliminated," Albert predicted. But the next big order of new cars likely won't be in for the next year-and-a-half, thanks to record delays in finalizing the 2015-19 MTA Capital Plan. Another large order, including the new open gangway cars on the A line, is also behind schedule. The RFP went out last month. "Capital Plan delays delayed car orders, which then delayed the [new cars] getting to the public," Albert said.

We'll let you know if the MTA gets back to us with any clarification on its AC-fixing policy, and the timeline for repairs. In the meantime, your best option might be to close your eyes and imagine you're in a spa. 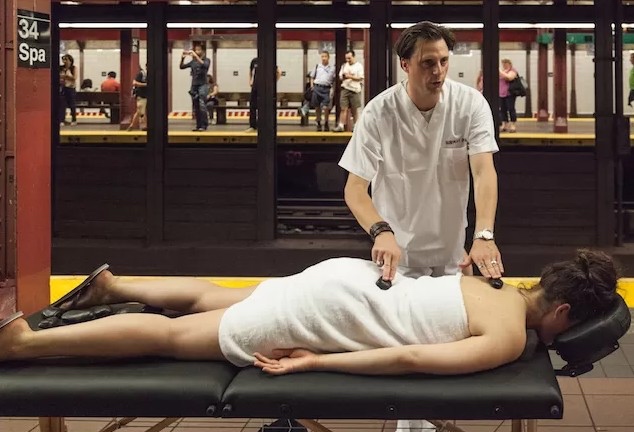 [Update 8/18]: This piece has been updated with further details about the HVAC systems on older trains.

#citizen activism
#complaints
#hot
#melting
#MTA
#subway
#original
Do you know the scoop? Comment below or Send us a Tip