Why Is Our Dirty Subway System Such A "Stomach-Turning Insult"?

Comptroller Scott Stringer's number crunchers have spent a year and a half contemplating the state of the city's subway system and have determined—drumroll please—that "the physical appearance of stations ... remains poor."

"Our auditors observed rats scurrying over the tracks and onto subway platforms, and it’s almost as if they were walking upright—waiting to take the train to their next meal," Stringer said in a statement. "This is a daily, stomach-turning insult to millions of straphangers, and it’s unworthy of a world-class city.”

Okay, so that isn't news. But in his audit (PDF) Stringer also takes a stab at identifying a cause for the peeling paint, rat colonies, and mounds of trash, one that's easier to address than the legacy of Robert Moses, decades of government neglect, mounting debt, and management by political insiders. According to the MTA's own guidelines, cleaning crews are supposed to visit each station once every three weeks and bag garbage lining trackbeds, but they don't always do it. In fact, 97 percent of stations received fewer cleaning visits than advised, and 88 percent got cleaning visits at less than half the recommended frequency. And when cleaning crews did show up at a given station, they didn't necessarily clean all the tracks.

Also, the two fancy vacuum trains bought back in 1997 and 2000 to suck up refuse from the trackbed are supposed to run seven days a week, but often don't because they're broken down. One was out of service for 311 days of the year audit period, and the other missed nearly half the year due to equipment failure. When they do run, because of their design, they are only able to clean a third of the track at a time. To make three passes would disrupt overnight train traffic, so the vacuum train drivers, when they're running, just do a single, one-third-of-the-track-clearing pass and call it good. And because of the potential for track damage from high-intensity vacuuming, the trains are always run on the Low setting. The result is that a once-over from a vacuum train can look as pathetic as this: 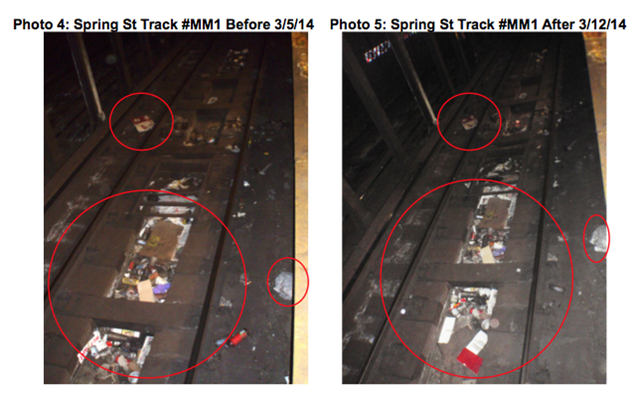 Another set of photos shot in the Bleecker Street station appear to show the trash load actually get worse following a vacuum train visit. 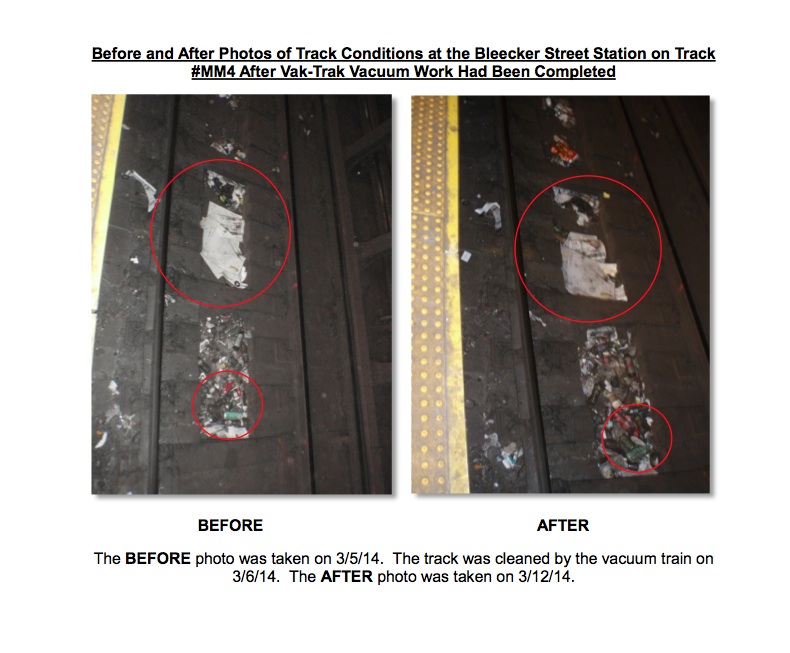 Still, something is better than nothing, and nothing is what some stations are getting. Twelve percent of 33 stations visited didn't have their tracks vacuumed at all from the summer of 2013 to the summer of 2014, the audit reports. In addition to providing feasts for our rat overlords, litter is fuel for track fires.

As for peeling paint, which about three quarters of all subway stations have, the transit agency has a goal of repainting stations once every seven years, but officials told auditors they abandoned that goal back in the '90s. Peeling paint is supposed to be used as a factor for prioritizing stations getting so-called Fast Track repairs, but often isn't, and when decaying stations do get the Fast Track treatment, repainting often isn't done, the investigators found.

In a response to the audit, the MTA agreed that there is a lot of work to be done as far as getting the system clean. Transit officials noted that the Authority is in the process of buying three new vacuum trains that can cover the whole track and are more reliable, at a cost of $23 million. The agency also said that it plans to be more systematic about deploying staff to pick up track litter by hand, and that painting during Fast Track work isn't always possible because it can conflict with track, signal, and electrical work. An MTA spokesman said the amount of trash in stations has actually "significantly improved" since 2008. God help us all.

The audit does not address big-picture problems such as funding the goddamn subway system, or what effect the MTA's counterintuitive pilot program of removing trash cans from stations is having on track litter.

#audit
#Mexico City doesn't have to put up with this
#MTA
#new york city transit
#peeling paint
#rats
#robert moses
#scott stringer
#subway trash
#to live here is to be disgusted
#original
Do you know the scoop? Comment below or Send us a Tip