Why Is NYC Destroying A Thriving Immigrant Economy To Bail Out The Mets' Owners?

In his last days in office, Mayor Bloomberg scrambled to put the finishing touches on his signature project for Queens: the redevelopment of Willets Point, which involved removing hundreds of small business owners to build a new shopping mall and parking lot. In early October of 2013, the City Council approved the plan, all but sealing the fate for workers who had been laboring in the auto work shops that currently populate the beat-up 23-acre site next to the Flushing River. A new lawsuit even contends that the city broke the law while approving the project.

Why was the Bloomberg administration so eager to push through a deal that will install yet another mall in Flushing, only blocks away from the just-completed Skyview Parc, a mall that is home to the same low-wage chain stores that will soon grace the entrance to Flushing-Meadows Park? One reason is because the City has long disdained the independent, somewhat unregulated auto businesses operating near a major sports stadium. Another reason, and one of the least remarked upon, is Bloomberg's cozy relationship with the owners of the Mets, his friends the Wilpon family. Mets owner Fred Wilpon (and, by extension, Citi Field) has teetered on the brink of ruin since the Bernie Madoff Ponzi scheme fell apart—in addition to taking a financial hit when Madoff went down, the Wilpons were accused of being complicit in Madoff's scheme. 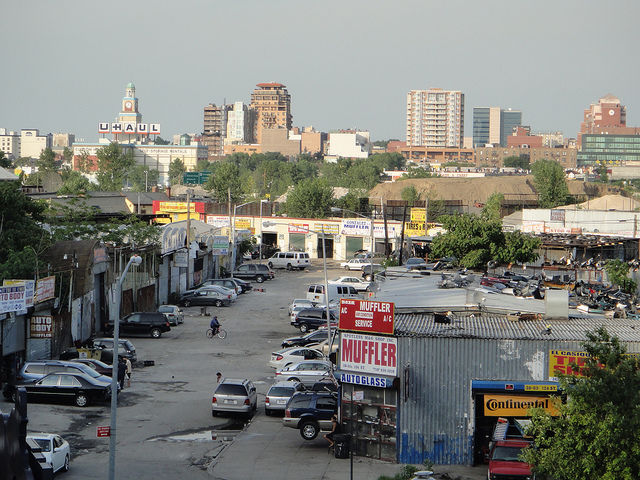 When Bernie Madoff was found to be ripping off investors in 2008, few knew that the fallout would reach the baseball diamond. And yet, when attorney Irving Picard went after those behind the Madoff scheme on behalf of defrauded investors, he sought hundreds of millions of dollars from the Wilpons, alleging not only that they knew about the Ponzi scheme, but that Madoff had advised them on how to structure contracts for Mets players.

While desperately working on reaching a settlement with Picard, the Mets slashed their personnel budget, contributing to a precipitous fall in the standings that continues to this day. But throughout the litigation, the Mets owners insisted that they were not only solvent, but thriving as businessmen. This was simply not true—their company, Sterling Equities, which focuses on commercial real estate—but also includes the Mets and their cable company, SNY—took on huge amounts of debt while trying to recover from their losses from the Ponzi scheme, eventually exhausting their credit line from banks and having to take out an embarrassing $25 million worth of loans from Major League Baseball, just to keep the lights on at their new stadium.

Capital New York’s Howard Megdal laid out the sorry state of the team’s finances in 2012, after they sold off some minority shares in the team. Simply put, the Mets finances were bad. Real bad. So they had to leverage everything they could get their hands on to keep themselves afloat.

In an email to Gothamist, Megdal elaborates:

[The Wilpons] have been tapping out their equity stakes in the Mets and SNY to stay afloat for the past few years, first by selling minority shares in the team, then by increasing their debt against the network to more than $600 million. To the extent that Willets Point can alter a picture so dire that the trustee for the Bernie Madoff victims, Irving Picard, determined he'd never get any money from them if he won his suit against him, it will be vital to them.

It was at the same time that the Mets were hemorrhaging money that the city began to aggressively push its redevelopment plan for Willets Point. And in June of 2012, Bloomberg announced that the City had awarded Sterling Equities Incorporated (the real estate company controlled by the Wilpons) the contract to redevelop the Willets Point area, with the City's capital fund paying $100 million for demolition, remediation, and infrastructure. The land itself would be sold to the Mets and their partner, Related Construction, for $1. All of a sudden, the Mets had a major new development project on the horizon, all for the cost of a candy bar. Of course there was one thing standing in the way of this mall: all of those auto repair shops.

For outside observers, it would appear that a project to replace a polluted open-air auto market with a brand new mixed-use neighborhood would be to the benefit of both the city and community. Obviously the owners of the auto shops (largely Latin American immigrants) would receive the short end of the stick, but that’s just how cities develop. To build housing projects, you have to clear out supposed slums.

However, after the Wilpons and the Bloomberg administration announced the deal, the grand scale of the project was reduced from a lively, green neighborhood—complete with affordable housing—to simply a new mall and parking lot. It should be noted that Flushing, and central Queens in general, does not hurt for malls; quite the opposite in fact.

By the time the current iteration of the Willets Point development project finally reached City Council for approval in 2013, much of the original plan had completely disappeared. Instead of 1,920 units of affordable housing, only 875 units were included. But critics suspect that even those will most likely never even be built. While phase 1 of the project calls for the mall and parking lot (which is to begin construction immediately), phase 3 is the one that contains the housing units.

Phase 3 is scheduled to be developed in 2025, but only if the Mets consider the housing units to be good for business. If the Mets don’t ever build the housing (which was the main concession to nearby communities) they will only face a $35 million fine, a drop in the bucket for a potential windfall commercial project.

Councilwoman Julissa Ferreras, who represents the Willets Point area, dropped her opposition to the project after the Wilpons agreed to make a $15.5 million donation to a non-profit she controls, which looks to revitalize Flushing Meadows Park. "They know I expect them to contribute," Ferreras told City Limits last summer, pointing at the Mets stadium, implying that if they wanted to develop land, they would have to donate money to her non-profit. "I am knocking on their door."

In an interview with Gothamist, councilwoman Ferreras said that the timeline for the affordable housing was contingent on the building of exit ramps from the Van Wyck expressway, something that has yet to be funded by either the developers or the city. Until those are built, there can be no housing on the site at all.

“I have asked the city to find other lots where we can build affordable housing right now," Ferreras said. "This was not part of the original plan. At the end of the day, we have a potential for 330 new units in addition to the 875 that will hopefully be built sooner than 2025.” 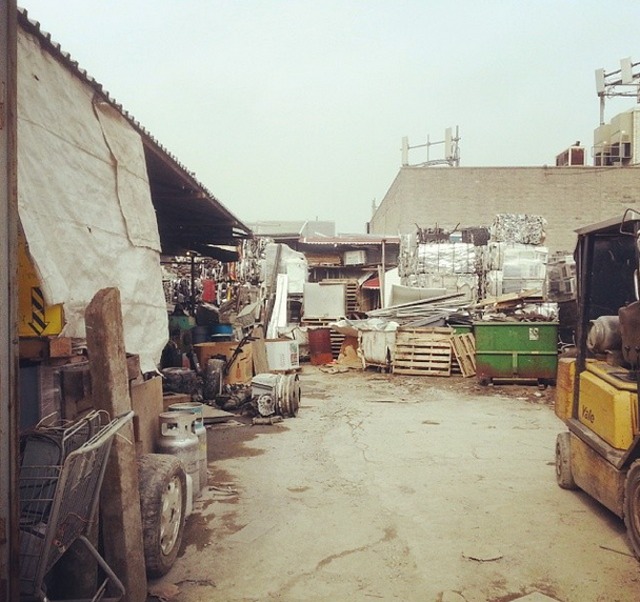 Sterling Equities' spokesperson did not respond to a request for comment, but we spoke with Seth Pinsky, who was president of the city's Economic Development Corporation when it chose the Related and Sterling Equities bid for the land. Pinsky argues the $1 price tag was the highest that the project would bear, because of the state of the economy at the time of the proposals.

"We got three proposals," Pinsky explained. "One was to build a mall with no housing, and that wasn't what we had asked for in the request for proposal. The one proposal that realized the various elements that we had envisioned was the Related/Sterling proposal. It was a very easy decision on that proposal."

When asked why the project had been reduced to a mall anyway, Pinsky disputed this characterization. "The first thing that's going to happen is the site is going to be fully remediated. One of the most important parts of the plan was to clean up the site. Second of all, the first phase also includes some retail and a hotel on the Willets Point site. And a mall provides services and jobs that are needed for the community. Third, the city will get back the remainder of the land, if the development company doesn't in fact build the rest of the project."

Some locals aren’t buying the idea that there will be anything more than a mall on the site for decades to come.

“Giving our land over for free, we deserve better,” Arturo Olaya, a car shop owner in Willets Point told me in his office above the shop on a cold February morning. Willets Point, despite a series of evictions by the city to move out business owners, remains active, with several businesses still fighting for a better deal on their relocation or reimbursement. “Ferraras made a deal without us so they could build a mall. Why would anyone want a mall?" Olaya asked. "The jobs there are no good. Where are people going to get their cars fixed? The dealerships? We give good prices, and the community needs us.”

Part of what local politicians have been trumpeting as a major victory for the shop owners is that the city is paying $9 million in relocation costs, as well as trying to secure leases for the car shop owners elsewhere. Indeed, just this week, a group of car shop owners agreed to move to Hunts Point in the Bronx.

“Hunts Point? They already have car shops there," Olaya said. "Also, it’s far away from Queens, where the workers live. They’re just trying to get rid of us.”

Some residents of Hunts Point, which already has the highest rate of asthma in the city, are less than thrilled about this development. 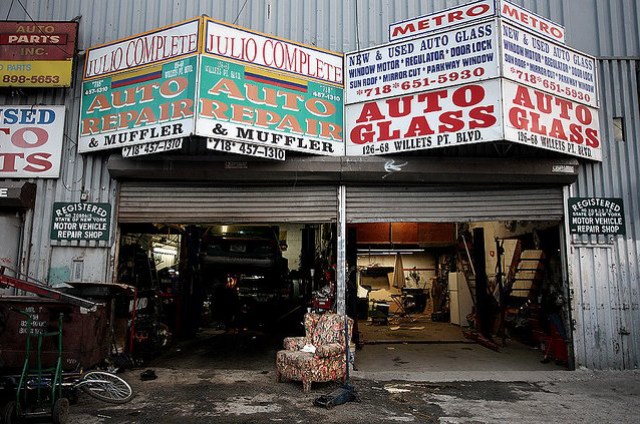 Walking around the decimated streets of Willets Point, it really does feel like you’re in a different world. With dogs roaming the streets and car shop employees jockeying for a chance to fix your bumper, it seems like the furthest possible place from the cold, sterile transaction of a shopping mall. And yet, in just a few short years, this is what will become of the neighborhood.

This offseason, the Mets' biggest signing was Curtis Granderson, an injury-prone power-hitting centerfielder whose best years are behind him. But this was supposed to be the year that the Mets were finally able to spend money on a good team. Their refusal to do so shows just how shaky their finances remain as attendance at Citi Field continues to plummet.

But thanks to the city’s willingness to bail them out, the Mets and Sterling Equities will likely remain in Flushing for decades to come. In December, the developers who received the land for $1 asked for $43 million in tax breaks. They also expressed a desire to open a casino in the development.

Some of the lawyers behind the lawsuits trying to delay the Willets Point development admit that they’re simply buying time in hopes that the new administration will somehow intervene. One lawsuit, which alleges that the city improperly sold parkland to the developers, does stand a chance of delaying, or even stopping the project in its current incarnation. Mayor de Blasio has remained quiet on the development, which can be seen as a bad deal he inherited and doesn’t stand to gain politically by interfering with. A mayoral spokesperson did not respond to a request for comment about the project.

Despite all of the corporate welfare handed out by the City of New York, and the destruction of an entire small business community, the Mets outlook still looks absolutely abysmal this Spring. They couldn't even get that right.

#bloomberg
#development
#mets
#willets point
#wilpons
#longform
#original
Do you know the scoop? Comment below or Send us a Tip