Why Focus On Civic Engagement? Because 'Democracy Is A Full Contact Sport'

It’s clear that people were — let’s just use the word — engaged this election season, and they have the voter turnout numbers to show for it. Preliminary figures show that 37 percent of registered voters in New York City turned out to the polls, an 88 percent jump from the 2014 midterm elections. Of course, such a notable leap is at once exciting and depressing, since turnout went from miserably low to just low.

Nationally, the numbers were a bit higher, with more than 47 percent of voters turning out on November 6th. That’s considered massive by American standards, and while we can and should do better, the turnout on Election Day is something to celebrate.

But our democracy depends on people staying engaged all the other days of the year, too.

Perhaps with that understanding, New York City voters passed a ballot measure on Election Day to create a civic engagement commission, which would implement participatory budgeting citywide and, in theory, have more regular dialogue with community organizations and civic leaders in our neighborhoods. The commission comes after Mayor Bill de Blasio hired the city’s first chief democracy officer, whose work involves getting more city residents voting and making it easier for people to get involved in civic life.

Even House Democrats have said their first order of business in Washington, once taking control of the chamber in January, will be to focus on legislation that “strengthens democracy,” like making it easier for people to vote.

Point is, many are feeling an urgent need to get people involved and engaged in civic life, and to do so on an ongoing basis. That’s why WNYC and Gothamist committed to reporting on civic participation, and answering questions about how to be more civically involved, over more than two months leading up to the midterms. We based our Ask a Reporter project on this notion: For our democracy to function properly, there needs to be more interaction, and more trust, between the public and the officials who make policy. Because right now, there isn’t enough of either of those things.

Greater turnout on Election Day is a step toward rectifying the problem. But it’s just one. Here’s what we learned about how civically involved people are these days, and how to take more steps forward. You can even start small with just your block.

So, how civically engaged are we?

There’s been a push over the last couple of decades to renew the country’s “civic health.” A 2017 report by the National Conference on Citizenship noted an overall decline in traditional civic participation, such as fewer Americans having membership in community organizations.

The report also noted a drop in the national volunteer rate, from 30 percent of the population in 2005 to less than 25 percent in 2015.

Take note: New York City’s volunteer rate, according to a national survey, was far less than the national rate even, at 14 percent.

But beyond the actions that people take, the National Conference on Citizenship report also flagged disturbing trends around trust. Fewer Americans believed they had a say in government, or that public officials cared what they think. Fewer Americans were also trusting each other, giving way to increased partisanship.

Another survey, conducted by the Public Religion Research Institute and The Atlantic in late August, found the majority of Americans had negative feelings about the state of the country. A majority also felt doubtful that people with opposing views can work together to solve national problems.

It’s not all bad.

That same survey found that people responded differently when asked about addressing issues on a local level. More than half of people surveyed said they felt more confident bridging divides within their own communities, believing that people with different politics could work together to tackle local problems.

In New York City, a pilot study looking deeper into volunteering showed that people give their time in all kinds of ways that were not explicitly asked about in the national survey, such as volunteering for their houses of worship.

And it’s important to note that people are engaged in ways that are not fully captured by traditional indices — such as consumer activism, or the innovative ways that people stay informed and engaged through new technology.

In a 2017 policy paper about the need for building civic capacity, authors Hollie Russon Gilman and Sabeel Rahman noted that public officials and the people they serve must have more interaction and partnership.

“While we tend to associate democracy with specific institutional forms such as elections, at its core, democracy is fundamentally about a type of relationship between citizen and state—one where constituencies can mobilize and make binding claims on policymaking institutions,” they wrote.

I called Russon Gilman to talk about the paper and how its concepts align with our reporting about civic engagement. She and Rahman also co-authored the forthcoming book “Civic Power: Rebuilding American Democracy in an Era of Crisis.” My overarching question to her was this: How can we actually cultivate that ongoing relationship with the State, and make sure we have a say in shaping our city — our blocks, even?

“Your civic capacity is not a static thing,” said Russon Gilman. “Sometimes I think about it like a physical muscle. So, how do you train or flex that muscle so that you build capacity overtime?”

Sometimes people just need to find a way in, she said. You then build confidence to take on larger issues; you acquire a sense of savvy on how to get things done.

Our Ask a Reporter project sought to answer questions from our audience about navigating city agencies and figuring out how to accomplish changes within local communities—how to get a mural in your neighborhood; how to tackle a litter problem; or how to become a more informed voter. We attempted to demystify processes and give people concrete steps to take.

“If you don't actually understand who to call and what to ask for, then half the battle is already lost,” said DeNora Getachew, the New York executive director of the civics education organization Generation Citizen. “It's much less likely that you're going to be civically motivated to engage in a process that you don't understand.”

But democracy requires us to be engaged even on these seemingly small levels, said Getachew, because democracy — as she likes to say — is “a full contact sport.” 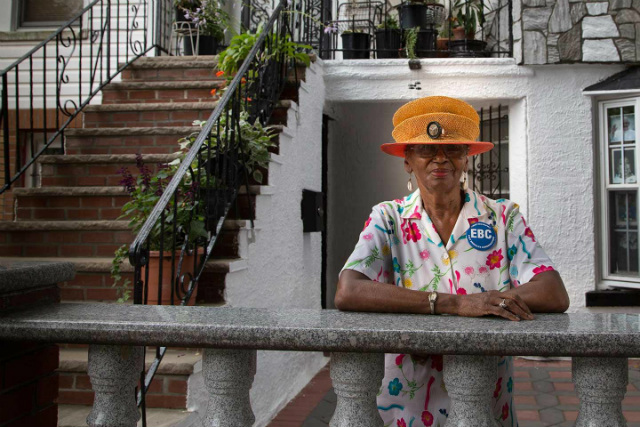 One of the best exemplars of civic-mindedness that I met over the last two months was Blanche Romey, an action-oriented, hat-wearing, 78-year-old long-time resident of Pilling Street in Bushwick.

She moved to her block 38 years ago, after she and her husband bought what she calls a “raggedy” old house in need of major repairs. The block needed work too.

“When I moved on Pilling Street, I said, ‘This place is filthy,’” Romey said.

But she described herself as a worker, and a neighbor nudged her toward action.

“He said, ‘Blanche if you start sweeping from your end to the corner in front of your house, and I do it from mine, it'll be be beautiful.’ I've been sweeping for 38 years,” she said.

Thus began a labor of love on Pilling Street. Emphasis on the “labor,” though.

Along with fixing up the 10-room house, tasks included: forming a block association; getting tree guards in the sidewalks; confronting drug dealers; adopting a waste basket from the Department of Sanitation (yes, that’s a thing); and getting police to focus on a prostitution ring nearby.

Tackling these issues, large and small, required some civic savvy, some time and, in many cases, the help of others.

After years of doing, Romey learned how to organize her neighbors. She also absorbed the teachings of some of the best civic leaders around: East Brooklyn Congregations. EBC is a coalition of congregations and other community leaders that’s part of the larger network of faith groups called Metro Industrial Areas Foundation. Romey was wearing a large EBC button the day we toured her neighborhood.

With the power of a large and decades-old organization behind her, Romey was able to take on entrenched issues, such as drugs and affordable housing, that affected her neighbors. She was also recently part of a successful push to win more affordable housing for seniors.

“Problems are not happening in a vacuum,” said Reverend David Brawley, a co-chair of East Brooklyn Congregations, adding that, to get to the root of an issue, “You can’t go it all alone.”

“To have the most impact you have to organize,” he said. “And by that I mean people have to get together, talk to each other, listen to one another, and discern together in community, ‘What are our issues?’ And then I would say start with issues that you can win. Don’t aim for the fence, get on base.”

Amber Spry, a political science professor at Brandeis University, said people may feel most effective when they go local — hyperlocal — and work with their neighbors to solve a problem on their block or in their neighborhood.

“When it comes to helping people get engaged I think it really does have to come from a personal place,” Spry said. “How can you take what you're passionate about and what you care about to make your community thrive?”

Spry stressed that organizing neighbors to beautify your block, for example, isn’t really just about beautifying your block. It’s about exercising power.

“Having a voice in your community, having an impact on the people around you is not only a way that individuals can empower themselves to make a difference, but it's also something that is so powerful to communities,” Spry said.

Identifying a problem, organizing people to create a solution and then effectively executing that solution takes hard work and perseverance, as we’ve reported. But it’s a power that can be executed on a regular basis — far more frequently than our city’s Election Days.

#ask a reporter
#civic engagement
#original
Do you know the scoop? Comment below or Send us a Tip