Why Do NYC Drivers And Pedestrians Loathe Cyclists?

When we announced that We The Commuters would be spending several weeks reporting on biking in New York City, we got a flood of emails.

Some of you wanted to talk about the thrill of getting on your bike, how it energizes you, makes you feel powerful, gets your heart racing and blood thumping.

But many others wrote to complain about cyclists: mostly pedestrians, saying they felt endangered by reckless bikers. Drivers were no fans of bicyclists either.

So we set out to explore the psychology of what happens to us when we compete for limited road space, and why much of the frustration seems to get dumped on cyclists. We walked the streets, spoke to people on bikes and on foot at the Brooklyn and Manhattan Bridges, chatted with delivery truck drivers, and hung around the break room of a taxi garage to get a variety of road-users’ perspectives.

At #WeTheCommuters, we’ve been getting lots of emails about resentment between people who walk, bike, and drive (mostly pedestrians angry at cyclists).

Lots told us the Brooklyn Bridge is one place where these tensions are highest.

So where am I today, with my trusty @WNYC mic? pic.twitter.com/OwSPgObAwM

First, it’s important to understand how our street design lends itself to interpreting certain actors as “right” and others as “wrong.” New York City’s streetspace is mostly designed for cars, secondarily intended for pedestrians, and only newly incorporating people on bikes.

“What we see as people behaving ‘badly’ is really people just doing what they have to do to survive,” said Dr. Tara Goddard, an urban planner at Texas A&M University.

Goddard’s research focuses on driver behavior and how to make road interactions more safe. She used to be the bicycle and pedestrian coordinator for the city of Davis, California, often lauded as one of the most bike-friendly cities in America.

“We've told bicyclists, ‘Oh, you just need to act like a car.’” said Goddard. “But the infrastructure is all set up for cars and drivers, so we're shoehorning this mode into a system that's not made for them—and is actually really often dangerous for them—and then expecting them to behave a certain way and getting really mad when they don't.”

Another way that expectations factor into how cyclists are perceived: if you think that all cyclists are jerks who break the rules, you’re bound to notice and remember when you see cyclists breaking the rules. Goddard calls this confirmation bias.

“There's a lot of good psychology that says we fall back on those implicit biases or stereotypes when we're under a high cognitive load, when we're in a complex environment, when we're making decisions at speed,” explained Goddard. “And of course that's pretty much exactly the roadway environment.”

There’s also a persistent idea among many pedestrians that cyclists pose a high, fatal risk to them. But the NYPD’s latest statistics don’t support that. In 2017, people driving motor vehicles killed 106 pedestrians. People on bikes killed one pedestrian. As for non-fatal crashes, about 2 percent of all pedestrian injuries involved people on bikes that year.

So if trucks, cars, and buses are capable of doing far more damage than bikes, why do pedestrians seem angrier about cyclists than they do about drivers?

Goddard has one theory: It’s easy to forget that people control cars because drivers are cocooned in their vehicles.

“Whereas if someone’s on their bike, they’re very visibly human,” she said. “And so it’s much easier to focus on and think about resenting this person rather than this kind of amorphous thing that is a vehicle.”

Here’s another theory: New York City pedestrians are a hardened bunch; they’re used to jaywalking, stepping out into street lanes, and weaving between cars. As cycling becomes more popular and normalized, they’ll learn how to co-exist with bikes too. But it won’t happen overnight. 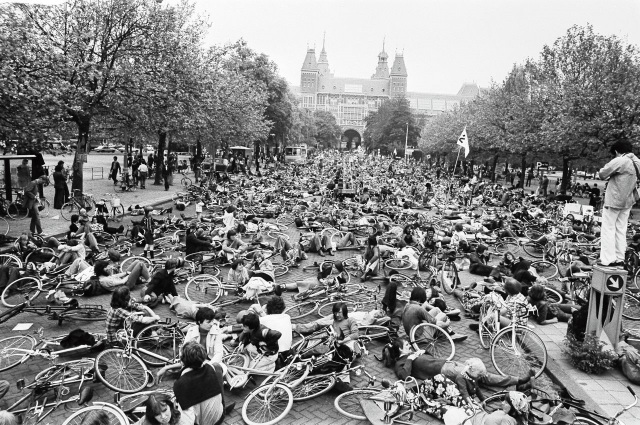 A mass die-in, part of the Stop de Kindermoord actions that took place in across the Netherlands in the early 1970s (Netherlands National Archives, The Hague) 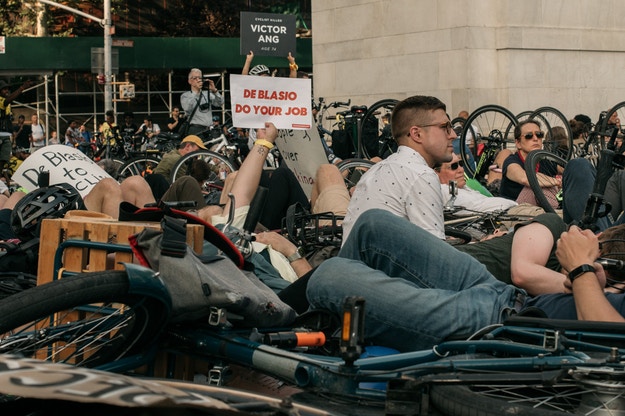 “In the mid 1970s there were about 3,000 annual traffic fatalities across the Netherlands, 450 of which were children,” said Chris Bruntlett, who works for the Dutch Cycling Embassy.

Bruntlett said most historians point to the “Stop de Kindermoord” movement, which literally translates to “Stop Child Murder,” as a real turning point in Dutch cycling advocacy. The name originated with the headline of an editorial written by a journalist whose daughter was killed while biking. It was a startling phrase, and it stuck. 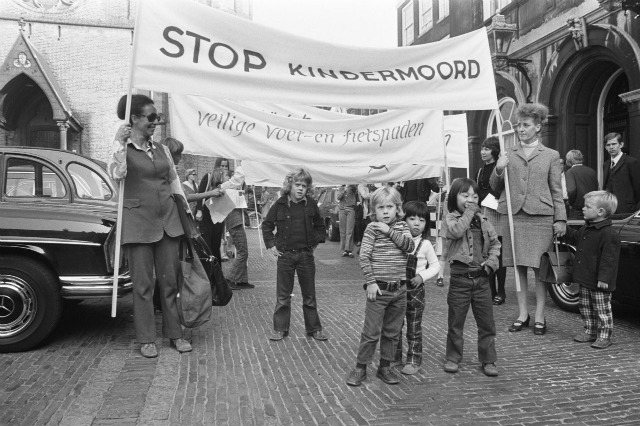 A protest as part of the "Stop de Kindermoord" actions that took place in across the Netherlands in the early 1970s (Netherlands National Archives, The Hague)

“It led to these mass bike rides, really dramatic mass die-ins in public spaces to draw attention to the rising number of people being injured and killed on the streets, to say enough was enough,” explained Bruntlett.

It was the beginning of a decades-long transformation, one that involved citizens electing politicians who recognized the importance of bicycle infrastructure and who began codifying these principles in city planning policies.

Bruntlett described New York City as a bike policy “trailblazer” in North America, and he credits the Bloomberg administration and former NYC DOT Commissioner Janette Sadik-Khan with setting the bar high. We now have about 1,240 miles of bike lanes in the city, a third of which the DOT calls “protected bike lanes,” although not all are separated by a curb-like barrier. 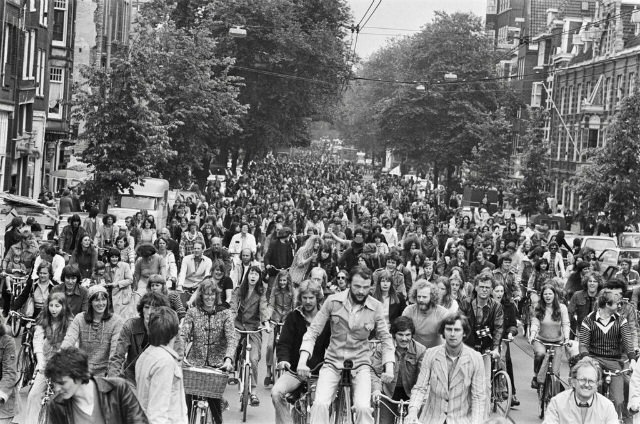 A ride as part of the "Stop de Kindermoord" actions that took place in across the Netherlands in the early 1970s (Netherlands National Archives, The Hague)

When asked what he thinks about New York City’s piecemeal approach to installing biking infrastructure, which often results in a compromise of paint-only bike lanes, Bruntlett said it’s not setting our city up for success.

“If the Netherlands shows anything, it’s that we have to set our standards higher and actually provide physical separation between bicycles and cars,” he said. “If a cycle-way is not built for all ages and abilities, then it’s really of no use.”

Sometimes, he says, infrastructure change needs to lead the way for cultural change.

“We’ve gone two or three generations completely ignoring the bike,” said Bruntlett. “It’s only now that we’re rediscovering it. And it’s going to take time again for people to start cycling without thinking it’s a lifestyle choice or a political statement.”